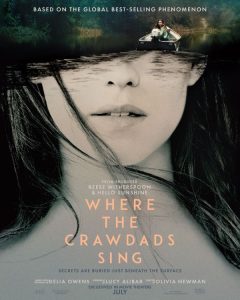 Actress Daisy Edgar-Jones made a big name for herself with her brilliant performance in the Hulu miniseries NORMAL PEOPLE two years ago and since then, Hollywood has been beckoning. She was very good in the horror movie FRESH, aced a supporting role in the Hulu miniseries UNDER THE BANNER OF HEAVEN, and now is headlining the big-screen adaptation of Delia Owens’ 2018 bestseller WHERE THE CRAWDADS SING. Edgar-Jones gives it her all in a wonderfully physical and earthy performance, but almost everything else around her seems to be working against her gritty work.

Gritty is the key word too because the story of Catherine “Kya” Clarke is nothing if not that. Born to white trash, living in a ramshackle home out on the edges of a North Carolina marsh in the early 1950s, Kya is a girl more comfortable swimming in the muddy swamps, communing with nature, and walking everywhere barefoot than honoring any societal norms. Abandoned by her family, Kya grows up on her own from ten years old on, not attending school, and barely engaging with anyone in the small town of Barkley Cove. Known as the “Marsh Girl,” Kya is gossiped about by the townsfolk as half-human/half-beast, a feral child with eyes that might even glow red in the dark.

Indeed, there is something intensely intuitive about the way Edgar-Jones plays such a role, not to mention the untamed way that Jojo Regina essays the younger version of Kya. They both prowl more than saunter, look wholly comfortable in the boggy surroundings, and create a character defined by physicality more than words. So, with two actresses bringing their A-game, why did director Olivia Newman decide to gussy them up so? Both actresses look far too bathed and brushed throughout the story. If Kya is supposed to be so natural, why is her skin so clean and creamy most of the time?

It’s almost as if the filmmakers were afraid to make Kya too weathered, too rough-hewn, and too unkempt, but that’s the character. And yet, her clothes always look immaculate and wholly feminine versus what a young girl with little connection to the outside world would think to wear. The cleansing doesn’t stop with Kya either. The marsh looks far too pristine, as does all the perfect sunlight, and most of the mannered production design. Quite simply, none of what Newman et al. have created here feels lived-in enough. Such erroneous choices prevent a compelling story about independence and naturalism from digging deep enough.

The film had the potential to be more of a truthfully realized character story, or at the very least, the crackling murder mystery it wanted to be. Kya first becomes involved with childhood friend Tate Walker (Taylor John Smith) in her teens and then with the well-to-do Chase Andrews (Harris Dickinson) in her early 20s, leading to a love triangle and an apparent homicide. When Chase is found dead in the bog, the circumstantial evidence points to Kya and she ends up standing trial for first-degree murder. Most of Lucy Alibar’s earnest adaptation of the book’s prose mixes the courtroom drama effortlessly with flashbacks to Kya’s troubled life to underline the evidence presented during the legal proceedings. But even with those elements working smoothly, homogenization starts to seep in.

The two leading male characters are far too buff and polished-looking to be believable. They’d fit more in an Abercrombie & Fitch ad than in a seaside town. Tate is supposed to be a shrimper’s son, and Chase, a rough-and-tumble star athlete in high school, so why are their haircuts, clothing, and complexions as idealized as an airbrushed Instagram post? Only David Strathairn as Kya’s wily lawyer Tom Milton has the look and lived-in feel of a townie. His suits are always wrinkled, and his hair is perpetually mussed, suggesting a man who struggles with the location’s burgeoning humidity.

Unfortunately, other elements feel off too. The centerpiece trial too often pushes towards the melodramatic with some overwrought supporting performances. On the opposite end, the sex scenes pull their punches completely, going out of their way to resist any suggestion of nudity. Sadly, most of Owens’ attempts at giving the story some Agatha Christie suspense peter out too as there are only two possible suspects on view, and one of them is a herring as red as his evidentiary knit cap.

Edgar-Jones is the real deal, however, an actress who can communicate as much with her gestures as with her vocal delivery. She’s played outsiders in most of her biggest projects so far and yet if you saw how she can turn on the confidence, wit, and sensuality as she did in NORMAL PEOPLE, you’d realize that Hollywood isn’t utilizing her full range. Here’s hoping that her next role will let her rip more, and not sanitize her efforts. 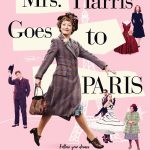