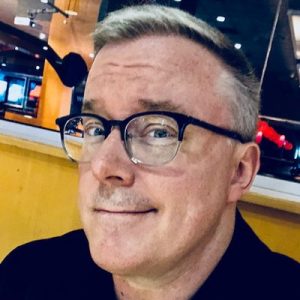 How did I become a film critic who writes a blog? Well, in 2011, I was inspired by friends who know me to start chronicling my thoughts on the movies I see. Thus, The Establishing Shot was born. It is now read in 27 countries and helped me become a charter member of the Chicago Indie Critics. This blog also got me hired by the Examiner to be a film critic of theirs online back in 2012. (I did that until the magazine shuttered in 2016.) The Establishing Shot also led to getting hired by Creative Screenwriting magazine online to be their critic too.

Before this, I spent decades as a creative director in the world of Chicago advertising. I also illustrated caricatures and cartoons for the Chicago Tribune for many years, and continue to do so for various periodicals, everything from Playboy to W magazine, and of course, this blog. I’m a freelance writer today who works for ad agencies, publishing houses, and all kinds of other independent contractors.

I’m also a proud member of the International Screenwriters Association. I was not only picked as one of their “25 Screenwriters to Watch” in 2018, but I hosted a weekly podcast for them entitled “Page 2 Screen” for three years. Some of my scripts have been optioned too, though I’m still waiting to see one up on the big screen. (Would I have to review it if that happened?)

I’ve lived in Chicago since college and have been a SAG-AFTRA member almost that long too. I enjoy theater, travel, cats, dogs, and quality television, and occasionally write about the small screen here at The Establishing Shot as well.