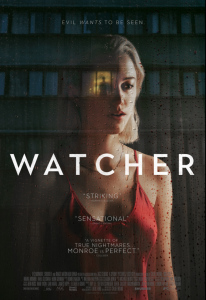 The new thriller WATCHER is ostensibly about voyeurism, stalking, and paranoia as a young woman in Budapest suspects that a neighbor across from her apartment window is watching her. However, what the film really is about is how women are constantly under the scrutiny of the “male gaze” – being ogled, scrutinized, and devalued. It’s a slow-burn piece, building up its sense of dread with methodical care, all the while making a larger case against the subjugation of women and how rarely they can feel safe in any environment.

Julia (Maika Monroe) and Francis (Karl Glusman), a young American couple, have relocated to Budapest for his marketing career. Right from the start, during the cab from the airport to the city, it’s apparent that the marriage has problems. Julia seems detached and Francis tends to talk over her. Then, when the brusque cabbie tells Francis in his native tongue that Julia is beautiful, her hubby responds in Hungarian, laughing it off. That sits poorly with Julia, who doesn’t like feeling objectified, especially couched in an unknown language.

At their apartment, Julia continues to feel out of sorts. She is a former actress who found show biz repellent and now is stuck in a country completely foreign to her. When Francis makes love to her on the couch to feel better, their tryst is exposed to the neighboring buildings by the apartment’s large, picture windows. Afterward, Julia notices a shadowy figure in one building watching her. Is he a creep or just curious? And is he the same fellow who’s following her about town the next day?

Julia expresses her concerns to the overworked Francis, but he’s inclined to blame it on an over-active imagination than the actions of a genuine predator. Even when she swears a man followed her from a movie theater into a convenience store, Francis holds back his support. The creeper is caught on tape, but it’s still not enough to light a fire under Julia’s husband.

Stymied, Julia takes matters into her own hands, setting out to find out if the neighbor and stalker are one and the same. She starts watching the watcher (played with a stern, poker face by Burn Gorman) and one of the shrewder comments the film makes is how he pays more attention to Julia than her oblivious husband. Another clever conceit concerns the lack of proper neighborly allies to assuage Julia’s fears. Her fellow tenants are all unreliable and grumpy, and even sweet-hearted stripper Irina (Madalina Anea) who lives next door is an unreliable friend due to her comings and goings all day and night.

To tell any more of the movie’s zig-zagging plot would be to spoil all the fun to be had in this superior psychological thriller. Suffice it to say that director/screenwriter Chloe Okuno, working from a script she adapted from Zack Ford, has a great sense of suspense, clearly influenced by the best of Hitchcock and De Palma. And she sprinkles social commentary on top of it all with a sly, feminist flair.

Okuno builds tension slowly, eschewing big chase scenes and histrionic set pieces. Instead, she lets dread seep in through deliberate camera work, tight editing, and a soundtrack as distinguished by its silences as it by its synthesizer. The director has fun finding parallels between protagonist and antagonist too. At times, their gestures, steps, and even clothing echo one another. Okuno even demonstrates some droll humor with her casting of Monroe as the lead. It may be eight years after her breakout horror hit IT FOLLOWS, but Monroe still can’t shake the creeps trailing her.

And when the film’s tropes play a touch too close to similar-themed movies, Okuno infuses her thriller with a #MeToo sensibility to keep it fresh. WATCHER is a chilly thriller, true, but underneath the ice is the fire of a woman raging against men who marginalize her and the horrors that come with such oppression. 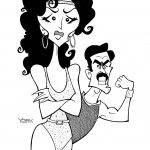 ROSE BYRNE REIGNS AS AN ANTIHERO IN THE 2ND SEASON OF “PHYSICAL”illustrated, news, Review 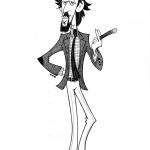