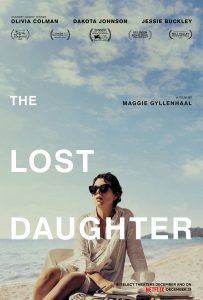 Most horror movies do not create a sense of dread as deliciously as THE LOST DAUGHTER does. Ostensibly a character study of a middle-aged woman trying to enjoy a summer holiday on the Greek island of Spetses, the story becomes more and more of a tale filled with hostility, conflict, and danger. Midway, it starts to resemble a jittery psychological thriller, burrowing its way under your skin, and holding the nervous system hostage. Don’t be surprised if you find yourself on the edge of your seat, or struggling to sit still for that matter.

The intensity starts right off the bat as director Maggie Gyllenhaal, also adapting the vaulted novel of the same name by Elena Ferrante, introduces us to lead character Lena (Olivia Colman) staggering onto a beach at night, bleeding, and collapsing in the wet sand. What the hell happened to this seemingly average middle-aged woman in what looks like a vacation paradise?

From there, the story flashes back to Lena’s arrival on the island, and there’s something immediately off about her. She’s not particularly friendly to the genial, older handyman (Ed Harris) who shows her around the apartment she’ll be renting. Nor does Lena seem comfortable later chatting to the beach’s bartender (Paul Mescal). Both men Lena meets are kind, conversational, and even flirtatious, but Lena is guarded, suspicious, a bit of a pickled British pill. Why?

Lena tries to relax in her room, on the beach, at a local restaurant, but she seems on edge almost constantly. She also seems to be quite nosy, constantly looking up from her book to stare at the tourists, particularly a gorgeous young mother named Nina (Dakota Johnson). Nina’s daughter is a handful and soon the drama unfolding triggers Lena to think back upon her own struggles as a young mother. Those flashbacks, showcasing Jessie Buckley playing the younger Lena, suggest that motherhood was something that frayed her last nerve and we watch wondering if Lena is going to harm her young daughters.

It’s a fascinating side of womanhood one rarely sees on film – the mother who’s not all that crazy about being one. Both Lena and Nina struggle with such responsibilities and their shared acrimony brings them together. There are many layers to be revealed of each woman, or in Lena’s case, both periods of her life, as the film explores being female in a way that feels both feminist and frightening. As I said, it sometimes conjures the kind of dread that happens in the horror genre.

Without spoiling the story, Gyllenhaal builds an exquisitely harrowing sit for an audience. Everyone who comes into contact with Lena seems capable of unraveling her altogether, from Nina’s Italian family to noisy teens to middle-aged drunks in a bar.

Colman gives an incredible performance, informed mostly by her expert body language as her Lena has very few lines. Buckley’s younger version is more verbose and she too gives an incredible performance of the complicated and troubled woman. All of the supporting cast is terrific, including a slyly insinuating Johnson and the late-in-the-story arrival of Peter Sarsgaard (Gyllenhaal’s real-life husband) as a seductive professor.

Gyllenhaal’s film reminded me of something that Alfred Hitchcock might have directed; it’s that suspenseful and clever in how the story toys with us. Gyllenhaal completely transports us to this strange and disturbing vacation where the lead character we’re wanting to root for becomes less and less of someone to admire the more we find out about her.

THE LOST DAUGHTER opens in a limited theatrical release today before dropping on Netflix on December 31st. It’s one of the very best films of the year, establishing Colman as one of our greatest actresses, Buckley as one of our greatest younger ones, and Gyllenhaal as an incredibly talented and intuitive filmmaker. See it, but by all means, be prepared to be shaken. 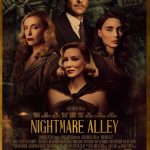