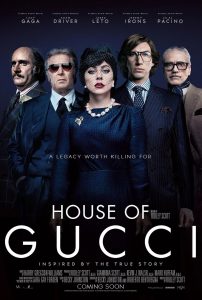 Legendary filmmaker Ridley Scott has mastered many genres in his illustrious career: science fiction (ALIEN, BLADE RUNNER), war (BLACKHAWK DOWN), action/adventure (GLADIATOR), true crime (ALL THE MONEY IN THE WORLD), and the character study (THELMA & LOUISE). Heck, the directing virtuoso even shot the most famous commercial of all-time with his classic Apple spot “1984.” But with his latest release HOUSE OF GUCCI, Scott proves that dark comedy is not one of his forte’s. For my money, his take on the material may be the biggest botch of his career.

There are moments hinting at the brilliant dark comedy that HOUSE OF GUCCI might have been. The script by Becky Johnston and Roberto Bentivegna tells the true 1995 story of how a vengeful Patrizia Reggiani (Lady Gaga) hired two Italian thugs to murder her ex-husband Maurizio Gucci (Adam Driver). And throughout the 157-minute running time, we are introduced to awful, loathsome people in the Gucci orbit. Unfortunately, Scott treats them all too sympathetically, creating more of a grand tragedy here, with far too much pity for Patrizia and the troubled Gucci clan.

Perhaps directors like Edgar Wright or the Coen Brothers would’ve aced this dark material, but Scott approaches it like it’s a companion piece to ALL THE MONEY IN THE WORLD. That film deserved seriousness and sympathy because there was genuine tragedy in how billionaire J. Paul Getty refused to pay his grandson’s kidnapping ransom when the boy’s penniless mother could not. But the Gucci’s are not worthy of such pathos, and Scott fails to rake the brood across the coals as profoundly as he should.

In the story, Patrizia keeps telling herself that she married for love, but her actions show that she was wholly ambitious, ruthless, and selfish. Lady Gaga plays her too earnestly by half, never suggesting the self-awareness that clearly such a gold digger had to have. Make no mistake, Gaga is a very talented actress as her roles in A STAR IS BORN and AMERICAN HORROR STORY have proven. But she plays her character as a victim, and Scott encourages her to dial up the hurt in every instance she can. If Gaga had given the role some of the curled-lip knowingness that Patti LuPone brought to Eva Peron in Broadway’s EVITA, her performance might have been deeper, but as it stands, it’s stuck in the shallows.

So, why does Scott treat these characters so sympathetically? Head honcho Aldo Gucci (Al Pacino) is hardly worthy of our pity as he’s a vainglorious old buzzard who cheated on his taxes for years. His son Paolo (Jared Leto) is an untalented boob who foolishly fancied himself a designer. The director only really gets Maurizio’s father Rodolfo (Jeremy Irons) right, portraying him, unblinkingly, as the smug, condescending shit that the script tells us he is.

Adam Driver is one of our best actors working today but he’s miscast in the part of Maurizio. The character is a malleable dupe of a rich kid whom Patrizia played like a grand piano, but Driver conveys too much intelligence for such a naif. And Scott wants us to feel really sorry for him even though he let his vicious wife ruin Aldo and Paolo and steal the Gucci company right out  from under them.

Scott lets his actors’ Italian accents drift all over the place too. At times, Gaga sounds Ukrainian and Pacino sounds Borscht Belt. The director also allowed Leto to run wild in an extravagantly cartoonish performance that feels like it belongs in a Jim Carrey farce. The pacing is sluggish too, easily clocking in at 30 minutes too long. Granted, Scott makes everything gorgeous as production values have always been one of his greatest strengths, but this grotesque story should have been presented as far more gaudier.

Late in the film, fashion designer Tom Ford (Reeve Carney) is introduced to save the faltering Gucci empire and Scott finally bares his fangs. He ridicules Ford during the premiere of his first collection for the House of Gucci. Scott impugns Ford for sending a male model down the runway in ass-less pants with his package bouncing in silk underwear. Ford saved the Gucci brand with modern provocation, yet the talented designer gets more of the director’s ire than the idiots Ford was saving.

Scott has been one of cinema’s greatest directors for decades now and he’s directed and/or produced too many brilliant works to list here, but HOUSE OF GUCCI is not one of them. This film may be dressed to the nines, but as successful storytelling, it’s at sixes and sevens. 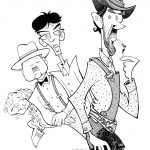 “THE POWER OF THE DOG” DISTURBS, BUT AT ARM’S LENGTHillustrated, news, Review 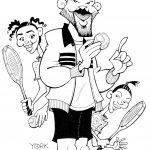