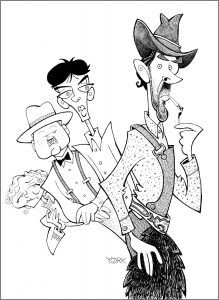 Original caricature by Jeff York of Kirsten Dunst, Jesse Plemons, Kodi Smit-McPhee, and Benedict Cumberbatch in THE POWER OF THE DOG. (copyright 2021)

The story of a bullying cowboy making life miserable for all those around him in 1925 Montana is one of the best acted, most beautifully shot, and eerily scored films of 2021. Yet, despite all the superlatives one can heap upon filmmaker Jane Campion’s neo-western, the term relatable may be elusive. There is a remoteness to the work as characters remain inexplicable, the storytelling is often disjointed, and relatability feels almost out of reach. It all makes for an exquisite and artistic portrait, yet one that feels at arm’s length.

Despite the coldness, Campion accomplishes much in her adaption of Thomas Savage’s 1967 novel. Her artistry is evident from the opening moments as she and cinematographer Ari Wegner create a western landscape both gorgeous and intimidating. Yet, as big and beautiful as those mountains are (New Zealand standing in for Montana), and despite all of the heads of cattle being herded along in the scene, the tense relationship between the two main characters dominates. Phil Burbank (Benedict Cumberbatch) is the take-charge cowboy who badgers all under his command and even pushes his soft-spoken brother George (Jesse Plemons) around like he’s a hindrance. That’s unusual as these two are supposed to be partners, and remain close enough siblings to share a bedroom together. But on the range, no one questions Phil, and every time George tries to disagree, Phil calls him “Fatso.”

Soon after, the Burbank crew settles into a small wisp of a village for some heavy drinking at a local tavern, followed by a fried chicken dinner at the local eatery. There, despite George’s genial hosting, Phil acts like a bull in a China shop. The tension is palpable as he insults the courteous staff, berates the other guests, and snorts about like he’s to the manor born. George lets it all slide, including his brother’s constant belittlement of him, and even sits idly by as Phil berates the teen waiter Peter (Kodi Smit-McPhee). It seems Phil despises the young man’s effeminate manner, as well as the paper roses that he’s sculpted as centerpieces for the tables. Everyone sits there horrified, saying nothing, not even Peter’s beleaguered mother Rose (Kirsten Dunst) who cowers in the kitchen.

Cumberbatch, so likable playing a similar hard case in the BBC’s SHERLOCK, here essays a stunningly obnoxious villain, one dancing constantly on the edge of psychosis and violence. Yet, Phil gets away with all of his transgressions, including berating Rose at every turn thereafter, with nary a soul interfering. At one point, Phil conspicuously snubs an invitation to dine with the governor of the state (Keith Carradine), but then shows up to insult everyone, and even the old political hack just smiles while quietly beating a hasty retreat. Why does everyone coddle such a miscreant cowpoke?

Phil isn’t big or tall, and he supposedly stinks to high heaven because he doesn’t bathe, but he gets away with all of his antics over and over again and it becomes a problem for those on-screen, as well as those watching in the audience. The wimpy characters are hard to understand or admire, and Phil’s belligerence gets tiresome. Granted, the similarly wiry and hostile Daniel Plainview (Daniel Day-Lewis) got away with all of his malarky in THERE WILL BE BLOOD, but at least he was an oil baron whom the entire town relied upon for income. Here, Phil is given a complete pass by everyone even though he doesn’t hold nearly as much station. It feels false, given the protocol and manners of the time period. And narratively, it leaves the audience in the cold.

The plot does take some clever twists and turns, especially when Phil tries to teach Peter a thing or two about lassos and the cowboy way, but many of the surprises Campion takes a long time to get to will feel obvious to most within the first 15 minutes of the story. Indeed, what was shocking to readers in 1967 doesn’t play nearly as bold in the woke era of 2021, but Campion plays up each revelation as if it is. She also overplays her hand in other places, like her predilection for symbolism – scarves, handmade ropes, rabbits – it’s all a bit too showy. There are also strange and abrupt jumps in the timeframe and the actors are directed to overact some of the stiltedness of their excessively odd and repressed characters.

Granted, films don’t have to have lovable characters to be successful, but they should be more sympathetic than they are here. If George is so forgiving around his brother because he pities various truths he’s hiding, it would help to see some more of such insight into his brother. And what does George see in Rose other than she needs to be taken care of? Little romantic chemistry or even conversation is shown between the couple. All in all, such narrative issues render THE POWER OF THE DOG too inscrutable at times, leaving it far less affecting, or even as devastating as it should be. It’s a good, modern western, albeit one that feels more like art and less like the truly haunting tale it could have been. 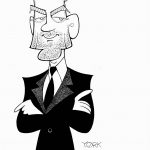 BRANAGH’S “BELFAST” IS A TRIUMPH OF ARTISTRY AND UNIVERSAL STORYTELLINGillustrated, news, Review 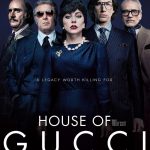 “HOUSE OF GUCCI” MISSES THE OPPORTUNITY TO BE A TAKE-NO-PRISONERS DARK COMEDYnews, non-illustrated, Review