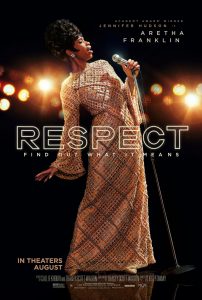 The biopic may be the surest Oscar bait for actors, but if the performer misses the mark, the entire enterprise sinks. The new film RESPECT, about the life of Aretha Franklin, showcases star Jennifer Hudson capturing many of the Queen of Soul’s vocal stylizations and looks, but the actress fails to dig deeper into the superstar to show us what really made the diva tick. Hudson isn’t helped by a faulty script, far too reverential in its gaze, as well as one that trots out so many musical biopic cliches that they almost make you cringe. And the film also fudges over a lot of facts that would have made the film far more interesting too. It’s a respectable effort, albeit a failure.

Franklin’s life certainly had its share of drama, but most of what is presented here has been shown elsewhere many times before and with far greater execution. The film shows Franklin suffering under the abuse of piggish men (WHAT’S LOVE GOT TO DO WITH IT, JUDY, COAL MINER’S DAUGHTER). It shows the artist’s struggles with conservative record companies (BOHEMIAN RHAPSODY, RAY). During the singer’s greatest successes, the demons of drugs and alcohol rear their ugly heads (WALK THE LINE, ROCKETMAN). These may have all been crucial parts of Franklin’s biography, but it feels stale after so many versions of such themes. What else ya’ got?

Why didn’t Tracey Scott Wilson and Callie Khouri, the screenwriters of RESPECT, zero in on a singular time period that would illuminate Franklin without having to cover so many decades? That’s what CAPOTE did, a superior biopic that starred Philip Seymour Hoffman as the troubled author in 2005. That script concentrated on his writing of the true crime novel In Cold Blood rather than attempting something more “cradle to grave” and illustrated how his desire for fame and fortune compromised his integrity. (Such choices plagued him all his professional life thereafter.)

Here, it would have been more interesting to focus on how Franklin came into her own as a black woman, singer, and a voice of Civil Rights in the 60s decade,  parallel in many ways to the rise of her friend Dr. Martin Luther King. Instead, the film covers that and a ton more, spending way too much time on less interesting material. The film even takes a good 30 minutes chronicling Aretha’s fraught childhood before Hudson is handed the reins as the adult character.

And while Hudson has been great before (DREAMGIRLS) and can sing the hell out of any song, she misses the mark by a wide margin here. There’s a blankness to her eyes throughout, never capturing the necessary attitude and fire to bring her subject to life. subject, Even at her most combative, Hudson seems to be ‘acting’ rather than being, getting outdone by better performances surrounding her from Forrest Whitaker, Mark Maron, and Audra McDonald.

Marlon Wayans gives a decent performance in the unlikable role of Ted White, Aretha’s abusive and controlling manager and husband. (Sorry, but there’s Laurence Fishburne’s Ike Turner and then there’s everybody else.) Titus Burgess, Kimberly Scott, and Tate Donovan shine in their brief supporting parts, as does Skye Dakota Turner as the young Aretha. The child actor captures more of the audience’s sympathy for the title character than Hudson can summon in her 90 minutes in the part.

The script also misses out on historical accuracy in crucial places as well. It almost completely fudges over the sins of Aretha’s father – the pious pastor  C.L. Franklin. Whitaker does wonders in the role, showing both the Christian and the devil in him, but the story makes little hay of all his well-known affairs with parishioners. Aretha’s mother Barbara (McDonald) left her husband due to his constant philandering and hypocrisy, but the film makes little of such facts. If anything, it seems to suggest that she was the problem in the marriage. In this era of #MeToo, that feels wholly tin-eared.

Instead, director Liesel Tommy turns more of his focus to the fun and easy parts of Franklin’s story, namely the music and the period. Both get lots of attention, yet Tommy misses the chance to add more weight and importance to songs like “(You Make Me Feel Like A) Natural Woman.” A lot of the soul of such material gets lost in the pageantry surrounding it.

It’s a problem from first frame to last, seeming content with getting the surface right, but not digging deep enough. Was the deceased Franklin too intimidating of a subject to tackle for the filmmakers here? Did they worry they’d insult her memory by showing more of her trying qualities? Or did they feel obligated to tell a long story because of her affect on the entertainment world for well over 50 years?

No matter, what shows up on the screen in RESPECT is often entertaining and very well-produced, but it’s too shallow. And that’s not an award-worthy look. 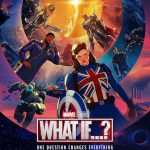 THE NEW TV SERIES “WHAT IF…?” GETS ANIMATED ABOUT ALTERING THE MCUnews, non-illustrated, Review 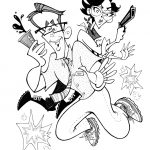