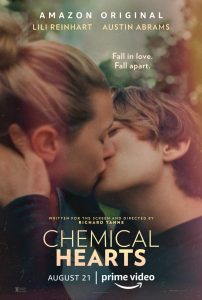 The new teenage romance CHEMICAL HEARTS is entirely earnest, wearing its heart on its sleeve from the very first second to the last. Unfortunately, sincerity can only carry a film so far. Despite wanting to be a solemn work about first love, this adaptation of Krystal Sutherland’s YA novel all too quickly trots out cliche after cliche while taking itself far too seriously. At times, the film almost feels like it’s veering into a parody of all those teen angst movies that bombarded cineplexes in the 90s with their edgy misunderstood heroines and the misty-eyed boys who pined for them.

The hero of this story is 17-year-old Henry Page (Austin Abrams). He’s a brainy, handsome kid but he walks around hunched and sullen. The new girl of his dreams is transfer student Grace Town (Lili Reinhart), equally angsty and glowering, dressing in boxy boy’s garb and limping with a cane. It’s love and first sight for these tortured teens when they meet cute, being assigned to edit the school newspaper together.

Little is cute after that. A hot and cold relationship starts with Grace pushing Henry away every time he starts to break down her walls. Even though they bond over sonnets and literature, Grace remains extremely moody, as well as a little too obsessed with teenage novels about death. (There’s a nice call-out to Judith Guest’s extraordinary 1976 novel Ordinary People, a story about a family dealing with the death of one son and the attempted suicide of another.) Henry spends an exorbitant amount of time trying to figure her out, hanging on her every word and movement, all the while itching to know the backstory about the accident that led to her multitude of pain.

Of course, a big third act revelation will illuminate all of Grace’s secrets, but too much of her backstory, arc, and personality feel utterly cliched, like so many of those other beleaguered heroines at the center of stories likes of THE FAULT IN OUR STARS, ME AND EARL AND THE DYING GIRL, PAPER TOWNS, and so on. And despite the fact that Grace dresses like she just discovered grunge, sooner or later, you know she’s going to clean up nicely and attend a party where the student body will be left oohing and ahhing. She’s all that? Surprise, surprise.

Just why filmmaker Richard Tanne embraces such cliches here in this adaptation is puzzling. The filmmaker showed only fresh and clever instincts in his telling of the Barack and Michelle Obama’s budding romance in the 2016 sleeper SOUTHSIDE WITH YOU. In CHEMICAL HEARTS, he blatantly trots out hoary trope after stale trope: a bestie goes off on the oblivious hero, parents just don’t understand, one lover runs after the other in the rain at full bore. They’re all here, but shouldn’t be.

The two stars try, but fail to generate much chemistry with each other. Abrams feels lethargic throughout, failing to generate much empathy for his lead. He was much more appealing with a fraction of screen time in HBO’s first season of EUPHORIA. (This film’s soundtrack tries mightily to recreate a lot of that landmark show’s sound too.) As for Reinhart, she tries nobly but struggles to make sense of her character. That’s understandable when you’re stuck with playing more of a symbol than a flesh-and-blood human being.

And why is CHEMICAL HEARTS shot throughout so utterly dank and dour? At times it resembles the gloomy-looking TWILIGHT films, or even much darker entries one can find in the horror genre. Is first love really that terrifying these days? Scary. 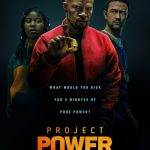 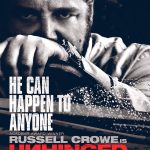 DESPITE A COMMITTED RUSSELL CROWE, “UNHINGED” IS A HECTORING SLOGnews, non-illustrated, Review