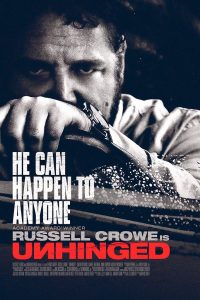 UNHINGED stars Russell Crowe, one of the most heralded actors of his generation. Its screenwriter is Carl Ellsworth, who wrote the accomplished thriller RED EYE in 2005. And the director is Derrick Borte, a pro who knows his way around actors and production. So why is their new film so disappointing? It’s a film that wants to be profound and edgy, a commentary about today’s raging populace, but it’s not smart enough or nearly as emotionally moving as it thinks it is. What could have been and should have been a clever, modern-day DUEL or FALLING DOWN quickly establishes itself as one of the most misbegotten films of the year.

The numerous mistakes start immediately. Crowe plays a character listed only as “The Man” in the credits, suggesting a one-dimensionality that is hardly encouraging. The man is sweating, bloated, and furious as he parks his pickup in the driveway before slaughtering his wife and her new lover inside his home. Then he burns down the house and tosses aside his wedding ring for good measure. Where can a character go from such a violent opening? Just kill more, it would seem. “The Man” essentially stops being a character before the film barely begins and turns quickly into a caricatured bogeyman like Michael Myers or Jason Voorhees.

After an altercation with a young mom named Rachel (Caren Pistorius) honking at him in traffic, this miscreant starts pursuing her to teach her a lesson in manners. Now, if the mother was a sympathetic figure, this all might make for a tense game of cat and mouse between the two parties. Instead, Rachel is a passive/aggressive type who eggs Crowe’s character on needlessly throughout the film, in addition to flubbing every opportunity to escape her plight and stop the carnage he’s instigating in his pursuit of her.

And why should we root for such a dunderheaded heroine as Rachel? Because she’s not as awful as “The Man”? No matter, she’s still a slow-thinking mother who continually puts her son Kyle (Gabriel Bateman) in danger throughout the story. Rachel’s sloth also ends up getting her lawyer killed while he waits for her in a city diner. She even lacks the simple judgment to drive into the parking lot of any local business, park the car, and simply bring an end to The Man’s pursuit. Granted, a thriller needs to find ways to keep the thrills and chills going, but this film never finds ways to do so that feel believable or fresh.

A smarter script wouldn’t have so lazily conjured traffic jams when the story needs them and miraculously clear the roads when a big car chase would liven things up. Clearer direction would have ensured the action sequences gave the audience a better sense of location, context, and through-lines without a plethora of quick cuts to cover continuity sins. And a better lead actress would have found a way to inject some wit into her character, rather than the colorless performance she’s content giving here.

The film trots out plenty of eye-rolling silliness too. When Crowe’s character is shot, he continues to drive just fine, as if a shoulder wound is no more inconvenient than wearing a safety belt. When authorities get involved in the proceedings, they act like oblivious fools who’ve never encountered a menace to society. And when given the opportunity to ensure the villain doesn’t get up to attack her again, Rachel refuses to finish the fight and make sure the bully stays down.

If all of this was played as over-the-top pulp in a crazy, Nicholas Cage kind of way, the film might have at least been a rollicking diversion. Thrillers with far-fetched premises like THE HITCHER and THE STEPFATHER have proven it can be done, but UNHINGED is too busy striving to be important. Scenes of news reports hectoring us about how society is out of control continually pop up throughout the 90-minute film rendering it more of an irritating lecture than worthy, popcorn entertainment.

This vehicle does none of its participants proud. Even the always reliable Jimmi Simpson fails to make sense of his lawyer’s character here. The film is a slog. And that’s about the worst thing a car chase movie should ever be. 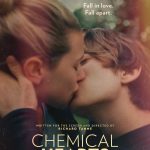 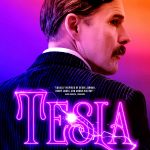