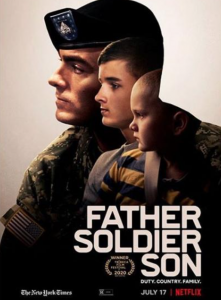 While watching the compelling new Netflix documentary FATHER SOLDIER SON, I couldn’t help but think about the bounties Putin is paying for Afghanistan rebels to assassinate American soldiers and the fact that our American president has yet to address such savagery. Our military men and women do not serve in vain and this doc by filmmakers Leslye Davis and Catrin Einhorn demonstrate their respect for such duty from the first second to last. (Perhaps the POTUS could check out this doc opening today and learn a thing or two about patriotism.)

Brian Eisch of Green Bay, WI felt a higher calling than just finding a job when he enlisted in the army shortly after high school graduation in 1999. He became a devoted soldier and was deployed to Afghanistan in 2010 as a master sergeant. The doc starts with him returning home to the States after six months overseas to reunite with his boys Isaac, 12, and Joey, 7. Their reunion is both joyous and strained. The family bond is tight, but in many ways, they’re virtually strangers.

A loving single father, divorced from a troubled woman the doc doesn’t illuminate or dwell upon, Brian expresses worries about missing out on his son’s formative years. Indeed, the boys’ uncle is taking care of them while dad’s away and key moments in their lives are happening without a paternal presence. Both boys love him nonetheless and are proud of his service, but it terrifies them too. Too many sleepless nights dwell on their fears for his safety.

The film clearly sympathizes with Brian and admires his service, but it doesn’t shy away from showing how his career takes a toll on everyone involved. That point is driven home all the more when Brian returns from Afghanistan crippled from an ambush while saving a local medic. That bravery earned him a Purple Heart, but it netted him little at home. Brian is relegated to a wheelchair and his rehabilitation is extremely arduous. His family struggles along with him as he battles to return to some sense of normalcy.

Ultimately, the maimed soldier agrees to have his left leg amputated below the knee to lessen the excruciating pain. The film charts the intricacies of working with prosthetics, squeamish as they may be, but his courage is never less than admirable. Brian learns to walk with an artificial limb, but it leads to depression, weight gain, and struggles to find a new vocation when he can no longer serve.

It’s difficult to watch this proud warrior taken down so many pegs over the 10 years that this doc filmed him and his family. (It might remind you of the movie BOYHOOD where Richard Linklater told his story about a family over a decade’s worth of filming too.) Yet even with such harrowing chapters in the story, there are wonderful moments of joy on display as well. Brian cultivates a loving relationship with a single mom named Maria he’s met and it makes for the loveliest moments in the story.

And while spending more time with his sons gives him joy, Brian’s machismo cannot help but put pressure on them, especially when he tries to encourage both of them towards military futures. His masculine pride gets in the way too when he has difficulty processing his son Joey’s tears after the boy’s loss at a school wrestling match.

There is an eerie sense of foreboding during the film, a feeling of continuous heartbreak awaiting this soldier. Brian’s marriage to Maria and the blending of their respective families are wonderful to witness, the highpoints of the film, but they are quickly usurped by the story’s biggest tragedy. Reality makes for crueler storytelling than any fiction that can be written, and the harrowing twist in Brian’s story will leave you in tears.

Yet despite such ups and downs, FATHER SOLDIER SON never loses sight of the courage in Brian’s growth as a man and father. The documentary doesn’t shy away from showing his faults, including the baked-in macho traditions that run through such families, but it sympathizes with them wholly. Serving country isn’t just a calling for some, it’s practically in their DNA, and while it may seem absurd to some, there is unmistakable nobility in it.

The music is minimal and there’s no outside narration framing everything to tell us exactly what to feel. Davis and Einhorn let their cameras do the work as fly-on-the-wall observers, letting the raw footage and economical editing stand on their own. The filmmakers also ensure that the nuanced moments have as much power as the bold ones too.

Ultimately, the film reaffirms one’s belief in the American spirit, if not the American military entirely. The specifics of politics involved in such skirmishes overseas don’t matter as much to the Eisch family as being drawn to something patriotic. However, Brian learns that being a father trumps his service as a soldier and his truest battle is that of the day-to-day variety at home. It’s a heartening lesson, one that isn’t lost on those of us watching who are now battling to make it through the COVID-19 pandemic, record unemployment, and a recession. We’re all soldiering on as best we can and this admirable film makes that abundantly clear. 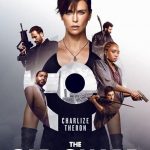 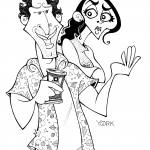