SELMA may be figuring in a lot of year-end lists, and it’s expected to be called when Oscar nominations are announced on January 15, but it didn’t open in Chicago theaters in 2014. Thus, it’s not on this 10 Best List. (INHERENT VICE and A MOST VIOLENT YEAR aren’t opening until January here either. What is it with tardy distribution in the Windy City?) But here are the superb films that did play here in 2014 and made this critic’s Top 10 list. 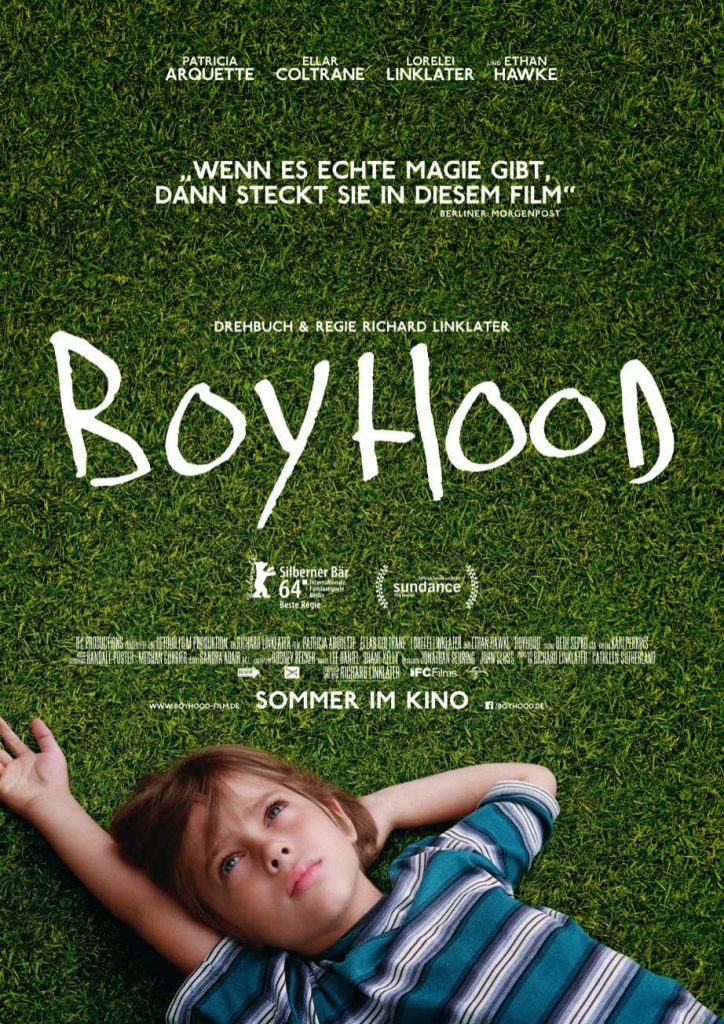 BOYHOOD
Once Richard Linklater’s masterpiece opened August 15 it became the frontrunner for Best Picture and it hasn’t waivered from many critic lists including this one. The 12-year span of a boy’s life, filmed with the same actor a bit each year from age 5 to 18, was a truly new way to shoot a film. More than being a groundbreaking technical achievement it was a truly unique examination of growing up in America and how everything affects a child’s journey, from divorce to moving to the counterculture. Ethan Hawke and Patricia Arquette did standout supporting work as the parents of Ellar Coltrane who coolly matured from sullen youth to introspective adult onscreen. We watched him go through his BOYHOOD and the experience was truly a once in a lifetime achievement. 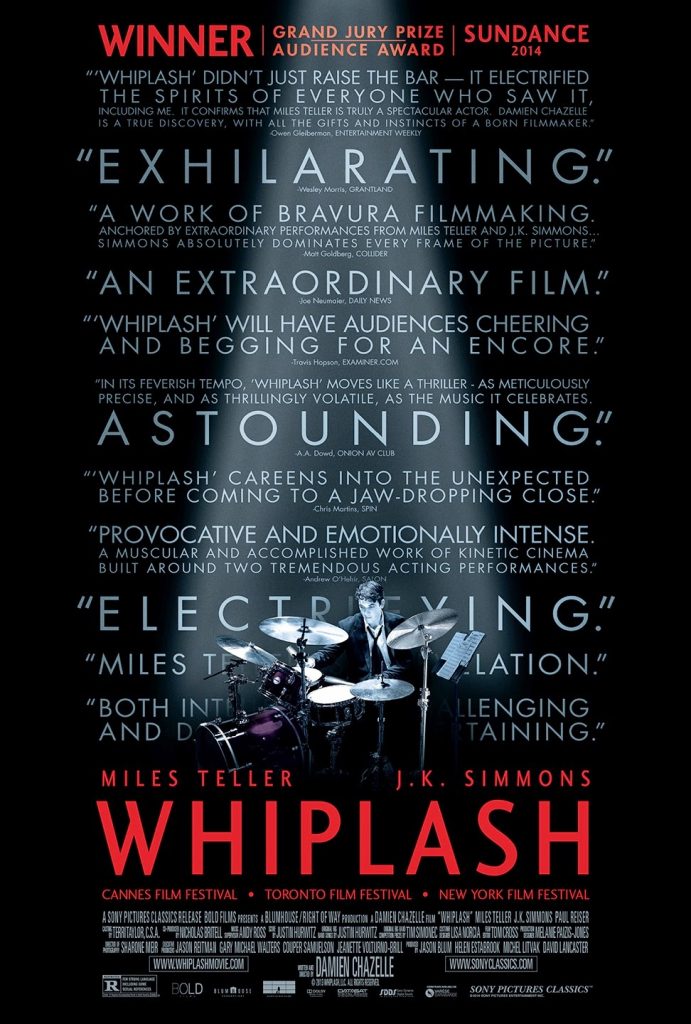 WHIPLASH
This gem was not only the year’s best character-driven two-hander, but it also managed to create more tension than most spy thrillers or action pictures as well. Miles Teller played the cocky drummer butting heads with his demanding jazz band teacher (J.K. Simmons) and their battles kept everyone in the Cineplex on the edge of their seats. Damien Chazelle wrote and directed this January Sundance sensation and it continues to shine through the awards season we’re in now. Expect Simmons to take the Best Supporting Actor Oscar in February, and deservedly so. 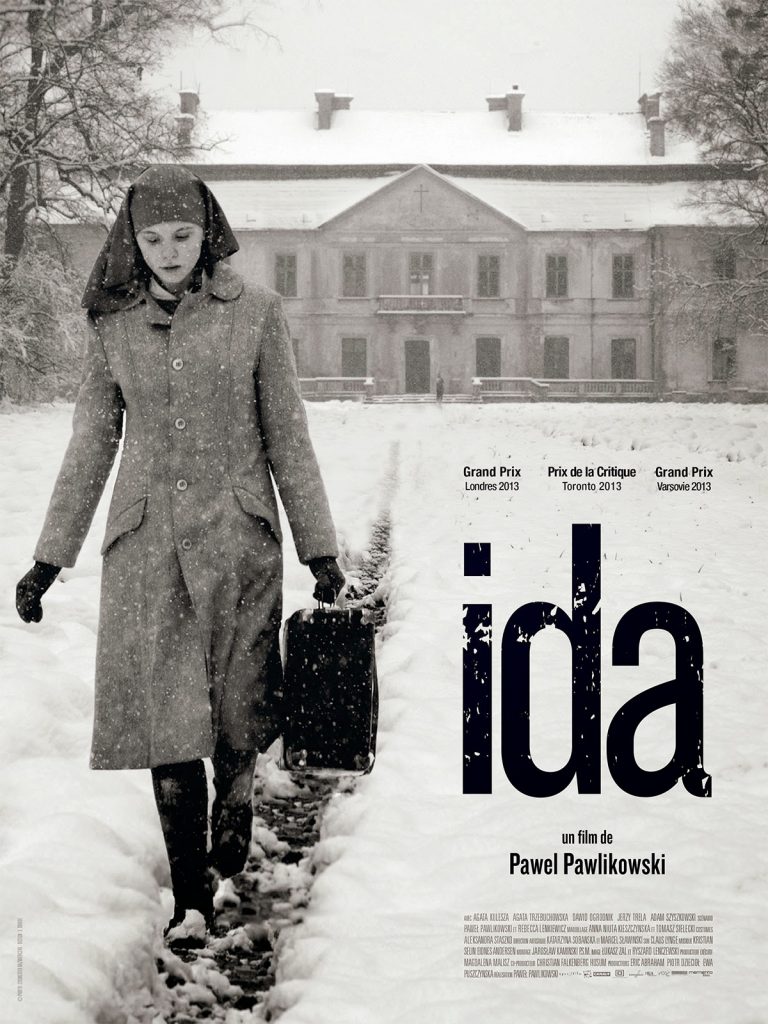 IDA
The best foreign language film of the year is this brilliant movie from Poland. Pawel Pawlikowski’s story is also a two-hander with a naïve soon-to-be nun (Agata Trzebuchowska) on a journey of self-discovery with her hardened aunt (Agata Kulesza) in 1960’s Poland. The revelations of identity and crimes are heartbreaking. And each shot of this black and white masterpiece is considered with the utmost care. It’s a haunting and poetic stunner. 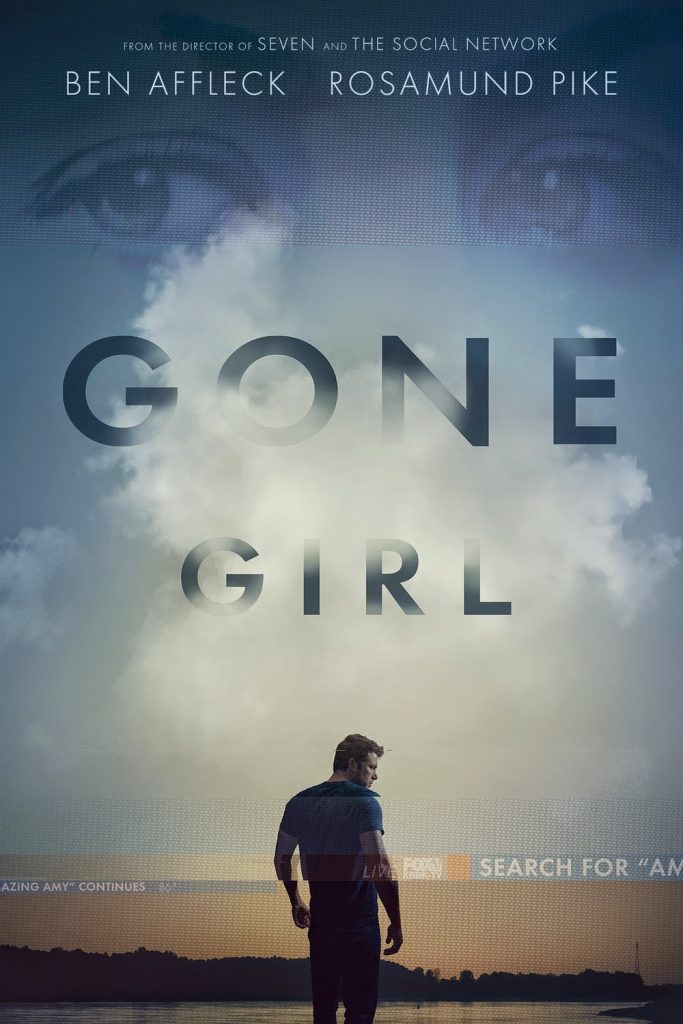 GONE GIRL
David Fincher remains one of the film world’s most consistent, accomplished and compelling artists. He also manages to inject pulp material like Gillian Flynn’s bestseller with social relevance and shrewd commentary on our modern world. Here he tells the twisty tale of a marriage gone wrong. And the couple played by Ben Affleck and Rosamund Pike are sometimes terrifying, often hilarious, and all too recognizable as spoiled Americans. Kudos to the brooding cinematography by Jeff Cronenweth and the tense score by Trent Reznor and Atticus Rose that make this moody film even more disturbing. 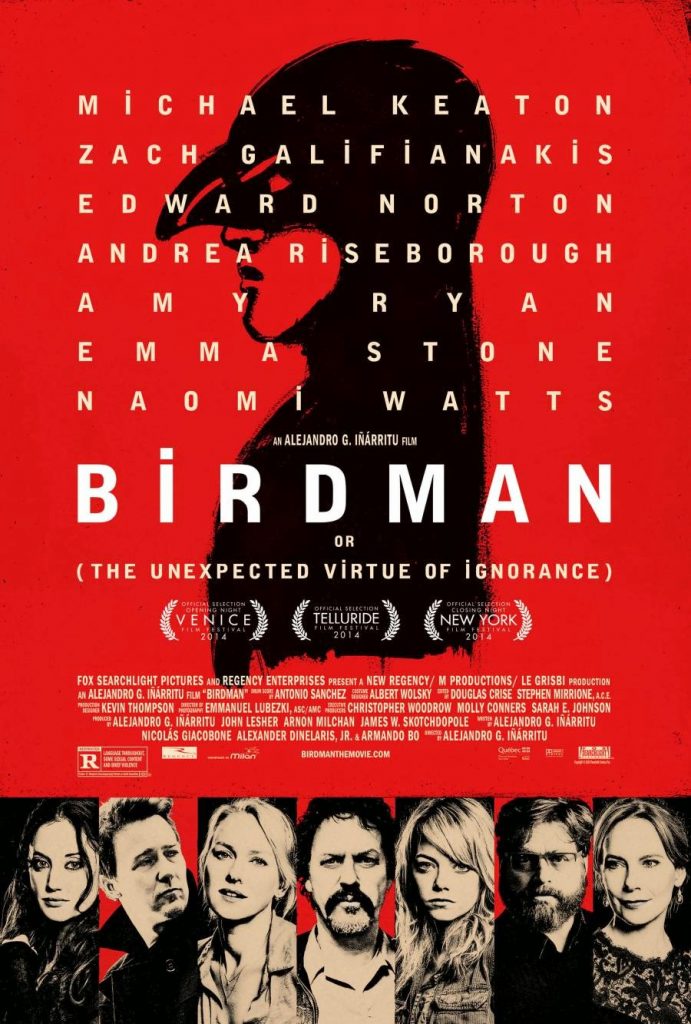 BIRDMAN
This dark comedy about an actor’s comeback attempt is both a searing indictment of the entertainment world and a hopeful piece on redemption. Michael Keaton made a great big comeback with his lead performance here, and he’s ably supported by a stellar troupe including Edward Norton, Emma Stone, Zach Galifianakis, Andrea Riseborough and Naomi Watts. Inventively directed by Alejandro Gonzalez Inarritu, expertly shot as if it’s all one long take by Emmanuel Lubaski, and scored with a single percolating jazz drum by Antonio Sanchez, this film pushes the medium dramatically even as it laughs at show biz all the way. 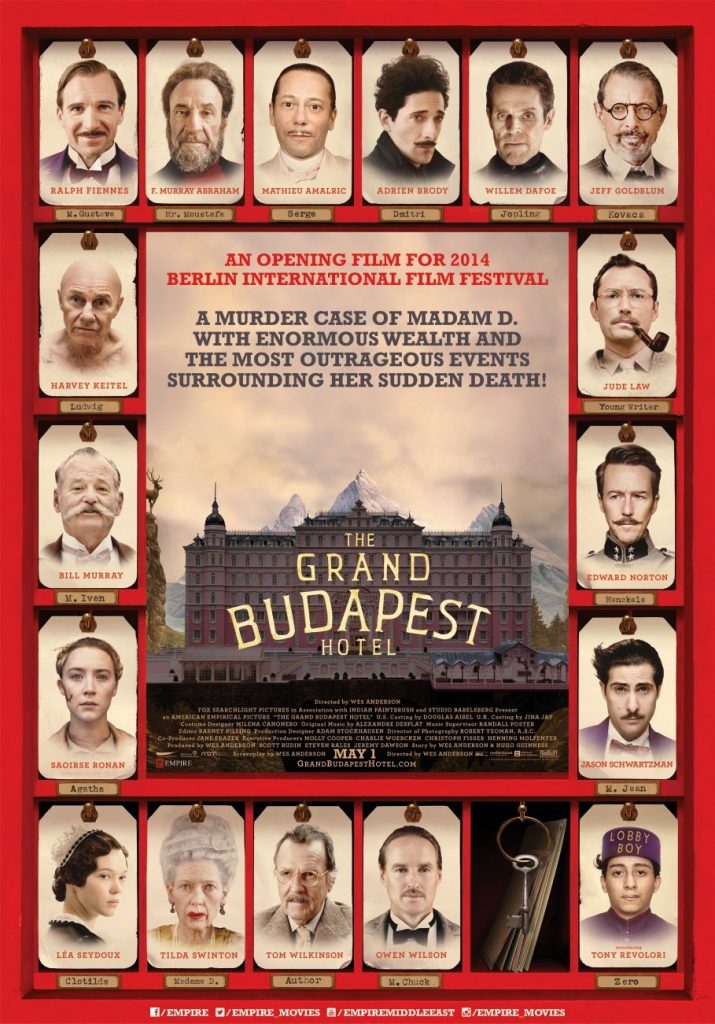 THE GRAND BUDAPEST HOTEL
Wes Anderson has always been a clever filmmaker with his stylized settings, camera POV and silly characters. They’re all here but there’s also a great sense of melancholy and hurt as a once grand hotel and its concierge struggle to maintain their dignity during a Fascist onslaught in Europe during the 1930’s. Ralph Fiennes is both hilarious and heartbreaking as the man clinging to grace and savoir faire but losing the battle in the gauche new world. Composer Alexandre Desplat wrote the best score of the year here and it may be his best work ever too. 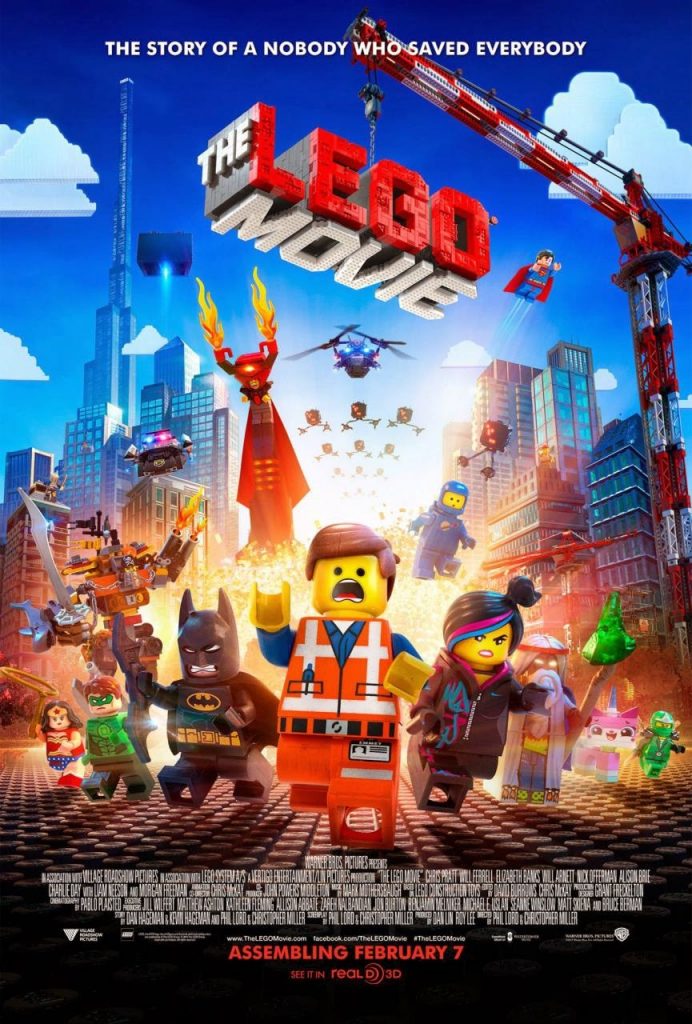 THE LEGO MOVIE
Of all the films released in 2014 who would’ve thought this one based on a toy line would be the year’s best animated feature and the LOL funniest too? An eye-popping and hellzapoppin comedy designed for kids and adults, this film satirized everything from superheroes to religion to commercialism in movies. And it did it while still remaining a ringing endorsement for the toy line. Umpteen sequels may diminish the returns but the success of this original work as art and commerce was wondrous. 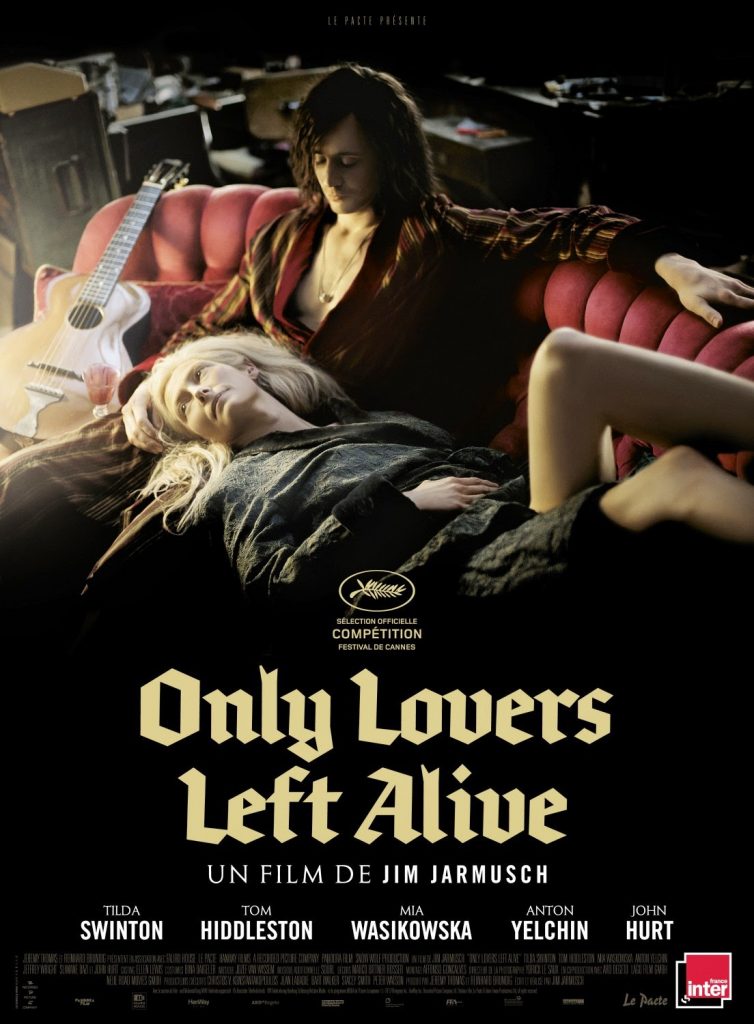 ONLY LOVERS LEFT ALIVE
The best horror movie of the year was also one of 2014’s finest love stories. Tilda Swinton and Tom Hiddleston played a vampire couple having lived far too many centuries and wondering if immortality is truly worth it. They’ve lost too many friends, and are out of synch with the modern times. Heck, even their hometown of Detroit appears deader than they are. Jim Jarmusch brings his unique and eccentric take to the genre and ended up fashioning a poignant and movingly eerie romance that the TWILIGHT series couldn’t begin to touch. 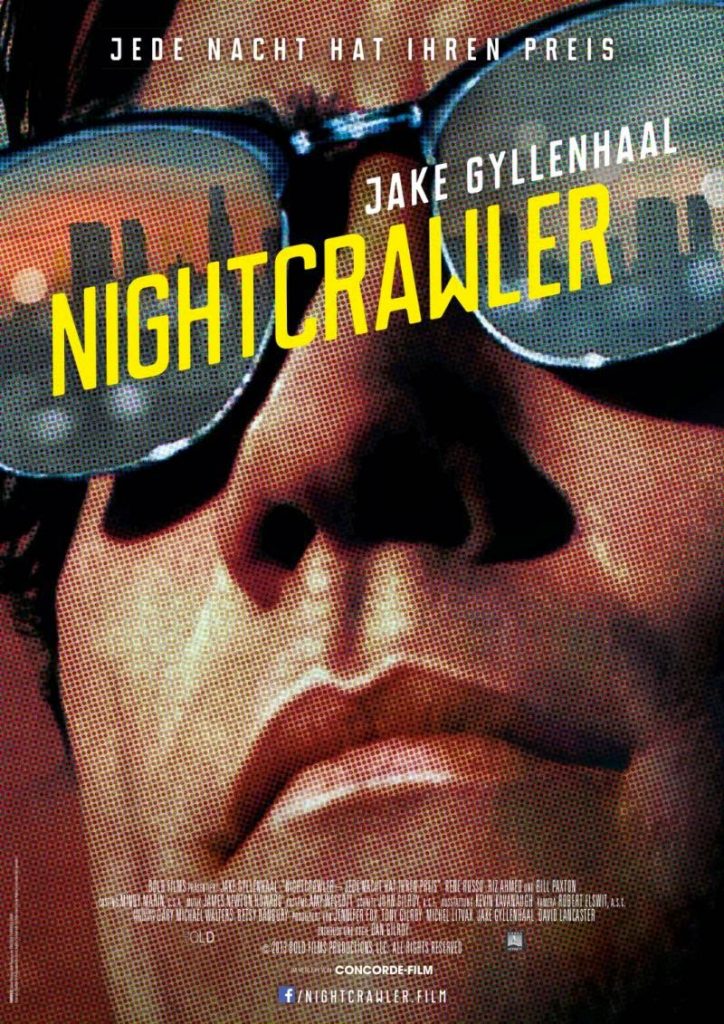 NIGHTCRAWLER
Speaking of horror, this psychological thriller about a driven tabloid TV cameraman willing to do anything to rise to the top of his profession was a scarier movie character than GODZILLA or any other ghoul or goblin on the big screen this year. Jake Gyllenhaal gave a career best performance as Leo Bloom who blooms in the mud here. Together with his performance in the little seen but sublime ENEMY Gyllenhaal is the actor of the year. This film, like NETWORK and BROADCAST NEWS, is a brilliant commentary on the state of TV news. And the portrait here is an ugly one. 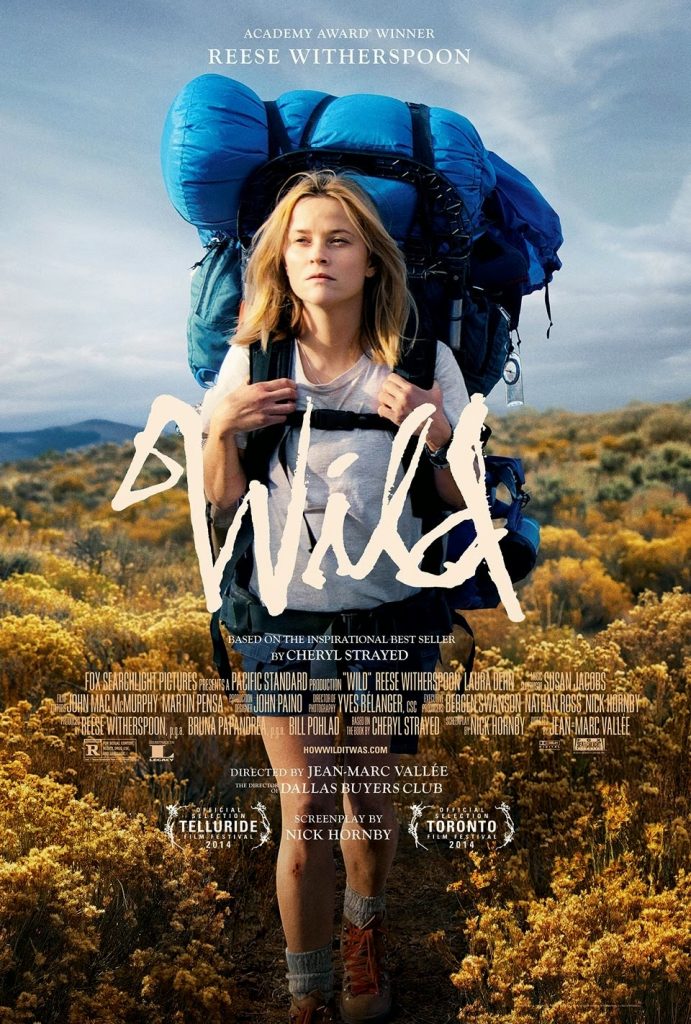 WILD
There aren’t enough films centered around women characters but this sharp and popular Reese Witherspoon vehicle should encourage studios and producers to make more of them. She plays a woman who’s lost her way after her mother’s death and her marriage ends, so she decides to clear her head and her slate by going on a hundred mile hike up the Pacific Crest. Along the way, she discovers what’s important, like everything from the right fitting boots to how to fend off the drooling wolves she attracts. (The human kind, that is.) Her journey is funny, harrowing, and utterly courageous, and the fact that it’s based on the true story of Cheryl Strayed gives it all the more resonance. Cheryl strayed indeed, but she found her way back. And her story made for one of the year’s treasures.

Other terrific films that deserve merit are the two British biopics sure to make Oscar’s top 10 list – THE IMITATION GAME and THE THEORY OF EVERYTHING. The aforementioned ENEMY should not have been unceremoniously dumped on VOD but given a wide release and given a chance in Chicago theaters. And superb frighteners OCULUS, “ANNABELLE, CHEAP THRILLS, LUCKY BASTARD and HONEYMOON advanced what the horror genre can do. They surprised and shook audiences without having to resort to excessive blood and gore.

Also worth mentioning is the underrated THE GOOD LIE, which deserved far more accolades and attention than it got, especially since it contained another wonderful great Witherspoon performance. The Spanish/American THE BOOK OF LIFE was an eye-popping animated delight for the family. And the best and smartest laughs of the year could be found in THE GUARDIANS OF  THE GALAXY, BEGIN AGAIN and TOP FIVE.

Documentaries like LIFE ITSELF and CITIZEN FOUR were two of the year’s best documentaries. SNOWPIERCER played well on the big screen and VOD, and gave the tired action/adventure genre a exciting new spin.  And Shailene Woodley gave two incredible performances this year in both THE FAULT IN OUR STARS as well as WHITE BIRD IN A BLIZZARD.

Those were the movie highlights of my year. What impressed you the most? 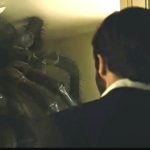 MY 10 FAVORITE IMAGES FROM FILMS OF 2014news, non-illustrated, Review 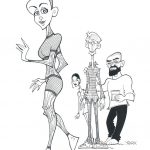 THE FIVE SLY WAYS “EX MACHINA” IS THE BEST FILM OF 2015 SO FARillustrated, Review