It’s time for two celebrations here at The Establishing Shot. The first is in regards to the blog’s anniversary. It’s about to start its fifth year online, come January, and I truly appreciate all of you who follow my musings on the film world. The Establishing Shot is read in 27 countries, miraculously, and I appreciate that as much as Seth Rogan appreciates Christmas Day VOD. After all, the world of film transcends mere countries, and I’m glad that in a small way the discussions here about them do too.

The other celebration here at The Establishing Shot is in regards to reflections on the past year in film. It’s a great time for remembering the best of 2014 and lauding them as awards season swirls around us. Thus, I’ll be posting my 10 Best List shortly, and today I’m listing my favorite images from the year’s movies. It’s been one of my favorite posts to do each year since the blog’s inception, and I hope it’s one you enjoy too.

What’s my criteria for a favorite image from a film? Well, it isn’t a scene or a line of dialogue necessarily but more intrinsically, an image that really struck me as special in the course of the story. And it’s usually one that’s very cinematic or even audacious. So here then, without any further ado, are those images that wowed me, gobsmacked me, and stayed with me throughout the year. (WARNING: There will be spoilers throughout this post, so if you haven’t seen some of these films yet, tread carefully.)

ENEMY
I’ve written extensively about this gem before here. This sublime psychological thriller directed by Denis Villeneuve barely got a release in NY and LA this past spring, and then was unceremoniously dumped on VOD. That’s where I discovered it, as it never opened in Chicago, but it was an incredible discovery even online. My favorite image from the film, and my favorite image from a movie this year, is the second to last one in this one. As Jake Gyllenhaal’s cheating husband decides to go back to his infidel ways, his wife overhears his plans. He opens up the door where she’s been eavesdropping from and discovers his terrified spouse. However, he doesn’t see her as a cowering woman. Instead, he visualizes her as a huge spider that constantly wants to keep him in her web. It’s a metaphor writ large, and a scene worthy of a horror movie, but the true monster here is the macho, hurtful man who just can’t appreciate the woman he has. 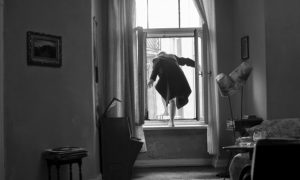 IDA
The year’s best foreign-language film directed by Polish filmmaker Pawel Pawlikowski is easily one of the year’s best too. And it yielded my second favorite image from a 2014 movie. IDA is the story of a young woman named Anna who’s about to take her vows as a nun in the 1960’s era Poland. She discovers she has an aunt named Wanda who reveals the girl’s true heritage. She’s actually Jewish and was named Ida, and her parents were killed during World War II. Together they travel to her folks’ burial ground and discover that not only were her parents murdered but so was her young brother. And he turns out to have been the secret child of Wanda’s. Wanda (an Oscar-worthy Agata Kulesza) has been established as a tough cookie versus the waifish Anna/Ida thorough out their journey together, but learning of the demise of her child turns out to be too much for her to bear. One day, while futzing around her high-rise apartment, she just casually walks out of an open window and falls to her death. Her suicide is bold and shocking, and it’s rendered all the more so because it’s done with no warning music or foreboding camera work. But then the whole movie is startling too as it expertly examines the issues of identity and the choices one makes in life with a bluntness and artistry seldom seen in modern cinema. 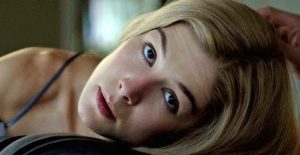 GONE GIRL
I love shots that bookend a movie. Usually, the same shot has a different meaning by the end of the film vs. the first time we saw it. That’s certainly true of GONE GIRL. The first time we see the enigmatic Amy respond to her husband Nick’s touch by turning towards him, we worry that she’s going to be his victim as he narrates, “When I think of my wife, I always think of her head. I picture cracking her lovely skull, unspooling her brain, trying to get answers.” But by the end of the movie, Nick (Ben Affleck) and the audience realize that his wife (Rosamund Pike) isn’t anyone’s victim. Quite the opposite as she is a ruthless monster. Director David Fincher ensures that the same shot that opened his film reads entirely different by the end. It’s now one resonating in horror. 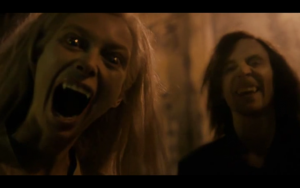 ONLY LOVERS LEFT ALIVE
Speaking of horror, the year’s best in that genre is a character-driven vampire tale about a longtime couple losing interest in living, even though they’re already existing as ‘the living dead’. The characters played by Tilda Swinton and Tom Hiddleston have survived too many centuries. They’ve lost friends as well as interest in the world around them. Even their home of Detroit is deader than they are. And by the end of the movie, they’re literally starving for a reason to go on as they’ve gone without blood for days. Yet, they find resolve in their love for each other and that drives them on. Thus, in writer/director Jim Jarmusch’s outrageously creepy final image, he presents them for the first time as the true ghouls they are. They bare their fangs as they prepare to live by ending the lives of two others.

WHIPLASH
What was scarier than any ghost, goblin or Godzilla onscreen this year? J.K. Simmons was, playing the sadistically demanding music teacher in WHIPLASH. He’s an obsessed perfectionist who requires the best from his jazz students and lords his demands over them with a stern fist. And it’s exceedingly clever how writer/director Damien Chazelle uses that character’s fist as it is not only the literal physical gesture to stop in the music world but it’s also a punch to his minion’s guts each time. It terrifies them, and it terrifies us in the Cineplex as well. 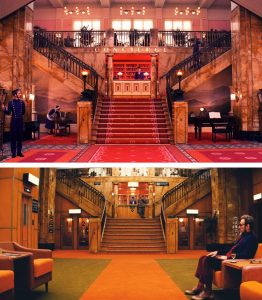 THE GRAND BUDAPEST HOTEL
Sometimes a movie’s setting can burn itself into your brain the way any character or story point can. Such is the case of THE GRAND BUDAPEST HOTEL. Its personification of the hotel, both in the ’30s and ’60s, is the movie year’s greatest achievement in production design. The hotel is itself as main a character in the film as any of its all-star cast. It was truly a sorrowful ‘character arc’ to see the hotel’s lush grandeur dilapidate into the gauche shell of its former self over the 30-year history presented in the story. Any fan of Wes Anderson’s knows that his visuals are always a crucial part of his work, and that’s never been truer than here. The images of the hotel stay with you from the first shot to last. And the hotel haunts you. 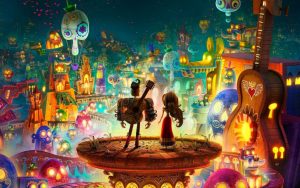 THE BOOK OF LIFE
Another film that is a triumph of production design is the animated THE BOOK OF LIFE. The story of a ghost trying to reclaim his love stems from Mexican folklore is as macabre as it is beautiful. In Spanish culture, death isn’t feared as much as embraced as another world to find family, friends, love, and beauty. And when Manola, the story’s hero, dies for his love of the unattainable Maria, he travels to the Land of the Remembered as a skeletal ghost. There he finds a non-stop carnival of spirits and quite spirited celebration. Filled with parades, parties, balloons and songs, the spectacle of the dead is sumptuous, eye-popping, and gorgeous. Director Jorge Gutierrez created one of the most imaginative family-friendly animated features this year and it’ll make you wish you could enter such a world. Ahem, just not as one of the deceased!

X-MEN: DAYS OF FUTURE PAST
One can quibble with this screen adaption of the beloved X-Men comic story because it puts Wolverine (Hugh Jackman) at the center of the story, which is really supposed to be that of Kitty Pride. Nonetheless, this sequel remained fun and involving even if it screwed with the equities. This film merged X-Men of old (Patrick Stewart and Ian McKellen) with those of the new (James McAvoy and Michael Fassbender) and in one of its cheekier set pieces, Quicksilver (Evan Peters) helps Wolverine and Professor X break Magneto out of prison. Prison guards stop them in the kitchen and start shooting at them, but before any bullets can hit their mark, the Marvel version of The Flash stops their trajectory with his lightning speed. Director Bryan Singer shoots the hilarious sequence in ultra-slow-motion to catch every detail, like Quicksilver sampling the kitchen’s wares as he runs circles around everybody. And it’s all put to Jim Croce’s tune “Time in a Bottle”. For me, this was truly the funniest and best action sequence in any superhero movie this year. (Ah, sorry about that, GUARDIANS OF THE GALAXY.) 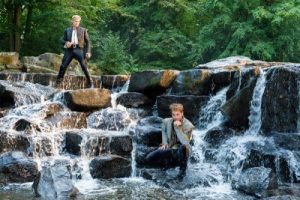 INTO THE WOODS
As a movie director, Rob Marshall is often unsure of how to frame or edit a musical number. (His frenetic cutting marred an otherwise terrific CHICAGO in 2002.) Some similar issues resurface in his latest too, the adaptation of Stephen Sondheim and James Lapine’s INTO THE WOODS, but thankfully his staging of the “Agony” number plays assuredly and is the best in the film. This song of comedic lament bellowed by two pompous princes is sublime as they splash their egos around as easily as the water under their feet in the babbling brook. They’re like too little boys throwing a fit at bath time and it turns their crocodile tears into hilarious waterworks.

BOYHOOD
My final favorite image of the year is from the best film of the year. The image that’s so stunning in Richard Linklater’s masterpiece BOYHOOD is the ever-changing face of lead Ellar Coltrane. Linklater shot his story of a boy’s development from age 5 to 18 with the same actor for 13 years, and it becomes more than a mere film. We’re truly watching the boy become a man on film and it adds weight to this venture in a way that most movies cannot fathom. And everything that happens to the boy becomes part of him. His image is formed by his mother’s divorce, troubled family life, moving from city to city, experiencing different friends, difficult friends, and love interests, and it all becomes a part of his personality and looks. Thus, this individual’s ordinary face becomes rather extraordinary in all that it tells in this wondrous film.

Those are the 10 favorite movie images of mine this year. What are yours? Let me know what made your eyes pop and your jaw drop! And if
you haven’t seen any of these films, do yourself a favor and seek out them out. They’re filled with exceptional images, indelible and unforgettable. 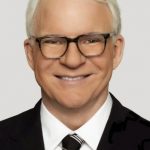 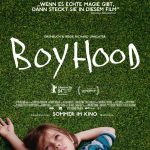