Time once again for my favorite images from the year in film. Here are the 10 that remained mostly in mine from the movies I saw in 2013. (WARNING: There may be some spoilers in here so tread carefully.)

My favorite movie of the year also contains the single most memorable image for me. It’s of Sandra Bullock, like the endangered astronaut, wriggling out of her confining uniform once she finally makes it safely inside her lunar capsule. She just faced death and destruction in the void of space and now she’s safe (for the time being) in the cramped quarters of her ship. She’s reborn, even circling in a fetal position, shedding her ‘skin’ and revealing the vulnerable human being underneath. In the film by Alfonso Cuaron that is the most stunning visual experience of the year, this one image was the most startling, symbolic and poetic.

After his ordeal with the Somali pirates, the brave Captain Phillips is taken below deck for a physical examination. We know that despite his bruises and fatigue, he’s in pretty good shape, considering. But then the shock of what has happened to him washes over Phillips and he starts shaking, sweating and stuttering. Director Paul Greengrass lets his camera linger on Hanks’ Phillips has he breaks down after all that’s happened. And Hanks’ crying is not only some of his finest acting onscreen ever. It’s a truly cathartic experience for us in the audience too as we were put through the wringer via this edgy, nail-biting thriller. 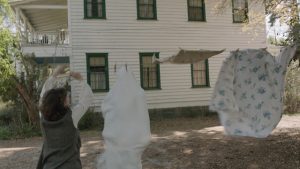 My favorite horror movie of the year is based on the real-life 70’s experiences of ghost hunters Ed and Lorraine Warren (Patrick Wilson and Vera Farmiga). In this story, they investigate the disturbing paranormal activity at a family’s farmhouse. Even when Lorraine goes out to help hang the laundry, the specters are not too far away. As a gust of wind grabs a sheet, it flies away but is stopped as it collides with the clear outline of a ghost’s body. It scares the sheet out of Lorraine. And the audience too. It’s one of the best jump-in-your-seat moments in director James Wan’s thrill ride. 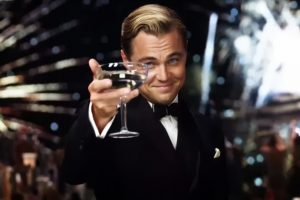 You’d expect a flamboyant director like Baz Luhrmann to create one show-stopping image after another in something like THE GREAT GATSBY. And he doesn’t disappoint. It’s a visual feast with superb production design, costumes, and cinematography. No image topped his introduction of Gatsby to Nick Carraway, as well as those of us in the audience. Gatsby, amidst fireworks bursting behind him, turns and toasts, welcoming all of us to his extravagant party.

The best image in this con artist comedy from director David O. Russell is his very first one. He introduces us to Irving Rosenfeld (Christian Bale), the main character, by showing us how utterly flawed a man he is, both physically and mentally. He’s a flim-flam man, a scoundrel, and we’ll soon find out that his entire life is a sham. Yet he takes such great care to give himself a youthful appearance by orchestrating the greatest and most elaborate comb-over in the history of cinema, that it’s both hilarious and heartbreaking. And it instantly bonds us to his side. 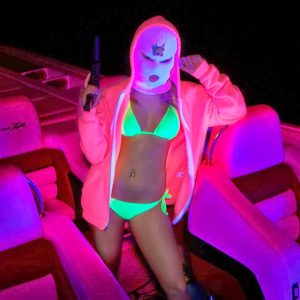 A couple of teenager girls run amuck down in Florida during spring break, falling in with Alien (James Franco), a wannabe rapper, pimp, and gangster. When Candy & Brit (Vanessa Hudgens and Ashley Benson) agree to assist him in a hit on a fellow dealer, they don ski masks and glow-in-the-dark bikinis for the mission. Sexy? Yes. Silly? Certainly. And not exactly frightening. But then they start shooting up his drug dealing rivals and suddenly they’re wolves in micro-mini clothing. It’s an audacious moment in Harmony Korine’s film that is like that the whole time. 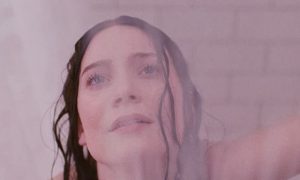 In Park Chan-wook’s moody thriller, India is a troubled teenager (Mia Wasikowska) that doesn’t know what to think of her visiting uncle. He’s insinuated himself into her home, her deceased father’s clothing, and even her mother’s bed. Then when India is almost raped by a vicious high schooler, her uncle saves her by breaking the boy’s neck. At home, washing the blood and dirt of the ordeal off of her body, India starts to cry. It seems she’s upset but that is not the case. What she is really doing is crying with pleasure as she masturbates to the memory of the kill. Murder gets her off. And suddenly the film’s true villain is revealed. It’s the best rug pull in a film this year.

THE WOLF OF WALL STREET

In this Martin Scorsese film about the over-the-top shenanigans of 80’s era investment brokers, the image of excess that sticks in my mind the most is when Jordan Belfort (Leonardo DiCaprio, making quite an impression again), high on Quaaludes, loses control of his body and flops around on the floor at a country club. He contorts like a fish fighting for oxygen on an unforgiving dry dock. And as Jordan literally crawls back towards his Ferrari to return home to convalesce, he is quite the pathetic sight to see. DiCaprio gives a stunning, physical performance in this scene and his work in this picture might be his best ever.

BLUE IS THE WARMEST COLOR

Adele Exarchopoulos gives the performance of the year in the BLUE IS THE WARMEST COLOR, Abdellatif Kechiche’s great French love story. She wears her raw, emotional intensity on her sleeve the entire movie. Her fears, her joy, her sexuality, her depression – they’re all totally exposed. She’s as naked emotionally as she often is physically, never more so than when she is dumped by her girlfriend for her betrayal of their relationship. As she walks home, utterly distraught, she cries and quivers with snot sputtering out of her runny nose. She’s one hot mess. And anyone who’s ever been dumped knows that Exarchopoulos has captured all the angst precisely. 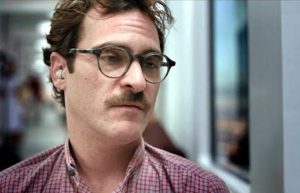 Like the poster, this film is all about Joaquin Phoenix’s face. It’s practically a one-man show as he is onscreen alone a majority of the time interacting with his computer operating system (brilliantly voiced by Scarlett Johansson BTW). Phoenix, therefore, must convey every feeling and emotion he’s experiencing during his interaction and burgeoning love affair with a computer and make us care. That’s no easy task, and it could have played as ludicrous. But the fact that Spike Jonze’s film is so emotionally moving and poignant speaks volumes about Phoenix’s talent. His face is the show and it’s incredible to me that he’s not considered a lock for a Best Actor Oscar nomination.

So, what images from this year’s movies are sticking in your head? Let me know what really made an impression on you and let’s keep the conversation going. 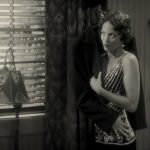 MY FAVORITE IMAGES FROM 2011 MOVIESnews, non-illustrated 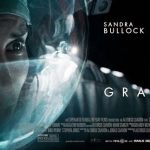 MY PICKS FOR THE BEST FILMS OF 2013news, non-illustrated, Review