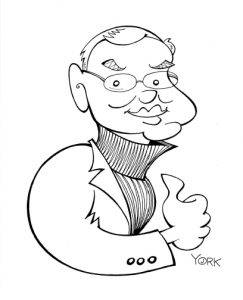 There are many film critics I’ve admired throughout the years. When I first read the reviews of Pauline Kael in junior high I marveled at her scathing takedowns of films that most people loved. (She dismissed STAR WARS as “exhausting.”) The New Republic’s Stanley Kaufmann liked to play contrarian to popular entertainments too. (Amazingly, he totally hated Brando’s strained voice affectation in THE GODFATHER role.) These two really opened my mind about what movies could be or should be, even if I didn’t always agree with their savaging. Today I enjoy reading online critics Emanuel Levy (www.emanuellevy.com), Sasha Stone (www.awardsdaily.com) and Kris Tapley (www.hitfix.com). They’re perceptive and witty bloggers and I get a daily fix from them. But to this day, no critic has had a larger impact on me than Roger Ebert. Nor have I found any critic who writes as passionately, intelligently or persuasively as he does. In my opinion, he’s not only the best film critic, but he’s also the most important one.

There are many reasons I love Roger. For starters, he has always approached films with equal parts of the head and heart. He has great affection for movies, yet doesn’t hesitate to criticize their shortcomings. And rarely is he ever destructive, even when a film is a total dud or a botch. He tries to find what’s right in a movie and focus on that. And if a movie is pumping on all cylinders, so is Roger. His enthusiasm is palpable. And it’s contagious too. He inspires me to want to see what’s he’s talking about.

I also like Roger because he so often shines the light on films that otherwise most of us would never have heard of. He’s championed little films that became big films because of his endorsement, like the heartbreaking documentary HOOP DREAMS (1994) or EVE’S BAYOU, that wonderful small period picture by Kasi Lemons in 1997 that he picked as the best of the year. A positive review from Roger means a lot. And he’s used it to defend the controversial like DRESSED TO KILL (1980) and THE LAST TEMPTATION OF CHRIST (1988) and laud the forgotten like DARK CITY (the sci-fi noir he picked as best film of 1998). He also is fair to all genres and doesn’t dismiss noir or horror because it’s pulp.

One of his most admirable characteristics as a critic is that he’s kept his integrity and his great reputation all these decades. He has never lost credibility by fawning all over a favorite the way Kael used to for Brian DePalma even when he was slumming, or Dave Kehr did lauding every one of Clint Eastwood movies that came out, even the hick comedies. Roger will pan a film if it’s bad, no matter who made it. He’s all about the movie, not hero worship. And he’s never become a caricature of himself like some critics have when they’ve stayed too long at the dance. (Rex Reed comes to mind. Reading him in the New York Observer is unfortunate these days as he has become such a bitter old man.)

I first discovered Roger in high school when SNEAK PREVIEWS ran on PBS’s Channel 10 in Milwaukee. He and Gene Siskel were Chicago newspaper critics who became huge nationwide TV celebrities because of their show. Everyone knows that they gave us the Roman coliseum way of reviewing movies with “Thumbs up” and “Thumbs down” and my personal favorite – “Thumbs way up!” But more importantly, they dug into their TV reviews the way critics did in film journals or classes. They’d really examine the details of a movie: its cinematography or musical score or editing or sound design. They weren’t about clever sound bites. They wanted to get deeper into a film. They’d very often devote entire programs to certain movies. I remember in 1978 they almost spent the entire show talking about SUPERMAN: THE MOVIE. It was a blockbuster, true, but they evaluated its craft and why it was an important big film too.

Both had a Midwestern sensibility too and that made them very accessible. They talked like two guys in college discussing a movie over a couple of beers. And boy, could they get into fights! They liked each other the way brothers do, which meant sometimes they’d squabble like they despised each other. I’ll never forget how Roger scolded Gene vehemently for dismissing Francis Coppola’s APOCALYPSE NOW (1979). If memory serves, Gene eventually came around to seeing it Roger’s way years later. Heck, Gene even picked HEARTS OF DARKNESS: A FILMMAKER’S APOCALYPSE, the documentary about making APOCALYPSE NOW, as his best film of 1991. Roger had that effect on people. He’d win you over with his brain and heart. And you didn’t really want to get into a fight with him. He was the one who was always more prepared, and defter in his arguments. Much more than Gene. And Roger usually won because of it. (I also think Gene had a big chip on his shoulder when it came to Roger as Rog was so much better in print too, and to this day, is still the only film critic to ever win a Pulitzer Prize.)

Despite being such a heralded critic and hugely successful celebrity, Roger’s life has not always been easy. Far from it. He battled alcoholism decades ago. He and Gene’s show moved through three versions and as many syndicates enduring some controversies with their parent companies because of it. And when Gene Siskel died of complications from a brain tumor in 1999, it hit Roger hard. Sure, he eventually found a new foil in the quick-witted and passionate Richard Roeper, but it wasn’t quite the same.

Then Roger’s health took a turn for the worse in the new millennium as he battled thyroid cancer and salivary gland complications, resulting in the removal of his jawbone. Some thought Roger, like his ‘frenemy’ Gene Siskel, might leave this world too prematurely. But while his ailments caused him to lose his ability to speak, Roger persevered and has not lost ‘his voice’ as he’s become even more prolific, reviewing most major movies that come out online (www.rogerebert.com) and in print each week. He writes tons of essays about great movies, trends, and does Q & A’s regularly in the Sunday Sun-Times. He continues to make public appearances and go to film festivals. (He even has his own called Ebertfest.) And he comments on Twitter like it’s going out of style! He even chimed in on the 2008 election with some brilliantly pithy editorials in the Sun-Times about Sarah Palin.

Roger talks about all the ups and downs in his life in the wonderful new memoir LIFE ITSELF. He candidly discusses everything from his relationship with Gene to his great marriage to attorney Chaz Hamell-Smith to the state of the film industry to the ravages of his diseases. He’s proven that tragedy doesn’t have to take everything one has. That kind of pluck and courage, considering all he’s been through, is simply amazing.

I’ll never forget the time that I sat behind him at 20th Century Fox’s advance screening of THERE’S SOMETHING ABOUT MARY back in 1998. (I was working on their advertising at the time.) He laughed as hard as any audience member there. His passion was again, contagious. He inspired me that night. He inspired me all through high school and college. And he is one of the reasons I now put down my own thoughts here about movies and the film business.

Roger Ebert. He’s one of a kind. And my favorite film critic. He’s also one of my favorite people on this planet. 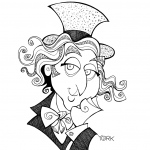 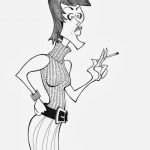 THE AFI IS FONDA JANE, AS WELL THEY SHOULD BEillustrated