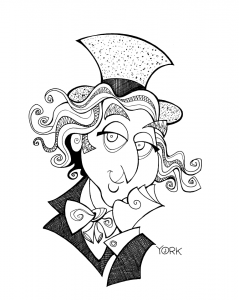 There are many great performances by sterling comedic male talents throughout the history of the movies. Names like Chaplin, Keaton, Arbuckle, Lloyd, and Marx readily come to mind, as do later 20th-century choices like Lewis, Matthau, Lemmon, Martin, Murphy, Murray, Carrey, Carell, or Depp. The list goes on and on and on. But for me, my all-time favorite male comedic turn was by the singular Gene Wilder in the title role in WILLY WONKA AND THE CHOCOLATE FACTORY (1971).

Funny, even Gene Wilder’s name suggests something riotous, doesn’t it? As if his very DNA spells out his madcap skills. Wilder’s onscreen persona was comedic mostly because it was so unpredictable. He could be as gentle as a lamb one moment and then turn on a dime into a raging lion. His rants were always a little crazy, even a little frightening, but never less than hilarious. And his was a style of acting perfectly suited for the role of that mercurial candy man who could take a sunrise, sprinkle it with dew, and cover it with chocolate and a miracle or two.

Gene Wilder gave many marvelous comedic performances in movies like THE PRODUCERS, START THE REVOLUTION WITHOUT ME, BLAZING SADDLES, YOUNG FRANKENSTEIN, SILVER STREAK, STIR CRAZY and THE WOMAN IN RED. Hell, he was even hilarious in his screen debut in BONNIE & CLYDE playing the undertaker taken hostage. But I think his role as Wonka is the most sparkling gem on that impressive comic resume.

Johnny Depp played the Wonka role in 2005’s CHARLIE AND THE CHOCOLATE FACTORY but had to resort to a prim wig, false teeth, and a lisping, faux voice to render his eccentric. It only confirmed his predecessor’s superior take on the character as Wilder needed no cosmetics to achieve unconventionality. He was unusual all on his own. And what a contradictory oddball he was as Wonka too, being both the stick and the carrot to his young charges touring his chocolate factory. He coddled them one moment. Then terrified them the next. And watching it all was as funny as hell.

Of course, the kids weren’t Wonka’s only foils in the film. Their parents were just as childish and Wonka enjoyed toying with them too. He immediately recognized that the bad apples didn’t fall far from their trees. Augustus Gloop obviously got his terrible eating habits from his rotund mother. Violet Beauregard was as uncouth as her car salesman father. Veruca Salt was spoiled just like her rich and entitled father. And so on. These ingrates had to be taught some stern lessons in propriety and self-discipline, and Wilder’s Wonka was just the man to do it.

Wilder got to do all sorts of wild and crazy things in the role, from eating a teacup after drinking its tea to expounding dementedly on the virtues of his creations. (“The snozberries taste like snozberries!”) He also gets to recite some of the most acerbic lines in film history. When Augustus falls into the chocolate river and starts to drown his mother frets, “He can’t swim!” to which Wonka dryly replies, “There’s no better time to learn.” Or when he tells them about his gum that chews like a three-course dinner one guest objects with the protest, “Bull.” Wonka calmly quips, “No. Roast beef.” Wilder had a lot to chew on but he wisely threw away most of his lines. Wonka’s withering sarcasm was enough on its own. The reading of the lines didn’t need any underlining.

Wilder was also smart to add the bit where Wonka greets everyone pretending to be a cripple. Wilder reasoned that Wonka would play such a practical joke to be unpredictable from the get-go. It worked wonderfully on his tourists and the movie-going audience. After that, we never knew what to expect from Wilder’s Wonka. And we were continually surprised and amused by all of his antics.

One of his most hilarious antics occurred during the boat tour scene. The ride quickly turned into a psychedelic head-trip with the vessel’s speed increasing and the factory walls projecting horrific images around everyone, like a chicken being beheaded! Here’s the video clip of that famous scene:

It’s all quite unsettling but hilarious nonetheless because Wonka is clearly f**king with his guests. He’s testing them, determined to find their true character in such a desperate situation. In doing so, Wonka reveals his true character as well. He’s not a wacko at all. He’s a strict moralist, a man of utter integrity looking for a child with similar resolve. Wilder pulls off that serious side of Wonka brilliantly. He also works wonders with the final emotional scene where he lovingly hands over his factory to the one worthy child – the poor yet noble Charlie Bucket.

Wilder as Wonka makes you cry from laughing and cry by pulling your heartstrings. It’s an incredibly nuanced performance. And it’s one I never tire of seeing. I’ve seen the movie dozens of times and I always find something new in Wilder’s witty work here. For all those reasons, it’s my favorite comedic turn in a movie. 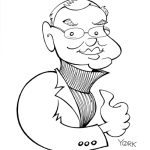