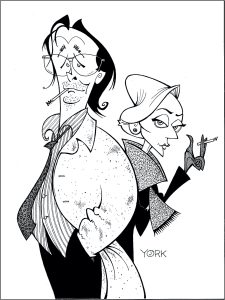 Too many movies and shows dropped this past December, leaving busy holiday-minded audiences little time to catch up with everything. One notable show that you might have missed just so happens to be one of the best series on the small screen. It’s a spy thriller entitled SLOW HORSES, now in its second season, starring Gary Oldman and Kristen Scott Thomas. Not only is it crackerjack espionage entertainment but it’s a great character study piece as well. Over a dozen actors get a lot to chew on in any given episode playing spooks who are flawed, funny, and often heroic. The Apple TV+ series is notable as well for its constant ability to zag where most others would merely zig. It’s compelling, tense drama – – expert at pulling rugs and raising heart rates.

The title SLOW HORSES refers to the nickname given to the MI5 spies who work at Slough House, an administrative purgatory for those who’ve bungled their time on the job and now need to perform ‘penance’ for their sins. The kinds of tasks these screw-ups must deal with now are barely of any ‘cloak and dagger’ variety. Instead, the poor S.O.B.s sit there, stewing in their own self-loathing, relegated to paper-pushing tasks and glorified busy work. As if such humiliation isn’t enough, they must also endure the acerbic insults of their disgruntled boss at Slough House, the equally disgraced, and often disgraceful, Jackson Lamb (Gary Oldman). Lamb would prefer they quit and leave him fewer charges to supervise, but as fate would have it, his losers often stumble into something legitimate that gives them a chance at proving themselves anew, as well as saving Queen and country.

Such a redemption angle is the only trope that feels rather obvious here, as most everything else in the program defies typical Hollywood storytelling, particularly the cliches found in spy thrillers. In SLOW HORSES, many main characters die, good deeds get eclipsed by the nasty politics at play, and everyone is a bitter pill. But that’s what makes it so different and so beguiling. These folks may be fraught, but it makes for lots of fun to watch.

And in Lamb, the small screen has one of its best antiheroes, a grumpy prick so unsavory, you can’t believe he’s the lead. Lamb is as cynical as he is slovenly, farting, spitting, and smoking his way through the day, not caring how he’s coming off to anyone, underling or superior. His boss is also a prickly sort. She’s Diana Taverner (Scott Thomas), a snide, dismissive, and calculating bureaucrat worried more about her own hide than any spy coming in from the cold. It all makes for a gloriously nasty show, often as hilarious as any comedy, but one that’s never afraid to show just how vicious the spy game is.

Take the first season where the show had the audacity to have its most likable character, one played by a young, beloved actress, get shot in the head in only the second episode. The poor gal spends the rest of the season withering away in a hospital bed. And whereas most shows would have her recover miraculously by the season finale, SLOW HORSES killed her off. Dashed away were any audience hopes for her, but ultimately such plotting showed genius. It not only lent the series a sense of devastating realism, but it upped the stakes involved in ways that most shows won’t dare allow.

SLOW HORSES boldly exclaims that this isn’t the spy world of noble heroics like those exhibited by the likes of James Bond or Jason Bourne. Instead, this is a new version of the cold war with few white hats, little glamour, and an ever-present sense of dread around every corner, even in a shitty office building like Slough House. Its occupants are flawed government peons, up against it, trying not to fuck up and get killed, and that’s what makes the show so palpable and watchable.

Some of season two’s most notable regulars, in addition to Lamb and Taverner, include River Cartwright (Jack Lowden), the young go-getter in the bunch; Catherine Standish (Saskia Reeves), the kindly office manager; Louisa Guy (Rosalind Eleazar), a no-nonsense type; and Roddy Ho (Christopher Chung), a self-important computer whiz. Jonathan Pryce plays River’s legendary spy of a father, yet he’s hardly a loving or supportive papa. Instead, he’s almost as prickly as Lamb, and seemingly, just as secretive as everyone else on the show. You never quite know whom to trust, but for certain, the entire cast is having a field day playing such secretive folk.

Oldman is loosy-goosy, doing some of his bawdiest work ever, his greasy hair flopping into his aviator glasses, shuffling about like an unmade bed. Scott Thomas has never been as brittle or as snide, and her eye rolls are a comical thing of beauty. It’s surprising how much humor is woven throughout storylines that involve a plethora of double-crosses, batches of sudden violence, and class warfare the way only the Brits can deliver.

The Emmys and Golden Globes have overlooked SLOW HORSES so far, but you should not. The show has been a commercial and critical hit overseas, with Apple TV+ ordering two more seasons after the success of its second season premiere. Its 12 episodes so far are waiting to delight you. You’ll laugh, you’ll gasp, and you’ll spend a good deal of the time on the edge of your seat. The word slow may be in its title, but take a look and this daring series will quickly become a fast favorite. 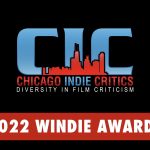 “EVERYTHING EVERYWHERE ALL AT ONCE” WINS BIG AT THE WINDIESnews, non-illustrated, Review