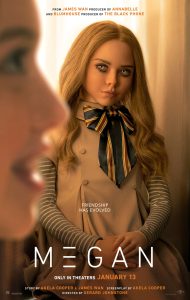 Horror comedies don’t come much more entertaining than M3GAN. What could have been just an anti-tech downer or dispiriting kill fest about an advanced A.I. doll taking her role as comforter/protector/plaything too seriously, is instead an endlessly amusing and exciting take on the robot gone awry sub-genre. Written cleverly by Akela Cooper and James Wan, and directed with gusto by Gerard Johnstone, M3GAN is the funniest big screen frightener in many a moon. And, for my money, it’s got the best new horror movie franchise-worthy villain in a couple of decades.

You know you’re in for a treat when the story starts with a toy commercial parody lamenting the fact that pets die and the solution is to buy a robot pet that never will. The satire is spot on – I should know as I used to be an ad agency creative director managing various toy accounts – and the film’s hilarious spoof indicates savvy filmmakers are at the helm.

It’s not only a clever opening, but it echoes the beginning of the 1972 cult classic WESTWORLD, another film about the dangers of robotics, albeit in an adult theme park. In that one, the stoic, staring gunslinger A.I. Yul Brynner was obsessed with gunning down human guest Richard Benjamin. Here, the M3GAN doll, short for Model 3 Generative Android, conveys a similar stoicism as she too goes off the grid and turns from toy to Terminator.

The charge she’s protecting is Cady (Violet McGraw), a depressed 11-year-old whose parents died in a wintry car accident. Orphan Cady gets sent off to live with her mom’s sister Gemma (Allison Williams), a career-obsessed toy inventor working for a high-tech company. The ambitious young woman doesn’t take to parenting and it’s not long before she’s appeasing her despondent niece with a virtual playmate, her state-of-the-art robot M3GAN. The interactive doll Gemma’s created is a cross between an American Girl and Teddy from the Steven Spielberg film A.I. M3GAN isn’t just a playmate, she’s a substitute mom doling out advice on manners, nutrition, and good housekeeping.

Soon, Cady is coming out of her shell, enjoying all the play and care from the increasingly domineering M3GAN, and it isn’t long before Gemma’s boss (Ronny Chieng) gets wind of the goings-on and smells a fortune in the making if they can mass merchandise the dolls for a high-priced clientele of lazy parents.

While Cady bonds exponentially with her toy, David pushes Gemma and her scientific team of Tess (Jen Van Epps) and Cole (Brian Jordan Alvarez) to introduce M3GAN to the general public in a matter of weeks. Gemma knows there are bugs in the doll’s programming, but she wants fame and fortune as well, so she ignores the troubling signs of M3GAN’s increasingly clingy behavior and righteous attitude concerning Cady’s care.

Predictably, M3GAN starts to eliminate any threats to Cady, including a nosy neighbor and her yappy dog, but the doll disposes of them so boldly and cleverly that you can’t help but laugh at her sins. M3GAN may be a monster, but she’s so damn good at it, you laugh and cheer her on. Her devotion to Cady even seems wholly admirable when Gemma shows herself to be woefully self-absorbed and clueless about so much happening around her.

The film satirizes our growing dependency on machines, undoubtedly, but more importantly, it wickedly riffs on bad parenting too. Gemma may be a scientist and the smartest person in the room, but at almost every turn, the young woman is a tragic naif, flummoxed by M3GAN’s growing acumen and the destructive capabilities in her programming.

The filmmakers make hay of all of it, and pay homage to other toy-themed movies including CHUCKY, AMERICAN SOLDIERS, and the “Living Doll” episode of THE TWILIGHT ZONE where stepdad Telly Savalas crossed “Talky Tina.” Johnstone is shrewd enough too to not overly rely on CGI here as well. The physical actions of M3GAN are mostly aped by young actress/dancer Amie Donald and it makes the doll seem more realistic that way. M3GAN’s vocals are provided by actress Jenna Davis with just the right mix of earnestness and sadism. And there must be an in-joke or two at play in M3GAN’s physical resemblance as she eerily recalls those frozen-faced Olsen twins that made such tabloid fodder decades ago. And why is M3GAN dressed like a 70’s flight attendant – – a riff perhaps on the doll’s devotion to serving her customer?

The story has lots of twists and turns, many quite unexpected for the horror genre. Various characters you assumed were toast end up making it to the final reel and most of the thrills of the final showdown make narrative sense. Sure, a few story threads go nowhere like the one concerning a traitorous employee working against the company, but most of what appears onscreen plays out as refreshingly fizzy fun.

All in all, M3GAN is a hoot and a holler from first moments to last, feeling like an instant classic. Shockingly, considering it’s only the first week of January, it’s the first great film of 2023. Bring on the sequels, I say, as I’m sure most of this doll’s audience will be quite game for them. 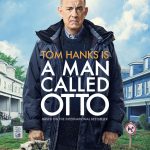 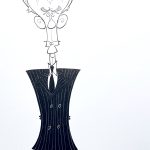