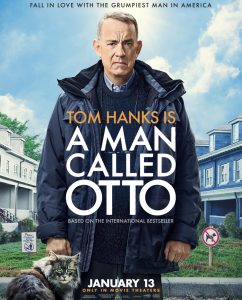 Sometimes, an American movie adaptation from a foreign film doesn’t convert particularly well. More than a language gap, it often has to do with a tonal chasm. I found that to be the issue with the American adaptation of the 2017 Swedish film EN MAN SOM HETER OVE (A Man Called Ove) now entitled A MAN CALLED OTTO for USA audiences. It’s an adaptation that means well and even hits most of the exact same story notes, but it feels off in its tone and even casting. It’s not a bad film, but the effort feels lost in translation.

The original movie, nominated for Best Foreign Language film at the Oscars a few years back, concerned a 60-year-old widower named Ove Lindahl (Rolf Lassgard) battling depression after the death of his wife from cancer months earlier. He’s prone to grump about, and even attempt suicide now and then, in his wintry Swedish townhouse neighborhood. Yet despite such dark material, it played as both a sentimental character study as well as a dark comedy. It also helped that the Swedes have a proclivity for cold weather and a coolness of character too, perhaps because of it. That dual chilliness helped keep the tone of both the 2008 horror film LAT DEN RATTE KOOMA IN (Let the Right One In) and the 2009 thriller MAN SOM HATAR KVINNOR (The Girl with the Dragon Tattoo) play subtly, and it helped OVE, despite its pathos, from ever become cloying.

But in America, there is a far lesser sense of cool calm and remoteness in how we live. Everything these days seems to be so out in the open, everyone so opinionated, so much dialed up to 11, that the nuances necessary for this story of a depressed man are lost in its Americanization. When Tom Hanks, playing the role now named Otto, is introduced, he looks far too fit, too young, and too well-appointed, not to mention he’s far too expressive. And when he glibly berates passersby and neighbors, it doesn’t feel out of the ordinary as it did when Ove broke Swedish protocol with his overt crankiness. Hanks has done sarcasm in so many of his roles too that it never feels like a suffering man’s projection. Instead, he seems like an adorable scamp.

And because Otto is played by Hanks, we know deep down he’s going to turn out to be a mensch. That compromises the character arc from grump to good guy. It’s no surprise when Hanks’ Otto, so spry and sprightly, connects with his new neighbors, headed by mouthy mom Marisol (Mariana Trevino). We know Otto will melt long before the script gets around to having him take on the babysitting chores of Marisol’s adorable kids or welcome a stray cat into his home.

Nonetheless, much of the material as presented here can still be quite affecting. Director Marc Forster, working with a frequently witty screenplay adaptation by David Magee, is skillful with his cast, and he knows how to cue laughs properly, as well as tears. But it all feels so predictable, and eventually, some of its obviousness starts to grate. Everything is a little too quaint, a little too pat; even the wintry landscape is missing a proper chill.

At the end of the day, Ove/Otto is a Scrooge story, a tale of an angry old man who’s converted by reconnecting to his community and owning up to his past. But the conversion doesn’t seem dramatic enough when Tom Hanks’ interpretation of ol’ Ebenezer is chock full of so much zest and twinkle right from the start. His Otto never makes for the convincing curmudgeon he needs to be. After all, it’s hard to thaw when you’re already giving off the warm fuzzies. 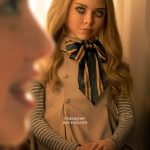 “M3GAN” IS A HOOT AND A HOLLER IN THE WORLD OF HORRORnews, non-illustrated, Review