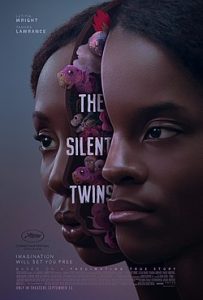 Twins often have an unbreakable bond, one that can seem odd and impenetrable to the outside world. Such was the case with the Gibbons twins, two daughters of Barbados immigrants living in London in the 1970s. June and Jennifer were so close that they only spoke to each other, often in a stylized manner of speaking, and barely communicated with their parents or anyone else who came into their orbit. This eccentric duo is the focus of THE SILENT TWINS, a disturbing new character study that borders on being a horror tale.

The film starts, however, with a whimsical cartoon of their girls’ drawings coming to life accompanied by dual narration from them. We’re inside the collective imaginations of June (Leah Mondesir-Simmonds) and Jennifer (Eva-Arianna Baxter) and it’s such a cheeky start that the two even reel off the cast names, including their own. Then, there is a knock on the door. It’s the girls’ mom (Nadine Marshall) announcing it’s time for dinner. As she opens the barrier, the girls clam up and face the wall in unison, refusing to move a muscle or even acknowledge her. It’s more creepy than rude as clearly these girls have little in the way of “people skills” and their eccentricity has thrown the house into a constant state of turmoil and frustration.

The girls barely touch their food while the rest of the family eats, and it’s the same at their school. They have no friends and make no effort to fit into the working-class elementary education norms. The fact that they were black children in an almost all-white school didn’t help their situation either, further driving them into their own heads for fear of abuse from classmates. Soon enough, the girls grow into lanky teens, with Letitia Wright taking over the role of June and Tamara Lawrance playing Jennifer. The maturation of June and Jennifer, however, only makes their lot in life more problematic.

Hormones get the best of them as they discover boys and it turns them into girls looking for a fight with the outside world, and often with each other. They set their sights on two American boys who smoke, swear, and act like they think they’re the second coming of Marlon Brando and James Dean. The girls lose their virginity and it drives their fantasy life into stories about romantic longing, teenage jealousy, and bodily functions. Such thoughts are shown through various fantasy sequences cataloging their inner lives and the contrast between such beauty and the doldrums of their reality couldn’t be starker. Director Agnieszka Smoczynska and screenwriter Andrea Seigel do a marvelous job of adapting Marjorie Wallace’s book into vivid chapters of the girls’ lives,  alternating between harrowing and fantastical.

The horrific parts of the girls’ lives dominate the second half of the film when their surliness and penchant for vandalism get them tossed into  Broadmoor Hospital. That’s the infamous institution known for treating high-risk patients with little sensitivity or evolved care. And yet, as often unsettling as all of this is to watch, the girls’ story is never less than wholly enthralling. June and Jennifer were clever, talented, and often adorable young women, understandably at odds with a world that rejected them first. The film slyly showcases much of the sexism, racism, and classism, they encountered. Is it any wonder they’d push that world away?

And in the four actresses playing the two roles, they have a SAG ensemble award-worthy group of young talent. Wright, Lawrance, Mondesir-Simmonds, and Baxter are never less than mesmerizing in their roles, showing the aching humanity just under the surface of these beleaguered children. As you watch them, you first feel like you’re observing them in a zoo, exotic creatures both scary and beautiful. By the end, you are in the cage with them, understanding their plight and aching with them.

THE SILENT TWINS never wholly explains the girls, nor could it. That’s what makes this such an involving biopic. Its mystery gives the piece both its sorrow and its power. 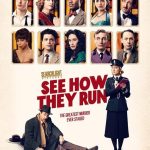 “SEE HOW THEY RUN” IS QUAINT BUT NOT MUCH OF A MYSTERYnews, non-illustrated, Review 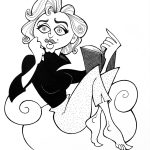