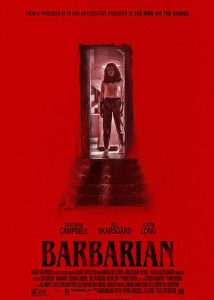 You know a horror movie is in trouble when the protagonist acts stupidly and puts themself in danger so egregiously that the audience starts to groan in disgust. Such a reaction occurred at least five times in the first 10 minutes of the new frightener BARBARIAN. It’s difficult for a movie audience to invest in such obliviousness. That’s why horror audiences started cheering for Jason Voorhees in all those FRIDAY THE 13TH sequels – his dingbat victims were too moronic to root for. Hard to empathize with sitting ducks.

And yet, that’s exactly what happens at the start of BARBARIAN as documentary researcher Tess (Georgina Campbell) drives up to a shady Airbnb in a god-awful section of Detroit, almost completely oblivious to all the red flags around her. For starters, she’s not going to make a very good researcher if she fails to notice how the neighborhood is wholly dilapidated and menacing, easily one of the scariest parts of town. Tess has come to Motor City for an interview with a film company, yet has not been put up at a decent spot for the night. (Who’d agree to that kind of interview?)

As if that’s not silly plotting enough, Tess soon discovers she can’t access the key code and the landlord isn’t picking up her distress calls. Then Tess discovers that the house already has an occupant. His name is Keith (Bill Skarsgard, the killer clown from IT) and he’s hardly the trustworthy sort. He’s hesitant in his answers, stares at her constantly, and tries to ply her with an open bottle of wine. Still, Tess stays.

Writer/director Zach Cregger continues to ask us to empathize with a character whose judgment is that of a 6th grader. Tess agrees to stay with a complete stranger in the house, yet everything around her continues to tell her to flee. She awakens in the middle of the night to find her locked door has been unlocked, and she also hears someone creaking about below the floorboards. Tess manages to get to her interview the next morning despite all that, yet she returns to the terrible place and discovers a hidden passageway in the basement. It leads to a dark hallway with a dingy room at the end of it containing a bloodstained bed and a video camera set up on a tripod. Yet, she lingers, curious as to what it’s all about. A few minutes later, she’s burrowing deeper into the bowels of the mysterious caverns below looking for Keith. Her behavior is infuriating.

From there, Cregger does manage to work in some legitimate shocks and worthy rug pulls, but he also wildly changes gears dramatically by introducing AJ (Justin Long), a narcissistic Hollywood star in a comedic storyline that almost feels like it’s from a different movie altogether. Eventually, his story dovetails with that of Tess when he ends up in Detroit in the same house. AJ is the actual owner, you see, in town to sell it, but it doesn’t take long for him to start investigating the same ominous caverns underneath the house. At least his character is supposed to be clueless.

Granted, watching any movie, especially one in the horror genre, requires a certain amount of suspended disbelief. But when the main characters like those here act so carelessly, oblivious to the dangers all around them, it’s hard to care for them. Then Gregger pulls out hoary cliches like chase scenes where characters trip or drop their weapon or fail to yell for help. And no one seems capable of properly communicating with one another about what’s going on.

In the second hour, the film starts to edge into looniness and it almost feels like Cregger decided halfway through filming to make a parody instead. Still, the filmmaker demonstrates some genuine skills at building dread and tension, and he delivers the gore too. But the sum of such parts does not make for overall success. I’m reminded of what the late, great Roger Ebert used to call the “dummy plot” which is at play here. All of the drama could be cleared up in a matter of minutes if the characters on screen simply communicated clearly with each other, particularly about issues that put everyone in danger. But Tess is too much of a naif, Keith too much of a mystery, and AJ too much of a doofus to truly invest in.

The better horror films showcase smart protagonists who face equally savvy threats. The character of Ripley in 1979’s ALIEN is just one example – she was a smart cookie battling a very shrewd monster. Cregger knows how to shoot, edit and score a film for tension. Now, he needs to work on placing characters in such stories who are clever enough to not insult our intelligence. 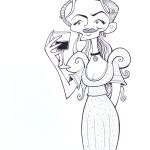 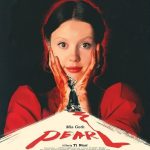