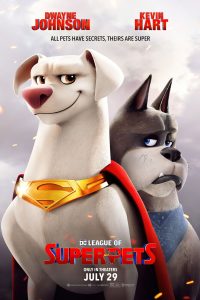 When it comes to translating DC Comics superheroes from the page to the screen, the true masters are those working in the Warner Bros animation department. (Sorry, Christopher Nolan.) Ever since they introduced BATMAN: THE ANIMATED SERIES in 1992, they’ve launched one sterling animated show or feature-length cartoon after another. And the cartoon winning streak continues with the DC LEAGUE OF SUPER-PETS. It’s the big cinema release opening this weekend from the Warner Animation Group and aimed at the kiddies for sure, but believe me, adults will get even more out of it.

The film’s anthropomorphic animal characters, gleaming computer animation, and colorful action will hold children’s attention for all of the film’s 106-minute running time. But if they watch it with their parents, or sit next to an adult in the theater, those kids will hear a cacophony of hearty guffaws at all the in-jokes throughout that will mostly go over their heads. It’s that funny, that knowing, that meta. Such rich jokes blend seamlessly with all the exciting superhero action, and even though the film’s adventurous parts are compelling, it’s the adult humor that makes this film such a winner.

The self-referential cleverness starts right off the bat on Krypton. Little Cal-El is placed into the space pod by his fretting parents as their planet starts to explode. His puppy dog Krypto (voiced by a droll Dwayne Johnson) joins him on the journey to Earth where they’ll both get a second chance. Accompanying the scene are a few bars from the Krypton theme by John Williams from his original score for 1978’s live-action film SUPERMAN THE MOVIE. It makes the scene dramatic, certainly, but it also announces that this cartoon adventure is going to serve up all sorts of references, riffs, and spoofs.

After arriving safely on Earth, the boy and dog are shown growing up together and ending up in Metropolis. Cal-El is now Superman/Clark Kent (voiced by John Krasinski), and Krypto is now Super Dog. The film scurries through a few of their adventures together, saving this and that, before settling into the main plot where Krypto feels secondary after Supes decides to propose to girlfriend Lois Lane (voiced by Olivia Wilde). The Man of Steel thinks his dog needs a new BFF to keep him happy, so he takes Krypto to the pet store to pick out a suitable pooch to fill the need.

There, Krypto encounters Ace (voiced by Kevin Hart), a boxer who’s been caged there a while after accidentally biting the arm of his family’s toddler when saving her from a tumble down the stairs. Ace’s owners thought he was a danger, so they packed the harmless puppy off to the store where he hopes to be adopted by a loving family every day. So do all the other pets we meet in the store, including Chip, a nervous red squirrel (Diego Luna), PB, a pot-bellied pig (Vanessa Bayer), Merton, a near-sighted turtle (Natasha Lyonne), and Lulu, a hairless guinea pig who’ll turn out to be the film’s main villain.

Voiced by Kate McKinnon, she used to live in the lab of Lex Luthor (Marc Maron), being experimented on as the evil billionaire tried to find ways to harvest Kryptonite to harm Superman. And while Ace feels intimidated by Superman’s dog upon meeting him and blanches at the potential adoption, Lulu sees it all as an opportunity to get back in good graces with her former pet owner Lex. Then, through a series of events revolving around some red Kryptonite that Lulu saved from the lab, she turns herself into a supervillain, and the rest of her pet store cronies too, as they all escape, now infused with superpowers.

On the outside, the critters are both delighted by their newly acquired powers, as well as humorously hindered by them. Soon enough, Lulu is working against Superman and Krypto and even kidnaps the other members of the Hall of Justice to exact her revenge. All of the core DC heroes are here, including Wonder Woman (Jameela Jamil), Aquaman (Jemaine Clement), The Flash (John Early), The Green Lantern (Dascha Polanco), Cyborg (Daveed Diggs) and Batman (Keanu Reeves). Batman is portrayed as a bitchy, self-absorbed malcontent, hissing every line, and it gives Reeves a chance to have a field day playing him.

All of the actors have a great time voicing their parts, clearly reveling in saying such clever dialogue written by Jared Stern and John Whittington. Stern and Whittington keep the jokes coming fast and furious, never letting the action-heavy plot become too serious. Stern also directs with great flair, acing the adventure part as well as all the comedy. This animated take is as rat-a-tat funny as THE LEGO MOVIE and showcases slapstick that would make all those Minions blush.

And in case you think that this may be a typical Johnson and Hart vehicle, think again. They’re both playing specific characters here outside of their normal comfort zone and they’re both really funny and even moving as pets struggling to be loved. That’s another thing that’s so great about this movie. It’s a stitch, a fun adventure, and beautifully produced, but it also will bring a well-earned tear to your eye as well.

DC LEAGUE OF SUPER-PETS both honors and expands the DC Comic universe. It makes fun of superhero tropes but does it with love. It might just behoove some of the suits at DC and WB to let the wizards in their animation department take a crack at some of their live-action properties. A story well told is a story well told, and this one is exceptionally clever, involving, and sharp from the first cel to last. 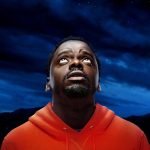 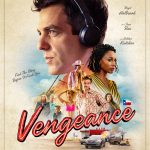