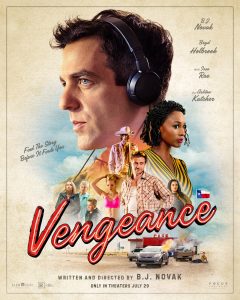 It’s hard to imagine just how the talented B.J. Novak pitched VENGEANCE to the money guys. The project he wrote and directed is a neo-noir thriller about a dead girl, but that’s where the simplicity ends. The rest of it is a complex mix of quirky character comedy, dry wit, searing political commentary, and more than enough criticism of both red and blue states to piss off both. The fact that its leading man is played by Novak as a rather shallow, judgmental, and even sexist Millennial probably made it all the more of a tough sell. Still, what ended up on screen works surprisingly well and manages to make for a wholly compelling mystery while also standing as a stinging stab at society.

The story starts with Ben Manalowitz (Novak) at a Soho party, talking smack about dating women with his equally shallow bro (an unbilled John Mayer). Their sexist dismissal of the opposite sex and discussion of brusque texting etiquette is as cringy as it is amusing. Novak is putting his character’s worst traits right out there for us to see as our introduction to Ben. Then he finds out that Abilene Shaw (Lio Tipton), one of his casual sex partners, has ended up dead in Texas, and the murder mystery and Ben’s conversion arc commence.

Ben, for all his assured blather, is an insecure fellow. He’s a staff writer for The New Yorker with ambitions and a podcast dream, but he has trouble communicating a lot of his thoughts and feelings with everyone, including Eloise (the ever-wonderful Issa Rae), his shrewd producer friend at NPR. He tells her about how Abilene’s brother Ty (Boyd Holbrook) called him thinking that he was her longtime boyfriend, and is convinced that his sister was murdered. Eloise sees the podcast’s potential right away and gives Ben the green light to pursue it. Ben is still hesitant about whether he wants to schlep to Texas, but he does, unable to resist the possibilities of what he might find.

And indeed, what he finds are experiences worthy of not only a whole podcast series, but life-changing events. Ty becomes his guide through the terrain, and Holbrook brings him to life in one of the best supporting turns this year. Ty is hugely emotional, a bit childish, and seemingly always on the verge of violence. Meanwhile, Abilene and Ty’s family is equally fascinating, mourning their daughter while welcoming Ben into the fold.  J. Smith Cameron, one of our best character actresses, does exceptional work here playing a tough but compassionate mom. She challenges some of Ben’s wrongheaded assumptions about the locals, and soon he realizes he’s got a lot to learn about Texas, not to mention Abilene’s shady backstory.

Novak plays a lot of Ben’s education for laughs such as when he’s schooled about college football during a local game. Overall, he comes to see that the South is much more than the rubes he was expecting. And they in kind see him as more than just a latte liberal from the North. Ben also meets plenty of unsavory types too, like Ashton Kutcher’s insinuatingly nasty record producer Quentin Sellers, making for a vivid mix of Texas as a fun place to live, and a wild west show to fear. Sometimes the film plays like a Cormac McCarthy story done with quippy Woody Allen-esque banter, but wisely, by the last act, Novak eschews most of the comedy to let Ben concentrate on solving the mystery. And what he discovers will not disappoint.

To tell any more would ruin all the clever surprises, but suffice it to say, Novak’s debut film is a sharp one. He manages to honor a lot of tropes of both comedy and mysteries while pulling a lot of unseen rugs too. He holds the screen well too with his low-key, Buster Keaton-esque persona, all the while riveting us with his shrewd take on identity, sin, and forgiveness. If only the rest of America could find common ground between the red and the blue as satisfactorily. 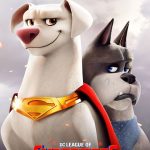 LOOK, UP IN THE SKY…IT’S A POOCH! IT’S A HOOT! IT’S SUPER-PETS!news, non-illustrated, Review 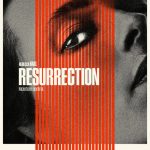