Stan Lee, Jack Kirby, Steve Ditko, and a host of other writers and artists who made Marvel Comics what it is today owe a debt of gratitude to Robert Louis Stevenson.

The famed 19th-century author of The Strange Case of Dr. Jekyll and Mr. Hyde obviously inspired all those superheroes with dual personas created by Lee, et al. at Marvel Comics. Now, one of their most literal interpretations comes to Disney + streaming in a six-episode series entitled MOON KNIGHT. It’s based on the 1975 comic book by Doug Moench and Don Perlin about a former soldier with multiple personalities who fights evil forces both real and supernatural. He’s a dark and complicated character and so is the series. A little too much so.

There’s a lot of the same sort of VENOM dynamic going on in the troubled soul that is Steven Grant (Oscar Isaac). He appears to be a regular bloke who just happens to have a violent side that seems to take over at times. Steven doesn’t realize it’s due to his dissociative identity disorder, and thus, he blithely goes on with his life assuming he’s merely a working-class Brit toiling at a museum in London. However, whenever Steven feels stressed, he blacks out and wakes up in strange places, unaware of how he got there and sometimes leaving a violent wake behind him. Additionally, Steven starts hearing voices and seeing visions nagging him to embrace the real him.

One of his visions is that of a doppelganger, the merciless ex-mercenary named Marc Spector that Steven was in a former life. Marc is the genuine personality and he wants control of his body back. As if that’s not enough to rattle Steven, a supernatural vision keeps pestering him in the form of an ancient Egyptian god named Khonshu (voiced by F. Murray Abraham). The skeletal specter wants him to prevent an ancient amulet from falling into the hands of a mystic named Arthur Harrow (Ethan Hawke).

Harrow’s men start chasing Steven all over London, convinced he possesses the amulet, and soon enough more blood gets spilled and bodies pile up. It’s dark and violent, though watching Steven panic at the mayhem provides a humorous counter to such brutality. And when he’s cornered, about to become a casualty himself, Marc takes over. Ultimately, Steven ends up in the Middle East again where he learns to fully embrace his Marc side, as well as the mystic powers he’s inherited, including an all-white superhero cape and cowl that makes him look like a cross between a mummy and The Phantasm from the 1993 animated Batman movie.

The episodes available for screening were chock full of breathless action, sharp special effects, and the A+ production values you’d expect from Marvel and Disney. Isaac gives it his all, playing multiple characters, doing various accents, and bounding about all over the place like a human pinball. (He hasn’t done this much huffing and puffing since he hot-footed it all over the third act of A MOST VIOLENT YEAR.) Hawke makes for an insinuating and sinister villain, and May Calamawy makes a strong impression as Steven/Mark’s spunky love interest Layla.

If showrunner Jeremy Slater is at fault for anything it may be staying too loyal to the very complicated source material. This show is dense and complex, with enough twists, psychological ruminations, and mythology to cram one’s head almost as full as that of Steven/Marc. The show has some tonal problems too, mixing the dark violence of VENOM with the cheeky humor of SPIDER-MAN. And some of it feels excessively silly like when Khonshu starts cracking wise as if he’s Steven/Marc’s sidekick in a buddy comedy.

As the show continues, it needs to slow down and catch its breath once in a while. It also needs to dial back all the mystic mumbo-jumbo. Watching the discombobulated Steven/Mark fight for control of their body is a lot of fun, but having them constantly stop to explain the knotty plot to one another is asking for the moon. MY PREDICTIONS FOR THE 2022 OSCARSnews, non-illustrated, Review 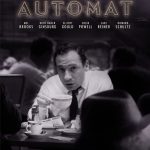 “THE AUTOMAT” WARMS THE SOUL LIKE A GREAT CUP OF JOEnews, non-illustrated, Review