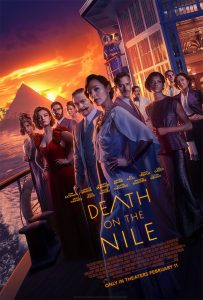 The feats of filmmaker Kenneth Branagh have often risen to the sublime, delivering superb takes on a variety of material. His directorial debut with HENRY V in 1989 was one of the best Shakespearean adaptations ever. He treated the MCU’s comic book THOR seriously in 2011 to great effect and did the same with Disney’s live-action adaptation of their cartoon CINDERELLA in 2015. And just this last year, his autobiographical BELFAST resisted being a schmaltzy period piece to become one of 2021’s most mature, intimate films.

Still, Branagh’s remake of cat-and-mouse thriller SLEUTH in 2007 was a labored slog, and there were too many histrionics in his take on Agatha Christie’s famed mystery MURDER ON THE ORIENT EXPRESS in 2017. Now, he’s back with his version of Christie’s DEATH ON THE NILE, both directing and starring again as her intrepid Belgian detective Hercule Poirot. This outing is slyer and more focused, but it still lacks the fun that Christie brought to her mysteries on the page. It’s a problem with all the remakes of Christie of late, and Branagh’s interpretations in particular.

In 2014, the Christie estate decided to release all the late author’s works for a new generation of filmmakers and the new interpretations that were produced stressed the grimmer aspects of her murder mysteries. BBC One’s re-do of AND THEN THERE WERE NONE in 2015 showed no sympathy for its ten strangers invited to a remote island, knocking them off one by one with an air of viciousness to each avenging. The raves for that production buoyed other filmmakers to go dark in their takes on Dame Agatha’s work too, including Branagh, but Christie’s Poirot was never written so bleakly or harshly.

Granted, murder is hardly a light topic, but any mystery that contains an entire train’s or boat’s worth of suspects is not exactly aching with gravitas. And indeed, DEATH ON THE NILE is such a story with its elite murder victim and ten possible suspects all aboard a luxury liner heading down the Nile. It’s a whodunnit, for heaven’s sake, an invite to the audience to match wits with Poirot and see who fingers the culprit first. Granted, Branagh’s interpretation of the material keeps things shiny and bright looking, particularly with pristine production design, but he and screenwriter Michael Green miss too many opportunities to make this mystery a truly fun excursion.

The problem starts with a wholly unnecessary flashback to Poirot in his early adult years fighting as a soldier in WWI. He saves his Belgian regiment with some shrewd thinking – foreshadowing such instincts needed as a detective – but then an unexpected explosion kills his commanding officer and maims Poirot. The heavy scarring on his face explains the elaborate mustache that Branagh wore in MURDER ON THE ORIENT EXPRESS and here as well. It’s provocative, sure, but it’s not there in Christie’s prose and it plays as far too heavy an idea for this type of film. And two films in, Branagh shouldn’t have to be explaining Poirot to his audience.

From there, the story gets on the right track with all the characters coming together in 1937 Egypt for a wedding between Simon Doyle (Armie Hammer) and heiress Linnet Ridgeway (Gal Gadot) after their whirlwind romance. It’s a controversial coupling too as she stole her man right from under the nose of her bestie Jacqueline de Bellefort (Emma Mackey). Is it possible that the fickle Simon may have been swayed by Linnet’s riches? That certainly seems to be in the motives of many of those in attendance as well.

As everyone joins the couple for a honeymoon cruise, each of the characters aboard is given a reason to want to off Linnet, and soon enough, a murder takes place. Of course, Poirot happens to be on board as well to help sniff out what happened amongst the elite. That list includes a host of suspicious characters played gamely by Annette Bening, Russell Brand, Jennifer Saunders, Dawn French, Sophie Okonedo, Ali Fazal, Rose Leslie, and Letitia Wright. Tom Bateman returns as Bouc, Poirot’s friend from the train, and his part is significantly rewritten to wedge him into this outing.

Branagh directs all of the cast well, and by and large, each suspect gets their moment to shine during Poirot’s interrogations. Branagh is nothing if not an actor’s director as is often the case with thespians who make such a transition. And he himself seems more assured in the role this time, but he’s not nearly as fun a presence as Albert Finney was as Poirot in the 1974 version of MURDER ON THE ORIENT EXPRESS or the subsequent sequels starring Peter Ustinov in the role. (Arguably, David Suchet, from the British TV series AGATHA CHRISTIE’S POIROT captured the sleuth best. He was the perfect combination of a charmer and an oddball.)

The director also misses opportunities to utilize his tony cast better. Brand is a crackerjack comedian but his role here is utterly straight. French and Saunders are comedy legends in England, but you wouldn’t know it by the shocking lack of banter between them in this venture. In the 1978 version, their roles were played by Bette Davis and Maggie Smith, and screenwriter Anthony Shaffer knew how to give them dialogue that crackled with wit. The roles written for French and Saunders by Green here are far too dry and dull. Why would Branagh cast them if he wasn’t going to play up their comedic talents? That’s almost a mystery unto itself.

In fact, compared to the ‘78 version, this one pales in almost every comparison. John Guillermin’s direction of the previous version was rollicking and crisply paced from the first frame to last. This one takes a full half-hour to really get going. Anthony Powell’s Oscar-winning costumes were gorgeous too in that earlier version and much more suited for the desert heat than Paco Delgado’s heavy clothing choices are here. Composer Nino Rota contributed one of his best scores to the original film as well, but Patrick Doyle’s music is entirely lackluster here.

Perhaps the most egregious mistake of all lies in Branagh’s penchant to rush through all of Poirot’s detective work. The flashbacks are far too frantic to follow and he rushes every single explanatory line. Finney, Ustinov, and Suchet knew just how to savor such revelations, making the most of Christie’s labyrinth solutions to the crime. And in the ’78 original, the telling of how the murders were committed was wholly compelling. Here? Meh.

And then there is the Armie Hammer problem. Allegations of twisted sexual peccadilloes knocked back the release of this film even more than the pandemic did so all that bad press could fade. (In actuality, this film has been in the can for almost two years now.) And because Hammer is now considered a pariah, his part in this film has been clearly tampered with as scenes involving him look trimmed and even crucial close-ups of him are missing. His character of Simon Doyle is the second most important character in the story after Poirot, but you’d never know it from this interpretation.

This film is better than Branagh’s previous Christie outing, but its mistakes keep it from being a great one. There’s some truly unfortunate green screen working against matters too, looking almost like screen savers, but the movie’s dark tone mars it more. The exact tone that all of Christie’s works should have onscreen is wholly present in Rian Johnson’s KNIVES OUT from 2019. His riff on Christie had serious moments and treated death as something significant, sure, but it was one helluva fun ride throughout. Perhaps the estate should let Johnson direct the next Poirot film; I’m sure he’d even get a better Poirot out of Branagh. The funny mustache is there, now if only Branagh would have more fun with it. 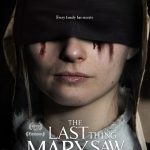 “THE LAST THING MARY SAW” IS A PERIOD FRIGHTENER WORTH SEEINGnews, non-illustrated, Review 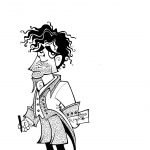