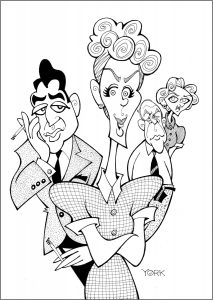 Original caricature by Jeff York of Javier Bardem, Nicole Kidman, J.K. Simmons, and Nina Arianda in BEING THE RICARDOS. (copyright 2021)

If you’re expecting Aaron Sorkin’s latest film BEING THE RICARDOS to capture the merriment of I LOVE LUCY, you might be shocked. What writer/director Sorkin’s film concentrates on instead is what it took to make the landmark 1950’s sitcom and how difficult it was to make “Lucy and Ricky Ricardo” into household names. Specifically, he presents a portrait of famed comedienne Lucille Ball in a way that few people may know of or be prepared to see. A million miles away from the zany housewife Lucy she played on the number one TV show in America, Ball was steely, laser-focused, and often a brusque perfectionist. Ball fought her way to superstardom, demanding to be taken seriously as an artist, and working doggedly to stay on top. It’s a fascinating story, one that Sorkin tells incredibly well here, and frankly, it should make audiences love Lucy even more.

Sorkin has always been fascinated with work and what it takes to do a job right as is evident in almost everything he’s written. His play A FEW GOOD MEN indicted overreach in the execution of military duty. TV’s THE WEST WING exposed the sausage factory that is Washington. His screenplay for THE SOCIAL NETWORK presented the sleazy beginnings of Mark Zuckerberg and his social media empire. And the criminally underrated MOLLY’S GAME illuminated all of the dangers involved in making a living illegally. In BEING THE RICARDOS, Sorkin showcases how making television comedy was very, very serious business for Ball.

Ball knew show biz was no cakewalk early on, approaching that world with her walls up. Played superbly by Nicole Kidman, Ball is sour and dour, even going so far in one early scene to apologize for being a crank, suggesting to her costars that she’ll be funny by Friday. Until that day, they’ve got a week to make it funnier, smarter, and worthy of the millions of viewers looking forward to the show. Ball was not only the star but a producer as well, a maverick in so many ways. And yet many in her orbit resented both her talent and tenacity. That included not just sexist Hollywood execs, but her costars, her writers, and yes, sometimes even her husband/costar/fellow producer Desi Arnaz (Javier Bardem).

Sorkin’s script throws even more at Ball, and all of it, in one week. She’s battling insecure writers (Tony Hale, Alia Shawkat, and Jake Lacy) who don’t have the story down pat yet for the newest episode. She’s trying to calm the running feud between second bananas William Frawley (J.K. Simmons) and Vivian Vance (Nina Arianda) who cannot stand each other. Additionally, Walter Winchell has accused her of being a Communist because of events 20 years earlier. And just for good measure, tabloids are reporting that Desi is cheating on her. Oh, and did I mention Lucy finds out she’s pregnant that week as well?

It’s a lot, almost comical in how thick Sorkin ladles it on here, but he’s done so to show all that Ball did have to deal with while trying to make the number one show on television. What makes Ball so sympathetic throughout, even when she’s defensive and rebellious, is that Sorkin shows the incredibly hard worker that Ball was. She was always demanding the best of everyone around her because she demanded it of herself too.

Helping us sympathize with Ball throughout are her often loathsome adversaries, like the cowardly network execs who lack vision, don’t respect women as equals, and happen to be racist as well. (They don’t love the fact that Ball’s husband on the show, as in real life, is Cuban.) Ball’s writers are all insecure too, becoming defensive when both Ball and Arnaz ask them for rewrites. And Vivian Vance doesn’t like being in Ball’s shadow and the way her boss puts her in her place is subtly brutal. Ball was often miles away from diplomacy, but she was almost always the smartest person in the room.

Even Desi ends up being quite the handful for her to manage. He loves Lucy, but he also loves fame, money, and the ladies who croon over his big band nightclub act. Kudos to Bardem for adding nuance to a part that could’ve easily been portrayed as a swinging dick scoundrel. He makes Arnaz clever and charming, even when he’s cheating on his wife and endangering their marriage and the show.

Simmons is always superb and he makes Frawley both a sage and a sot. He gets Lucy the best in many ways and wisely counsels her on how to win by softening some of her style. Arianda is terrific too, capturing Vance’s edge that belied her nice girl costar qualities. The rest of the supporting cast, including Linda Laven, Ronny Cox, Clark Gregg, and John Rubenstein, are top-notch here as well, but then Sorkin is nothing if not an actor’s director.

Of course, the whole shebang hinges on Kidman and it’s fascinating that Sorkin has only given her a few instances to ape famous scenes from the show. She stomps those grapes, yes, but that’s about it. The rest of the film showcases her in serious mode, taking on all in her way, and dressing down those that needed it. Kidman captures all of Ball’s strengths, even her husky, smoker’s voice that was at least an octave lower than her stylized sitcom voice.

Sorkin is becoming more and more confident as a director, and all of the production values here are impressive. Esteemed cinematographer Jeff Chenoweth delivers a sunny look to counter the show biz bile, and the superb production values from  John Hutman and costumes from designer Susan Lyell should be serious Oscar contenders.

Some may loathe turning a sprite sitcom on its ear, but that’s what makes BEING THE RICARDOS so fascinating. It’s a tough expose of Tinsel Town, sexism, racism, and the creative process. Ball may not have always been easy to love, but she earned the respect of those she worked with by hook or by crook, and I think she’ll win the audience’s respect all the more here.

(BEING THE RICARDOS is in cinemas now and will premiere on Amazon Prime on December 21st.) 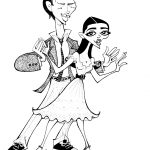 SPIELBERG AND KUSHNER BRING AN INSPIRED NEW SIDE TO “WEST SIDE STORY”illustrated, news, Review