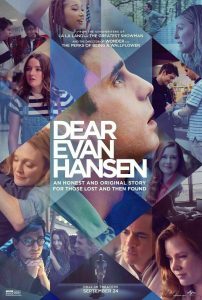 Screen adaptations are a tricky thing. Popular books, plays, and musicals don’t always convert to the medium of film, and DEAR EVAN HANSEN was one that was going to be tricky, no matter what. The story of Evan, a lonely teenager who weaves a web of lies about being besties with a dead-by-suicide classmate named Connor that he barely knew, is dark material for a musical. It succeeded on stage, however, due to the sheer theatricality of the Tony-winning production. The show exuded musicality what with all of its spotlights, moving scenery, and choreography of players, lifting the morose story into something inspiring. Director Stephen Chbosky, however, has miscalculated in the transfer to the cineplex, choosing to shoot his adaptation as if it were ORDINARY PEOPLE with a few solo songs dropped in now and then. There’s precious little about this adaptation that feels musical. Or uplifting.

The problem begins immediately as depressed high schooler Evan Hansen reflects on his existence. Actor Ben Platt, repeating his Tony-winning role, lists Evan’s world of woe in song. When Platt sang on stage, he was aided by all that aforementioned theatricality. Here, however, Evan sings in a realistic setting, with little happening around him. The number falls flat, and sadly, most of the numbers in this film suffer from similar stumbles. You can ground musical material in a certain reality, as was done in LA LA LAND, but at some point, theatrical trappings need to enter the picture. LA LA LAND’s opening took place on a genuine Los Angeles freeway, but two minutes in, everyone was dancing atop their cars. No such showmanship shows up here.

This adaptation, written by Steven Levenson, does handle some of its dialogue-driven drama reasonably well. Evan’s interactions with the grieving family of Connor (Colton Ryan), headed by a superb Amy Adams, feel raw and are quite moving. But when songs get dropped in around the players, the undercooked musical numbers feel almost like an intrusion.

Evan’s escalating lies present problems in the story too, be it on stage or film. Rooting for such a liar isn’t easy. And Evan’s con doesn’t have any razzmatazz to it the way Professor Harold Hill’s deceptions did in THE MUSIC MAN. We all know too that soon enough, Evan is going to get his comeuppance, but there’s no fun in the fate that awaits him or us.

Julianne Moore is very good as Evan’s moral mom, and Kaitlyn Dever works wonders as Connor’s bitter younger sister. Lead Platt gives it his all, and he’s often very touching, but he’s too old for the role at 27. Adult actors have always been cast as teens in Hollywood, but that practice doesn’t help matters here. If anything, it adds to the tonality contradictions. If it was a younger actor, someone clearly 16 or 17, Evan’s naivete would play more empathetically. This adaptation just can’t quite get a handle on how grounded or theatrical it should be.

DEAR EVAN HANSEN isn’t nearly the train wreck that the movie version of CATS was, but this botched adaptation proves how hard it is to get a musical right on film, particularly those with stories heavy on tragedy. EVERYBODY’S TALKING ABOUT JAMIE, another adaptation of a teen-centric musical, premiered this month and worked wonders with its strong and confident lead character, not to mention the production’s exuberant embrace of singing, dancing, and showmanship. If only DEAR EVAN HANSEN reveled in its musical origins as much. 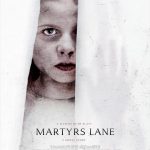 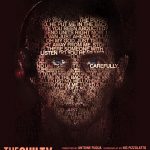 JAKE GYLLENHAAL HOLDS THE SCREEN IN THE NEW THRILLER “THE GUILTY”news, non-illustrated, Review