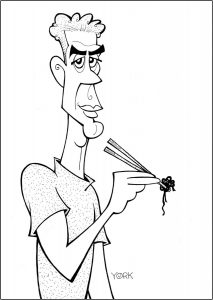 Original caricature by Jeff York of the late Anthony Bourdain in ROADRUNNER: A FILM ABOUT ANTHONY BOURDAIN (copyright 2021)

It has been said that a cynic is merely an idealist who’s been repeatedly burned. That could be apropos for celebrity chef and television host Anthony Bourdain. And in ROADRUNNER: A FILM ABOUT ANTHONY BOURDAIN, the new documentary examining his life, the man is showcased time and time again being stymied by the ugliness of life while trying to explore the tastes and treasures that the world has to offer. It’s a fascinating character study, as well as a log of his ups and downs in his career and personal life. All in all, it makes for a sharply observed documentary film for both his fans and filmgoers alike.

The film, directed by Morgan Neville, makes a number of key and correct decisions early in the telling. Most of what appears onscreen are behind-the-scenes video clips of his career in the public eye. Filmmaker Neville lets the moments observing Bourdain’s movements and words mostly speak for themselves with little editorial interference. We are introduced to a restless man, working hard, always thinking, forever wanting more. Bourdain at times comes off like a cliché New Yorker, never quite happy, but living for the battle.

Neville shows incredibly insightful bits of the stories behind Bourdain’s first successes as a chef at Brasserie Les Halles to authoring his bestselling book Kitchen Confidential to his popular shows where he traveled the world over. Especially effective are showcasing how various stories came to be and some of the funnier moments behind the scenes. One of the most outrageous is what it took to get him to eat a raw, still-beating heart of a cobra. It’s gross and horrifying, but amusing in its dark, awful kind of way.

Interwoven with it all are on-camera interviews with Bourdain’s colleagues and friends, those who knew him best. One of Neville’s smarter decisions was not to stuff his doc with celebs chiming in about their opinion of Bourdain and his tragic suicide in 2018 at 61 years of age. Instead, all those talking about the complex man are those who speak with authority about him. It makes for a deeper portrait of the talented yet troubled soul and raises this take on his life above other explorations.

Bourdain is shown to be a charming man, a passionate and caring man, thrown into a world that often has little use for such characteristics. While covering a story about the burgeoning city of Beirut, he and his production crew find their filming stalled as war breaks out. It really affects Bourdain and from there, he not only introduced his viewers to culinary delights and customs throughout the world but international concerns and political issues as well. He wore his passion on his sleeve, and often his earnestness got him into trouble.

A restless spirit, Bourdain was never one to remain too tied down, and his attempts at marriage and family life seemed to contradict his very nature. He failed at them by and large and it haunted him. Still, he desperately sought love and human connection and grabbed it where he could. His production team became his real family, and the various members of his inner circle share both the good moments and bad with him here.

Unfortunately, Bourdain eventually fell under the spell of actress and filmmaker Asia Argento while filming his PARTS UNKNOWN series for CNN in Italy. The two fell madly in love with each other, but he was blind to her ego and his despair from the fallout of their relationship turns the tide for him.

It’s a difficult chapter in his life, and hard to watch especially knowing what comes shortly after, but the doc wisely doesn’t hold back in the truths of their affair and his naivete about it. Yet despite warts and all, Bourdain comes off as an admirable man here, growing as he aged, and discovering even more about himself than all the dishes and people he encountered throughout the globe.

Arguably, the journey to parts unknown were those truer parts of himself. This documentary does the same for us, giving a thorough and riveting character study of a complex man, a work still in progress and gone far too soon. 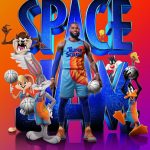 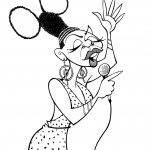 “SUMMER OF SOUL” IS THE FEEL-GOOD MOVIE OF THE SUMMERillustrated, news, Review