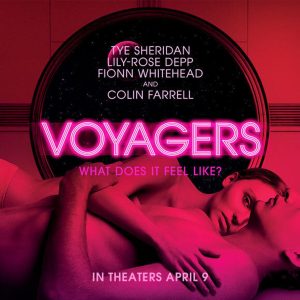 There actually is a brilliant idea in the new movie VOYAGERS. Unfortunately, it’s a TV idea, not a feature film one. The premise of the story is that in the future, Earth becomes so uninhabitable that mankind needs to move to another planet. Granted, that cliched trope isn’t novel anymore, but the necessary 86-year trip to that planet presents a host of brilliant possibilities. What would it be like to be confined on a ship for that long? Even a newborn baby placed on the ship would likely pass on before arriving at the destination, so what does that do to an astronaut’s psyche? How do the people pass the time in such a limited existence? The premise demands a longer-term vehicle like a television program than merely a one-hour and 48-minute sit. It’s a missed opportunity to dramatize such an unfathomable premise as being stuck on board a ship for almost nine decades.

But then, VOYAGERS is nothing but one big, missed opportunity. Instead of asking such obvious questions about time and travel and confinement, VOYAGERS seems content to merely play out LORD OF THE FLIES in space. Granted, showing youth break down without adult supervision, societal rules, or legal accountability, could make for an interesting riff on William Golding’s classic 1953 novel, but the film doesn’t expand the ideas from that book. It merely reproduces them. Filmmaker Neil Burger has done excellent work before (THE ILLUSIONIST, LIMITLESS), but in VOYAGERS he misses the better story about isolation and all those decades in a ship. Instead, the one he chose to tell doesn’t excite and his narrative quickly gets bogged down in cliches, some terrible, two-dimensional acting, and a repetitious visual scheme aboard the ship.

Because of man’s awful treatment of Earth, a mission is devised to get the population off the planet and onto a distant planet to start over. Thirty children are chosen to be trained to be able to manage the 86-year trip necessary to reach the orb and scientist Richard Alling (Colin Farrell) is called in to spearhead it. He grows very close to his charges and ultimately ends up joining the spaceship mission to become their sole ‘parent’ aboard.

The teenagers, mostly played by actors in their mid-20’s, are a beautiful lot, sleek and squeaky clean, looking like a fashion spread. Even their uniforms have a monochromatic, Calvin Klein loungewear-feel to them. Alling supervises their lives which seem as boring as the navy blue color of their garb. They eat listlessly, work out listlessly, and gaze upon each other listlessly. You’d think with so many beautiful people in such a confined setting, and having lived together for years already, they’d have more connection to each other, but they are utterly passionless.

Each day, they swallow a blue drink of vitamin supplements, but it’s not long before they figure out it’s a drug keeping them docile. When Chris (Tye Sheridan) and Zac (Fionn Whitehead) stop partaking in protest, their emotions start to spike. Suddenly, they are expressing both joy and anger. Zac wins in a wrestling match during workout time and rejoices like he’s won an Olympic medal. Both even start to take interest in the comely Sela (Lily-Rose Depp).

Soon enough, everyone is getting emotional about everything, taking the slightest of slights personally and forming antagonistic cliques as quickly as you can ask, “Who has the conch?” Here, the LORD OF THE FLIES parallels become overt with Zac becoming primal like Jack from the novel, Chris turning into his foil a la Ralph, and poor Chante Adams’ Phoebe assigned the role of “Piggy.” Like that memorable Golding character, Phoebe is a brainy and talkative Greek Chorus who is doomed. Violence ensues, factions are established, and the worst of human traits turn the lot into warring, lusting, conniving little shits.

And while Burger and crew update some of Golding’s tropes well, like the fact that you can’t really hide on a small island or a spaceship, most of the plotting becomes quite predictable, even if you haven’t read the book. Visually, Burger misses opportunities to extend the riff. The physical appearances of the young men and women barely change, and their clothes remain pristine. If all of the rules are going to break down, wouldn’t those bland uniforms be the first to go?

Burger miscalculates too with his preoccupation with production design. The director has his accomplished DP Enrique Chediak linger over the same long hallways and bric-a-brac so much that the ship becomes as dull as the costumes. And all that attention on production design short-shrifts the characters. Whitehead, who was quite good in DUNKIRK makes for a dull, one-note villain her, mostly leering out from his heavy eyebrows. Sheridan and Depp make for a bland hero and heroine, whiffing the passion in the film’s one big love scene. The poster had more heat, and in pulp like this, those moments should at least be visually lush.

Burger misses so many opportunities to be more clever, sexy, and exciting. His script also ignores obvious questions: What is the plan once they get to the planet? How does the pecking order work onboard? Are some trained as doctors, farmers, even plumbers? If these kids were trained for years on Earth to comply, why do they need to be medicated so much now? Here’s a question I have – who would want a planet filled with such drug-infused zombies anyway?

Good science fiction would ask all these questions and answer them. Given more time, like a television miniseries or multi-season program, the bigger issues of an 86-year voyage could’ve been explored properly. Instead, VOYAGERS is so inept it even misses the opportunity to make a definitive statement about the world’s confinement during the pandemic lock-down. Instead, this movie seems content to merely revel in its claustrophobic sets. 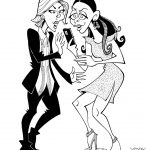 ADRIANA LEONARD AND CARLEY MARCELLE GIVE THEIR STORY ABOUT TECH AND FRIENDSHIP A TEST-RUN IN THE WEB COMEDY SERIES “BETA”illustrated, news, Review 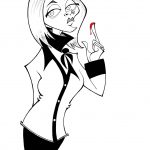