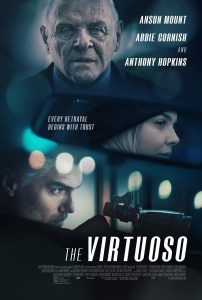 A successful assassin can’t shake the death he caused of an innocent bystander. His enigmatic boss may be playing both sides against the middle. And a host of potential enemies will challenge the hitman in ways he’s never been challenged before. Stop me if you’ve seen this movie before. Oh, you have, have you? Well, so have I. Yet that is the very premise of the new thriller THE VIRTUOSO which serves each trope up earnestly, almost as if it didn’t realize they are cliches. Despite such utter familiarity, somehow the film manages to work. That’s due to its deliberate pace, a disquieting sense of mood, and a terrific supporting performance by Abbie Cornish.

Those characteristics are subtle compared to some of the more overt ones that almost stop things cold before the story gets going. The film is narrated by the lead character who talks to us in a showy, self-conscious second person. The hitman, named in the credits as “The Virtuoso,” talks about discipline and code and yet we know his rules will soon be broken. And, of course, you can’t have a movie about a hitman without an existential crisis and this guy doesn’t know how he can go on anymore after a screw-up that left an innocent bystander dead.

“The Virtuoso” (Anson Mount) had it all planned to the second as he prepared to shoot out the tire of his latest target, but then a mom and her kid got in the way. Mom ended up perishing in a fiery death after the auto blew up, and her death screams start to haunt the assassin. He can’t shake the torment even when he retreats to the solace of his hidden cabin in the woods and interacts with an adorable mooching pooch from the lot next door.

The hitman is so distraught, he even ignores the phone calls from his mentor (Anthony Hopkins, of all people), but is tracked down at the cemetery where the Virtuoso’s dad is buried. There, Hopkins’ character pontificates about the duty of a soldier, and the 83-year-old double Oscar winner makes it sound almost like Shakespeare. It’s all hooey, of course, with the point of the scene existing to show that employer and employee no longer trust each other, as well as set into motion the big ‘last job.’

The assignment is to take out someone named “White Rivers” in a lonely, small town. The hitman arrives in town and cases the diner where he’s told his mark will be and the customers inside all seem rather suspicious. There’s the too-knowing waitress (Cornish), a shifty loner (Eddie Marsden), and an odd couple (Richard Brake and Diora Baird). Then, a sleepy deputy (David Morse) enters and ruins the hitman’s best-laid plans, and he must wait for a better opportunity to strike.

From there, the film becomes more intriguing. The hitman must figure out who’s who and his waiting game creates escalating tension as he tries to regain control of his mission despite having to break into motel rooms, navigate icy roads, and resist the comely come-ons from the waitress. Cornish makes her so sly and alluring, he will ultimately fold, but is she genuine? She’s given a great scene by screenwriter James C. Wolfe where she lays bare her loneliness and disappointment in men, even though she’s obviously willing to engage in meaningless one-night stands.

Director Nick Stagliano films the story like the hitman himself, methodically, carefully, and quietly, letting the natural tension build in each scene, never rushing, never exaggerating the violence. It’s subtle, straightforward work for this kind of film, and his disciplined efforts make even the clichéd parts eminently watchable.

One wishes that Marsan and Morse had bigger and more fleshed-out parts, and Mount looks a little too GQ to blend into his surroundings as the hitman professes is a must. In a different film, he’d dress down a lot more, but this film wants him to have a certain Bond-ish or Clooney-esque sex appeal. In many ways, this film resembles Clooney’s hitman tale THE AMERICAN from 2010.

THE VIRTUOSO ends up demonstrating that neither the hitman nor the film lives up to such a name, but it’s a solid, smart effort in many ways that are unexpected and that helps make this an enjoyable and decent distraction. And as long as Cornish is onscreen, the movie reaches some sublime moments that will resonate long after the end credits have rolled. If the fates were fair, she’d become a bigger star as her virtuoso turn here proves. 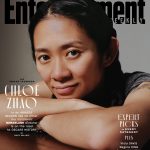 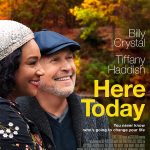