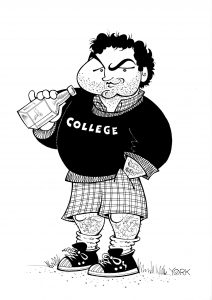 The new documentary BELUSHI kicked off the 56th Chicago International Film Festival this past week and the strong film explores the late, great comedian John Belushi as well as stands as a fitting tribute to the city’s favorite son. And while filmmaker R. J. Cutler’s piece is a little long, in addition to being a tad too reverential, it vividly illustrates what made the comic tick and ultimately explode, leaving this planet at the tender age of just 33.

Cutler did his homework. It’s chock full of dozens of interviews, many unheard before, along with telling insights from oodles of Belushi’s intimate friends and colleagues. Everyone from Dan Aykroyd to Richard Zanuck to a plethora of old neighborhood members chimes in about Belushi’s talents and demons. Cutler also utilizes a myriad of interviews with Belushi himself and has gotten his hands on an absolute treasure trove of family photos, home movies, and show biz clips to give us a vast sense of the man and his three decades. 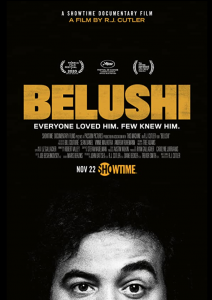 Cutler clearly adores Belushi and makes the case for his invaluable contributions to the success of SATURDAY NIGHT LIVE. Belushi’s larger-than-life, bad boy comedy became a type, a phenomenon, and paved the way for the likes of Chris Farley and Kevin James. Wisely, Cutler’s doc showcases a multitude of clips from SNL, demonstrating Belushi’s abilities. He essayed outlandish characters, like the Samurai, Joe Cocker, the angry bee, as well as subtler ones including the Albanian diner owner, or Henry Kissinger praying with Ayroyd’s out-of-control Nixon. Belushi was a great comedian and his blue-collar ethos connected with audiences and his colleagues as well.

Even so, Belushi’s time on the show was also filled with numerous controversies. He fought often with producer Lorne Michaels, was hugely jealous of Chevy Chase’s breakout role in the first season, and succumbed to the lure of easy drugs that fall into the laps of the celebrated and moneyed. As awful as some of Belushi’s self-destruction is to witness in this film, Cutler manages to shore up the positive, especially with his inclusion of dozens of Belushi’s love letters to his wife Judith Jacklin. (Bill Hader narrates them as Belushi’s stand-in throughout.)

When Cutler doesn’t have any existing pics or vids to accompany the story, he utilizes images created by extraordinary animation filmmaker Robert Valley. Valley wrote, visualized, and directed the Oscar-nominated short PEAR CIDER AND CIGARETTES in 2017 and uses the same gorgeous yet haunting visual style here. Valley’s images readily recall his tale about old high school chum Techno Styles from his award-winning 35-minute film, and Belushi had a lot in common with that protagonist: deep self-doubt, a penchant for trouble, and a deadly drug habit. 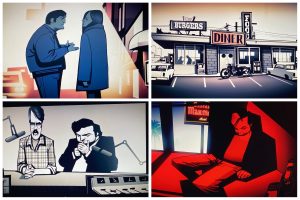 Valley illustrates Belushi’s childhood, as well as his rise during his 20s as an improv performer at Chicago’s Second City, and many additional highlights beyond. Valley’s work culminates with the mournful last hours of Belushi holed up at the Chateau Marmont in Hollywood, high as a kite and down on life. Valley bathes the hotel room in red light, veritably placing Belushi in an inescapable corner of hell.

As good as all this is, the documentary struggles in wholly capturing the troubles Belushi had with cultivating his talent on the big screen. Cutler short shrifts too many of Belushi’s film failures, choosing to concentrate more on his successes like ANIMAL HOUSE and THE BLUES BROTHERS. (There’s way too much about Belushi’s singing career too.) But why did the actor’s film career falter so after all those early successes? Was it ego? Drugs? Or something more?

What was it in Belushi that made him take on such mediocre parts in films or allow himself to be cast in material that was just so patently wrong for him? He was far too young and wild to play the subdued lead in NEIGHBORS, just as he was miscast as a Mike Royko-type in the fish-out-of-water romantic comedy CONTINENTAL DIVIDE. What drove Belushi to sabotage his career in such ways are questions left mostly unanswered here.

Cutler spends a long time on his subject, one hour and 48 minutes, and yet still doesn’t dig quite deep enough. In many ways, Belushi’s story is as old as any Tinsel Town tale: a young talent, haunted by unloving parents and rabid insecurities, loses the battle with fame and drugs. Still, it’s a tale Cutler tells exceedingly well, even though he misses opportunities to mine Belushi’s fall even further.

(BTW…you can still catch BELUSHI by going to the Chicago International Film Festival website at https://www.chicagofilmfestival.com until the 25th, or wait until it premieres on Showtime this November 22nd.) 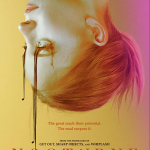 THE DEVIL IS IN THE DETAILS IN THE HORRORS OF “NOCTURNE”news, non-illustrated, Review 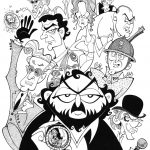 THE DOC “KUBRICK BY KUBRICK” LETS THE FILMMAKER SPEAK FOR HIMSELFillustrated, news, Review