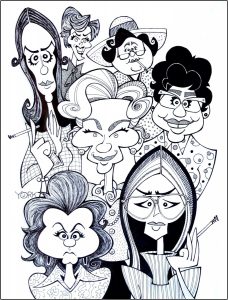 Original caricature by Jeff York of the cast of MRS. AMERICA (copyright 2020).

It seemed almost fitting that MRS. AMERICA, the FX/Hulu miniseries about the struggle to pass the Equal Rights Amendment during the ’70s, should conclude its run in the week that saw our nation reach a boiling point after the Minneapolis police murdered a black man in broad daylight. After all, both stories showcased America’s white male patriarchy doing their utmost to rob a minority group of their rights via oppression, economic injustice, and yes, killing. MRS. AMERICA turned out to be a cautionary tale for our times, indicting the USA then and now for its stubborn unwillingness to acknowledge and respect all of its constituents.

Ironically, the titular villain in MRS. AMERICA was a woman, specifically Phyllis Schlafly (Cate Blanchett), a rabid right-wing wonk determined to fight the “libbers” and ensure that the Equal Rights Amendment would never become part of the Constitution. She wanted to kill equality so women couldn’t be drafted, among other rather selfish stances, and it’s almost shocking in how effective her old-fashioned arguments turned out to be back then during the era of civil rights and free love. But make no mistake, the more heinous forces at work during the ’70s, as this show strives to point out, were the multitude of suppressive white men in power.

For as awful as Schlafly was, she too was thwarted at every turn by various men impugning her sex and capabilities. Even her husband Fred (John Slattery) is presented as a stifling S.O.B. in the nine-part series, an old school pol who still expected dinner on the table every night from her, as well as his wife’s utter compliance in bed even if she had an exhausting day.

And while the show may have focused primarily on the battle on convention floors and in various state legislatures between Schlafly and feminist leaders like Gloria Steinem (Rose Byrne), Betty Friedan (Tracey Ullman), Bella Abzug (Margo Martindale), Jill Ruckelshaus (Elizabeth Banks) and Shirley Chisholm (Uzo Aduba), every last one of them had to fend off the selfish and myopic interests of the male hierarchy at every turn.

How so? Well, the series showcased how Steinem was burned by George McGovern’s campaign director Gary Hart when he went back on his promise to include an abortion-rights plank in the platform at the 1972 Democratic convention. Additionally, the show dramatized how Republicans, including then-President Richard Nixon, stood by fecklessly as Schlafly and her minions worked to eradicate the ERA, even though the majority of them favored it. Plus, the show slyly nabbed the press corps as well for too often focusing on whether the feminist leaders, like Abzug Friedan, were ‘likable’ enough, or even attractive. Depressing moments in history, for sure, yet the show managed to bring them to light to new audiences or those who’ve forgotten, in clever and immensely entertaining set-pieces that could make you laugh as well as cry.

In fact, in virtually every scene in the series, a white man in power demeans a woman in the room with him. Schlafly, while forging policy against the SALT treaties with some of the GOP’s biggest muckety-mucks, is asked to take notes of the meeting because she’s a woman and “probably has the best handwriting.” Chisolm, the first female and black candidate for president in ’72 is treated as little more than a token even by liberal candidate McGovern. The suffocating patriarchy is so demeaning that it even rubs off on the female leaders who should know better. When Steinem worries that she’s becoming the face of the National Women’s Political Caucus due to it being pretty, New York congresswoman Abzug reminds her that she’s got a great ass and bustline too. With friends like that, who needs enemies?

MRS. AMERICA could’ve been played as a black comedy, and there are moments where the ridiculousness of the politics presented suggests the satirical overtones present throughout Michael Ritchie’s 1972 THE CANDIDATE. Still, the show manages to stay serious throughout, never overplaying the ludicrous no matter how grounded in fact it is. If anything, there is an element of tragedy to all that’s presented here, head-scratching moments that show just how shameful the American political process was on almost every level.

Nowhere is this most evident than in how Schlafly deals with the women supporting her “STOP ERA” platform. More often than not, she talks down to them or belittles them in ways similar to her male counterparts. Schlafly worries about how polished or pretty her ‘sisters’ are, sometimes seeming more preoccupied with faces than family values. In the penultimate episode focusing on fictional supporter Alice Macray (Sarah Paulson), the naive ally of Schlafly’s not only learns that the opposition is both admirable and earnest, but she gets a number of tough lessons in how little her conservative housewives think of her. At the end of a long and trying National Women’s Conference protest in Houston, even Schlafly puts Alice down, offering a withering assessment of how bedraggled she looks.

Paulson is extraordinary in that eighth episode, and all of the other stars surrounding her are equally wonderful. Ullman and Martindale give nuanced and subtle performances playing two real-life characters that could have easily slid into caricature. Aduba captures all the pain and frustration of Chisholm as she fights her losing battle to be taken seriously at the convention. And while Elizabeth Banks doesn’t have as much screen time as some of the others, she shines in every frustrating moment as Ruckelshaus, the Republican advocate fighting an uphill battle to get women to be taken more seriously in the GOP.

Blanchett has most of the screen time and captures Schlafly’s iron maiden/den mother style perfectly, flashing a ready smile that looks a lot more like a sneer. At times, the Aussie actress, doing a flawless midwest American accent, plays just outside of the role, commenting on the monstrosity of the Midwest matriarch. (Blanchett lets us know she’s playing the villain.) It was daring of the production to make the antagonist the central character, but more often than not, Cate is great, working well with the esteemed ensemble around her.

The best performance in the series is Byrne’s portrayal of Steinem. For starters, her physical resemblance to the feminist leader is uncanny, helped immensely by superb wigs, makeup, and styling. But most of it is all Byrne’s doing, from capturing Steinem’s gait to her halting voice. It’s an Emmy-worthy turn, especially in the scenes where she suffers indignities such as her publisher overruling her desire to put Chisholm on the cover of Ms. magazine with a cartoon image of Wonder Woman instead. Byrne makes such scenes quietly heartbreaking, yet she can deliver the laughs too. Her dry quips are witty bombs dropped on adversaries with utter relish.

Sure, the below-the-line craftspeople have a field day with the costuming, hairstyling, production design, and pop music soundtrack, but the show never becomes too self-conscious. Instead, the writers, headed by Joshua Allen Griffith, and directors, including Anna Boden and Ryan Fleck, keep the sexual politics the focus of the show at all times. They treat the material seriously, showing smart and strong women fighting the power at every turn, no matter if they were on the side of equal rights or against it. The irony of that conceit is demonstrated over and over again from Steinem’s struggles to be taken seriously to Abzug’s misguided efforts to play hardball like her male mentors to Schlafly getting royally screwed by the Reagan administration after years of carrying the water for the conservative wing.

All period pieces comment on the present, and MRS. AMERICA is no exception. Despite incredible strides, our nation is still failing the have-not’s, and unbelievably, many of the rights women have had for over 50 years in this nation are being re-fought again due to a presidential administration determined to thwart equal pay, limit the freedom of expression, and take away the control a woman has over her own body.

Indeed, everything old is new again. COVID-19 proved that this year bears too strong of a resemblance to 1918 and the Spanish Flu plague. This week’s protests, violence, looting, and vicious policing looked far too much like 1968. And God knows the MRS. AMERICA miniseries reflected a fight that’s never gone away. Past is prologue as the saying goes, but this superb miniseries proved that the more things change, the more they stay the same. Shame on America. 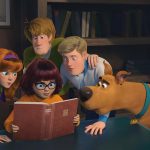 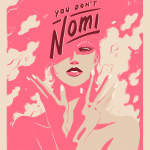