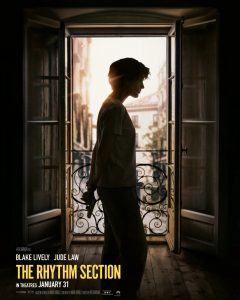 One of the qualities that makes Blake Lively a compelling actress is her willingness to stretch. She’s done period pieces, horror, comedy, thrillers, and thrown herself into roles, body and soul. She’s played ingenues, society girls, vamps, and villains. In her three best performances, she played against her sunny, all-American looks, acing trickier, darker roles. In THE TOWN, her first big breakthrough on the big screen, she played a tough and trashy Boston barmaid. In THE SHALLOWS, she played a fierce surfer battling a shark. In A SIMPLE FAVOR, she played a strutting man-eater that would’ve made Joan Crawford blush.

In her new film THE RHYTHM SECTION, Lively is tasked with playing Stephanie Patrick, a British college grad aching to seek revenge upon the Middle Eastern terrorists who blew up a plane transporting her family. The movie is another in a long line of thrillers that owes a lot to LA FEMME NIKITA, the BOURNE series and TAKEN as once again, a specially-trained assassin is pitted against a cadre of international thugs. And here, as in knock-offs RED SPARROW and ATOMIC BLONDE, the ass-kicking assassin is female. It’s a stretch for Lively, and unfortunately, the role and movie do her no favors.

For starters, such a role simply isn’t novel anymore. There’s a “been there/done that” quality to such female roles after the likes of Charlize Theron, Jennifer Lawrence, and a host of other A-listers have gone before. Secondly, as written, Lively’s character of Stephanie is a dud. She’s a mope, constantly grousing about as she seeks her vengeance. There’s no fun or wit to her. I honestly can’t think of one good line or chunk of dialogue she uttered, certainly nothing in the vein of Liam Neeson’s classic “What I do have is a very particular set of skills” speech from TAKEN.

Worse yet, THE RHYTHM SECTION stacks the cards against Stephanie even more by starting out the movie with her in such a state of depression over the death of her family that she’s become a junkie prostitute. Lively certainly lives the role, looking haggard and dead-eyed, with bruises up and down her body like she’s a bruised banana. Stephanie’s a virtual zombie as she monosyllabically negotiates with a john in an early scene, but there’s no snap or crackle to any of it. It’s all as bleak as the look of the cinematography.

Even when Stephanie decides to get clean and in shape to avenge her family, the story still can’t quite let go of her melancholy. She is filthy, bedraggled, and stares forlornly at photos of her dead family wherever she goes. The character’s self-pity is so consuming it gets an intrepid reporter (Raza Jaffrey) killed and endangers the work of a former MI-6 agent working underground in Scotland.

Jude Law plays that spook, the one who will train her on her mission of murder. He’s the best thing in the film, underplaying his role with just the right amount of lived-in swagger. Unfortunately, Lively exhibits zero chemistry with him and fails to spark anything remotely funny or sexual during her tutelage. It should be fun watching this lethal Henry Higgins turn the fair lady into a cold killer, but it’s all a slog, as dull as the umpteen flashbacks showing Stephanie enjoying her folks while they were alive.

Director Reed Morano comes from the world of high-end cable drama where she did Emmy-winning work on THE HANDMAID’S TALE, but she seems out of her depths in such pulpy fiction here. Morano treats the material so somberly, it might as well be a funeral dirge. She doesn’t even know how to bring off a simple love scene between Sterling K. Brown and Lively late in the game. She turns their sexual imagery together into a weird mix of gauzy dissolves and awkward positions.

Mark Burnell’s script, adapted from his own novel, has some attempts at throwaway humor but the bits land like a lead balloon due to all the moroseness swirling around them. The only scene that clicks is an extended training bout between Lively and Law done in one long take a la JOHN WICK. It’s really those two doing all the stunt work, impressively so, but then the resolve of the scene includes a knee to the balls and the cheap cliché ruins the scene.

Making matters even worse is that all the training barely pays off for Stephanie. In the field she loses her nerve, again and again, botching missions and failing to take out her targets. She can’t even dress up for a Mata Hari-esque seduction without breaking down into tears. Lively doesn’t look strong enough in the role of a trained, martial arts assassin either. (She was more buff fighting that shark years back!) The character of Stephanie doesn’t make any sense, and neither does the movie.

Lively, when she lives up to her last name in the movies, does impress. But when she’s playing such a dud of a character as she is here, she flounders. Where’s the fun in such a sourpuss, a humorless script, and leaden direction? And where’s Luc Besson when you need him? 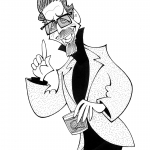 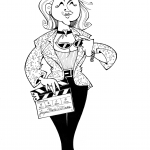