Expectations are sky-high for Marvel Studio’s latest superhero film CAPTAIN MARVEL. It’s not only the movie studio’s first big-screen adventure with a female lead in Academy-Award winning Brie Larson from Room, but it also stands as a critical bridge between the two-part epic of AVENGERS: INFINITY WARS and AVENGERS: ENDGAME. (She’s the one that Nick Fury paged as he disintegrated in that first part’s post-credit sequence.) Marvel can rest easy that they’ve got another fun movie on their hands, and yet its greatest strengths are those moments more human than heroic. And, in some instances, more feline, as a supporting orange tabby almost steals the entire picture.

Married filmmakers Anna Boden and Ryan Fleck do a decent job of delivering the requisite action here, but their strengths lie in creating quirky characters and the loosy-goosy interactions between them. In movies like HALF NELSON (2006) and IT’S KIND OF A FUNNY STORY (2010), they showcased eccentric characters that drove simple stories. Much of the same comes through in Captain Marvel when heroine Carol Danvers isn’t acting like an avenger. She is far more interesting when she’s down-to-earth, literally and figuratively.

In fact, Boden and Fleck seem far less interested in a lot of the typical beats of a Marvel origins stories as evidenced by their minimalizing of the time they spend on such tropes. Their script, written with Geneva Roberston-Dworet, truncates Danvers’ youthful flashbacks that would normally take up a ton of screen time in other Marvel movies. The script moves things along so swiftly that the back-story of Danvers’ strained relationship with her father gets covered in a breathless, blink-and-you’ll-miss-it moment.

Boden and Fleck don’t seem all that interested in the excessive backstory about the alien war at the core either. They don’t set up the Kree or the Skrulls particularly well, and they don’t even bother to give most of the Kree brotherhood any genuine personalities. (The formidable Djimon Hounsou is one of them, but he’s given virtually no character to play). The directors seem almost apathetic about the lore of this galactic conflict, preferring to get past the ‘makeup fest’ so they can turn their attention to the more silly stuff. Indeed, Danvers’ fish-out-of-water story when she lands back on earth is quite funny and it’s where the movie hits its stride.

Because Danvers’ origin story takes place in the ’90s, it gives Boden and Fleck all the more opportunity to make hay out of that decade’s pastiche, in addition to making fun of a younger Nick Fury (Samuel L. Jackson) too. The movie becomes an out-and-out comedy at times, especially with Fury fretting over a wayward cat. (More on that later.) The humor allows Larson to play something she’s more comfortable with, specifically bantering wryly with a game Jackson. Watching her pose dramatically in her heroic postures doesn’t quite suit her any more than the clearly padded costume she’s wearing to make her more buff. Her strengths, despite all the chopping and kicking she’s asked to do here, lie in her droll wit and dismissive side-eyes.

The filmmakers have a field day taking the piss out of antiquated 90’s relics like Blockbuster stores, the painfully slow downloads on early computers, and a lot of the music from that period that hasn’t aged particularly well. (Sorry, Gwen Stefani.) The most fun comes from seeing Fury 25 years younger, with a full head of hair and both eyes. Jackson doesn’t get that many chances to be comedic onscreen, and he relishes playing such a version of his character.

Soon, Danvers and Fury are running all over hill and dale, trying to figure out what the Skrulls are up to, as well as figure out her mysterious history since her memories were lost after she crashed on the Kree planet. That past of hers, as well as the true motivations of the Skulls, hold the key to her powers that include the ability to harness energy, be immune to bullets, and fly. As the two schlep all over Los Angeles, Danvers gets to apply her skills on earth, often in front of bewildered bystanders. The scene on the LA subway where she throws down with a Skrull disguised as an old lady is one of the film’s comedic highlights.

Still, the funniest moments involve that cat previously mentioned. The orange tabby is named Goose, and it keeps popping up while Danvers and Fury are sleuthing. The cat even manages to stow away aboard Danvers’ jet earning the film’s biggest laugh when the kitty is shown reacting badly to zero gravity. Adding to the burlesque is the fact that the Skrulls fear the little creature, thinking that it’s a tentacled alien out to eat them.

It seems every critter in this movie is dealing with identities in question, from Danvers not knowing her backstory to the Skrulls’ abilities to morph into others. The Kree are not all they seem to be, of course, including hunky mentor Yon-Rogg (a game Jude Law), let alone the mysterious Skrull leader Talos (an insinuating Ben Mendelsohn). It’s even hard to get a bead on just who Dr. Lawson (Annette Bening) is in the overly complicated plotting. She looks dynamite in her green contacts and fitted leather jacket, but is she friend or foe?

One of the most surprising things about this film is that there is no extraneous love interest given to Danvers, something almost miraculous for material like this. Instead, the relationship that is given time is her friendship with fellow pilot Maria (Lashana Lynch). Single mom Maria fought hard to make it in the macho world of the military alongside her bestie, and daughter Monica (Akira Akbar) isn’t missing a father figure with these two are around. To that end, the film is a bit too on-the-nose with the “girl power” machinations, but at least neither female adult in the story requires a man for fulfillment. How refreshing is that in the he-man, superhero universe?

Less fresh is the somewhat typical final battle in space as Danvers takes full ownership of her powers, a third act that echoes the finale of 2017’s WONDER WOMAN far too closely. Fully embracing her Captain Marvel persona, Danvers throws all the alien baddies into a lot of scenery but is careful not to kill anyone. It’s all a little too safe and too dull, and the excessive CGI doesn’t help matters. It would be nice if Larson were genuinely participating in most of the action, but she seems to have been replaced by a digital version of the character most of the time. As expensive as all of the effects are here, the greatest ones remain the ability to shave 25 years off of Jackson, as well as fellow agent Coulson (Clark Gregg, reprising his earlier Avengers film role.)

For all of Marvel’s success in 20 some movies now, their third acts too often play anti-climactically, and so does this one. The superiority of the MCU over the films from DC lies in their ability to create more interesting characters and let humor inform much of their personalities. Such attributes get lost when these endings trot out the inevitable, wham-bam smackdowns as they almost always do. Wouldn’t it be great to have a climax in one of these films where fighting didn’t solve the galaxy’s problems, and smarts did instead? The purpose of Danvers’ powers in this film is to “end all wars,” but it seems like all that electricity and derring-do is really there to keep her in the role of one helluva war machine. So much for marvelous. 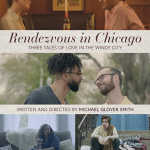 “RENDEZVOUS IN CHICAGO” FINDS FASCINATION IN THE COMPLEX CONVERSATION OF COUPLESnon-illustrated, Review 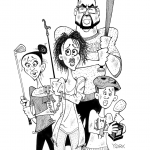