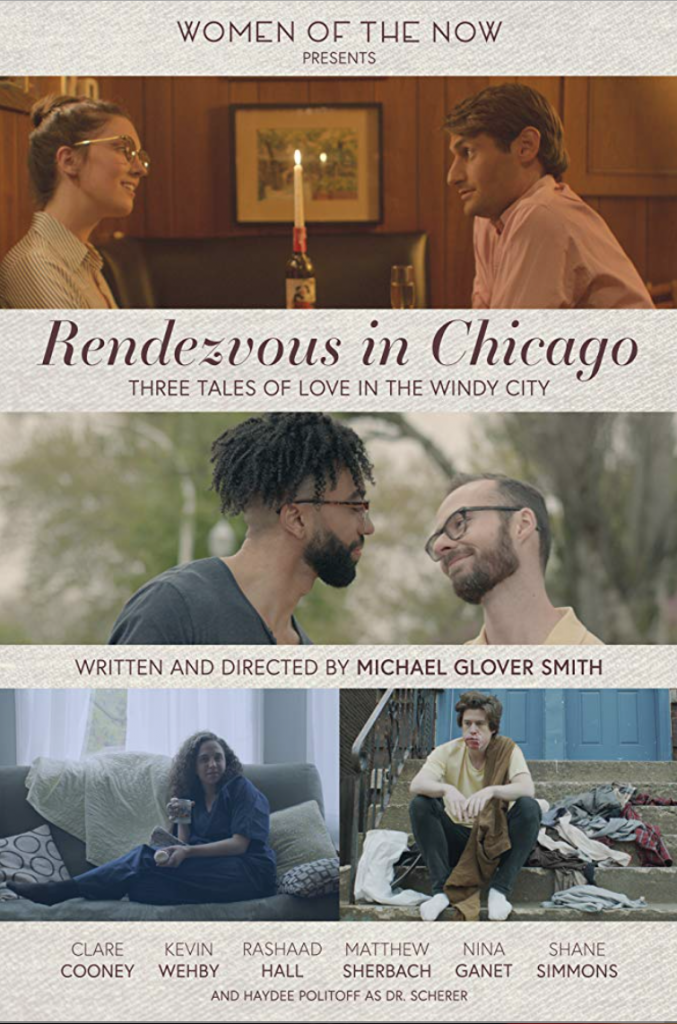 Say what you will about CGI or action scenes, more often than not the most exciting thing in a movie is watching two people chat with each other, and seeing how they react. John Cassavetes knew that. Richard Linklater knows that. And writer/director Michael Glover Smith understands this simple tenet too and mines it for all its worth in his new independent film RENDEZVOUS IN CHICAGO.

It’s a triptych of love stories – a beginning, a middle, and an end – all taking place in the Windy City. Shot on a shoestring with an unknown cast, the film manages to be funnier and say more about relationships than 80% of the rom-com’s that Hollywood has churned out over the past decade. It’s a small, intimate film where the audience is placed up close to its would-be lovers, lovers, and ex-lovers, so much so that we become personally invested in their outcomes.

The first of the trio of stories is entitled “Part One: The Brothers Karamazov.” Dostoevsky’s famous novel about morality is the subject of the dissertation being written by a University of Chicago student named Delaney (Clare Cooney) one evening in a neighborhood bar. She’s old school in her way, writing her thoughts out long-hand on a yellow legal pad. The joint is hardly jumping, and it would seem that’s why the bookish woman chose it, but in the very first scene of the film, she’s warned by her professor to concentrate on her studies and not “f**k up. Is that the genuine reason that Delaney has come to the bar because it’s a setting that could provide more than peace and quiet? Is it because it’s a place that might produce intrigue, danger, and even sex? Damn right, as this spider will soon welcome an errant fly into her sticky web.

That fly comes in the form of aspiring writer Paul (Kevin Wehby). He seems to be another scribe looking for any reason to put off getting down to writing, and sure enough, it isn’t long before he wanders over to the comely student to strike up a conversation. Paul is no match for the slyly smug Delaney, but he tries. He slinks around, acting like he’s cooler than he is, professing to her that the subject of her paper is his favorite book. She doesn’t buy his testimony but remains game in seeing just how well this playa can play.

Delaney proposes the two engage in strip poker right there in the bar. For every Karamazov brother than Paul can name, she’ll remove an item of clothing. For every wrong guess, he must disrobe. You know that Paul’s not going to fare well, but is that part of his overall plan, to lose the battle but win the war? For that matter, is there more to her scheme, perhaps to see how well he jumps through her hoops, or for that matter, looks in the nude? Their looks, hesitations, and tension-filled banter as they dance around each other make for a hilarious and erotic form of foreplay. Editor Eric Marsh shrewdly lets his cuts hang on Paul as he squirms and kvetches, and Wehby holds every shot with aplomb. He turns what could be an irritating character into an adorable goof, and manages to be more attractive the more she, and we, spend time with him.

Cooney is as good as he is, an actress who can say more with staring, lidded eyes than most actresses can with pages of dialogue. If there is a God, she should be a major star. These two are so strong together, Smith could’ve given them his full 90 minutes. (He didn’t…leave ‘em wanting more, I suppose.) Still, it might behoove the filmmaker to bring them back for a future film. This is Paul’s second appearance in a Smith film, as his character appeared in his first feature COOL APOCALYPSE, so there is a precedent. Here’s hoping they do return as they’re simply delicious together.

The second story is entitled “Part 2: Cats and Dogs,” and it features an attractive gay couple dancing around whether they should take their relationship to the next level. During a spring walk, the two men make small talk that’s fraught with deeper meaning, providing a sly commentary on their bond. Andy (Rashaad Hall) is tall, strapping, and wears dreads as painfully hip as his designer glasses. Rob (Matthew Sherbach) is small and tight, suggesting a bit of a nerd in sound and manner, though his painted on shorts indicate a man who’s very far from shy. They are a cute duo, different in a few ways, similar in most. But are they meant to be together for something everlasting?

From the get-go, we know that Rob has something more in mind than a casual schlep to the lake. He’s packing an engagement ring box that couldn’t be any more conspicuous in his pocket than if he wore it on a string around his neck. Still, he’s nervous that Andy may not be on the same page and willing to take their relationship to such a level of commitment. Then, when their chatting turns to pet preferences, Rob starts to worry.

Andy expresses a liking for cats that worries Rob, a self-professed dog person. To drive home the point, Smith’s script coyly finds them encountering a number of neighborhood critters that ups the ante. Yet, despite Rob’s fretting, the real gap exists only in his paranoid mind. He and Andy speak with a similar, gentle lilt, plus, they enjoy the same relaxed expression of sexuality with each other. Heck, they both wear designer glasses. These two are peas in a pod, but advancing into marriage is always a big step, no matter how confident a couple is, no matter whether they’re gay or straight.

Both actors wisely underplay their roles, and their chemistry together has a warm, “lived in” feel. Smith wrote their characters to respond to each other physically too, grabbing a lingering kiss here and there, walk close as they saunter down the street together. It’s a clever and quietly brilliant political comment too that their story takes place in a city as progressive as Chicago. Not every town would welcome such coupling, but as you cheer them on, you cheer on a town like ours for letting their choices live out loud.

We know what’s coming with the last story, the chronicling of the end of a relationship, and indeed, it starts off as ugly as possible. Nurse Julie (Nina Ganet) has come home from her hospital shift to find her boyfriend Wyatt (Shane Simmons) in nude flagrante delicto with another woman. She loses her shit and tosses the two of them out. Her pain still manages to be funny, however, especially when she makes an extravagant point of throwing all of his clothing out the window. (The best and most cinematic shot in the film occurs when Smith applies slow-motion to Wyatt’s shirts pummeling his beleaguered head.)

How this couple came to such a horrid end is only parsed out in crumbs by writer Smith. Wyatt knew she was coming home, so it beggars the question if he wanted to get caught. The other woman (Melanie McNulty) looks to be a saucy blonde, whereas Julie is sans makeup and of mixed race, so was Wyatt consciously seeking another type? Who knows? Smith refuses to answer. He leaves it up to us to fill in the blanks. But make no mistake, however it got there, Julie was caught off guard and she is royally pissed.

Smith isn’t interested in Wyatt’s side of the story. Instead, Alex Halstead’s patient camera stays with Julie as she works out her rage. She burns the sheets, still smelling of fornication, and even starts a wildly verbose monologue as she works through her shock and anger. Then, Smith makes a foray into surrealism as she starts confessing her peccadilloes to the camera, belying all that’s gone on before in the hyper-realistic film. She even flirts with the camera, like we’re to be her new lover. It could be a bawdy audition tape for a dating service, a drunken schpeel, but no matter, it’s a bit of a head-scratcher. Maybe it’s all part of Julie’s need to fill someone in about all her pain, no matter if we in the audience are placed in the position of BFF to confide in.

Ultimately, Julie rises to shimmy and strut away her fury, and Ganet’s fearless performance reaches its zenith. With such moves, Julie’s story touches upon the film’s dancing theme literally and figuratively. The other characters danced around new beginnings with each other while she dances away from her past. It’s pretty cheeky.

RENDEZVOUS IN CHICAGO appears deceptively small, with precious little camera movement, nary a set piece, and no supporting characters of importance other than a funny bartender in the first chapter. Dave McNulty does provide a fascinating barkeep, one both playful and a little sinister. (David Lynch and Stanley Kubrick would’ve loved his inclusion.) Other than the constant presence of composer Jason Coffman’s sexy electronica score, itself both playful and a little sinister, this is stripped down bare-essence filmmaking. But when you have fascinating characters saying clever things in the name of love, what more do you need? Humanity is still the most fascinating and entertaining game in town. Smith knows that and asks us to join in the conversation. 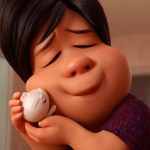 THE TERRIFIC BATCH OF 2019 ANIMATED SHORT FILMS ARE FILLED WITH PATHOS AND PARENTINGnon-illustrated, Review 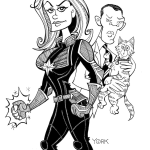