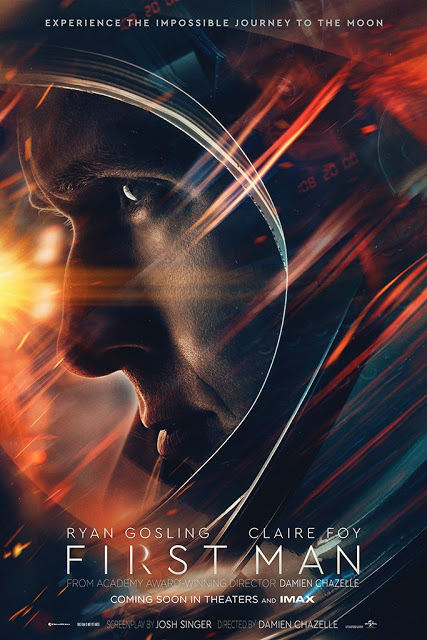 Damien Chazelle’s new feature FIRST MAN is an ode to elbow grease. Telling of the painstaking years it took for NASA to put a man on the moon, it is less about the glorious conquering of space and more about the tireless work involved in making it happen. Specifically, it focuses on astronaut Neil Armstrong (Ryan Gosling) and his stoic patience and stubbornness while pursuing the goal. At times, the film is less about reaching for the stars and more about making it through the day and whatever cockamamie test NASA put Armstrong and his fellow pilots through. Their journey is terrifying, harrowing, and thrilling – and that’s all before Armstrong leaves earth’s orbit and sets his foot on the moon.

Watching these military-trained men continually put their lives at risk in these flying sardine cans never ceases to astound as you watch FIRST MAN. The astronauts get strapped into modules that appear to be little more than rickety buckets of bolts; vehicles so suspect that they wouldn’t pass muster at a disreputable carnival midway. In the very first scene, Armstrong is shown trying to control his airplane as it breaks through the earth’s atmosphere layer, starts to return home, then surges upwards again. His cockpit shakes like he’s a paint can being mixed in a hardware store. We in the audience are completely on edge with him. From there, we never really can trust what NASA makes him do as they seem to be flying by the seat of their pants as much as he is.

Chazelle’s approach in this kind of storytelling does two things: first, it puts us right next to Armstrong and makes us feel all the terror, nausea, and occasional euphoria that he feels. Two, it adds dimension to a story that has for too long now been taken over by mythology. We tend to regard what Armstrong et al. did as utterly glamorous. This film, more often than not, paints a picture that is a million miles away from that. Much of what they’re doing even seems foolish. How many times can we watch Armstrong vomit, get burned, and nearly crash before we start to wonder if he had a death wish? Yet, because Armstrong remains calm throughout his journey and approaches each day as if it’s an issue of problem-solving, he continues to impress NASA and those of us in the audience. It’s less about heroism and more about perseverance. 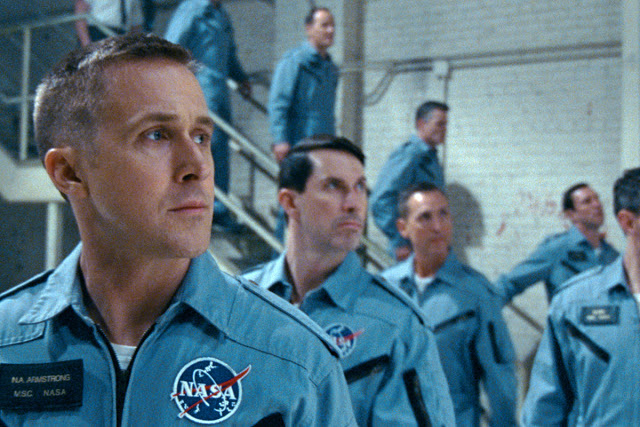 Armstrong’s unflagging and eyes-on-the-prize disposition benefited from his years as a soldier. He dealt with rigid structure, following orders, and dealing with catastrophe in his years as a Navy pilot. Chazelle doesn’t show that backstory, but it’s there in every move Armstrong makes.  The pilot also lived through catastrophe, like when he was shot down while piloting a Grumman F9F Panther and forced to bail out mid-air. It prepared Armstrong for the experience of failing and floundering in the NASA program, turning the work into just another trying day at the office.

The same was true as well for most of the other pilots and ex-enlisted men that NASA employed in their decade-long attempt to conquer the moon. The up’s and down’s, literally and figuratively, were all part of the vocation. The same, however, could not be said for the wives and family members of these pilots. They had to sit on the sidelines and try to understand what was going on, often with little information from their macho and monosyllabic husbands. Chazelle shrewdly puts us in their shoes too through the critical supporting performance of Claire Foy as Janet, Armstrong’s long-suffering wife.

Foy has always used silences, and her huge eyes and jutting jaw to convey everything going on in her head. In her award-winning performance as Queen Elizabeth in THE CROWN, she made silent suffering into art. Here too Foy must dutifully sit by and watch the patriarchy make a mockery of humanity and family, asking people like Janet to go along with every risk of life and limb in her husband’s work. No wonder Chazelle shows her lighting up cigarettes so often in the film. It not only calms her but becomes the raging fire that she cannot express within the confines of that world.

At times, this movie plays as scary as most horror films. Yes, we know that Armstrong will make it up to the moon, but Chazelle and the script by Josh Singer, based on James R. Hansen’s book, do their damnedest to keep that end result in question. When Armstrong’s buddy Ed White (Jason Clarke), and his fellow astronauts Gus Grissom (Shea Wigham) and Roger Chaffee (Cory Michael Smith) perish while sitting in the cockpit waiting for Apollo 1 to launch, it creates Herculean doubt. Watching these men trying to gasp oxygen in their claustrophobic capsule and then panic when a fire breaks out is a more terrifying few seconds than the last hour of HEREDITARY. Often, history has glossed over the reality of how these men died. Chazelle’s take is more honest, making the work of these men all the more courageous and perhaps insane.

Chazelle and Singer punctuate the needless deaths of these three men with Armstrong’s reaction as he is given the news via phone while trying to shore up support for the space program at a White House mixer. Armstrong is hardly a salesman and considers it more painful than any of his crashes. Then he gets the news of the Apollo 1 fire, and it puts his pain in perspective. Again, Armstrong is too much of the good soldier to break down, and Chazelle emphasizes that by hanging on Gosling’s shocked expression for a long time. Only when Armstrong realizes that he’s bleeding from the broken cocktail glass he crushed in his hand, do we understand that he, like his wife, cannot truly ever let it all out.

Gosling does some of the best acting in his career here, using his sullen expressions and staring eyes to suggest a man who is never happy but always focused. His Armstrong is a man doing the work, fulfilling his job requirements, at times akin to a math student returning to a chalkboard again and again to solve a flabbergasting equation. The fame, the glory, the parades…none of that mattered to Armstrong. His work was a vocation and a calling, and as President Kennedy exclaimed, you travel into space for the same reason you climb a mountain – because it’s there.

Still, when all the elements finally come together to land Armstrong on the moon, and he takes that first look out onto the vast plain of the planet, it is glorious. Chazelle introduces the vista in silence, letting cinematographer Linus Sandgren’s framing of the enormous lunar surface do all the work. It’s impressive without any underscore. Much of the final half hour occurs with little on the soundtrack other than Armstrong’s breathing. Sometimes Chazelle eliminates that noise too and lets the scenes of wonder play out wordlessly, taking one’s breath away in every sense of the phrase. 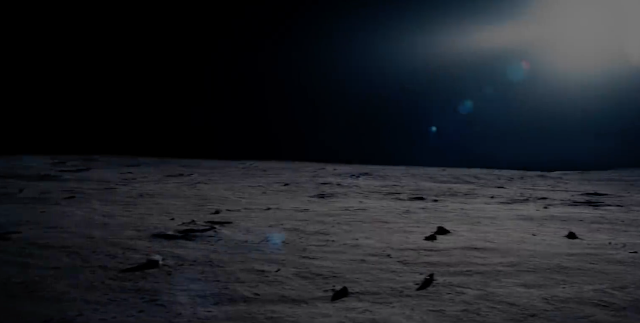 Justin Hurwitz’s score, when it does fill the track, is superb. The composer introduces the harp as a solo instrument early on, and it not only enhances the film’s intimacy but becomes a cheeky commentary on the angels clearly on Armstrong’s shoulders keeping him from ruin. All of the production values are exquisite as you’d expect in a Chazelle film, and yet despite all of the 1960’s period trappings, this film never becomes a fashion show. If anything, such attributes are immaterial. This film stays tightly focused on Armstrong, keeping next to him as if the lens were an appendage. That’s important since he’s not a verbally expressive man. The intimacy of the camera more often than not becomes his interpreter as his words seldom state what he’s feeling.

Chazelle is an incredibly talented filmmaker, a magician who conjures characters and context without ever repeating a trick he’s employed before. This film has a grainy look, suggesting the earthiness and grit in these ventures versus the bright, colorful visages he used in LA LA LAND to convey the dreams of artists in the land of make-believe. The one thread that connects those two films with WHIPLASH, his breakthrough film from 2014, is respect for the sacrifice inherent in doing a job and doing it well. Drummer Andrew bled for his music in WHIPLASH. Mia and Sebastian gave up their relationship to pursue their entertainment industry dreams in LA LA LAND. And here, Armstrong and all those connected with the space program sacrificed their time, some sanity, and sometimes even their lives to conquer space. 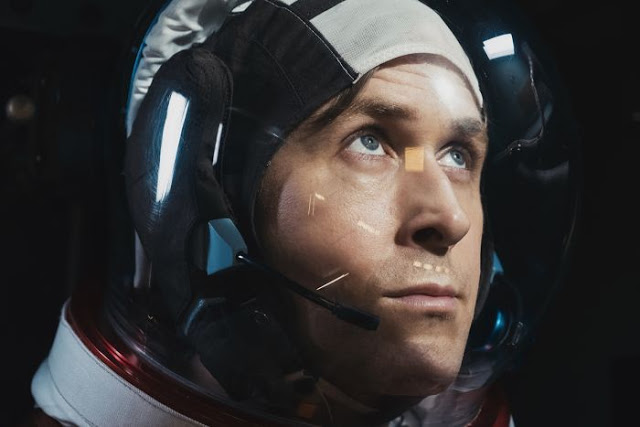 Argue if you want about whether any dreams are worth such risks and losses, but the admiration for those who give it their all cannot be disputed. Nor can the compelling way that Chazelle et al. have told their story here. FIRST MAN soars as much when it’s staying grounded as it does when Armstrong and the dreams of the nation finally reach that far-off star. 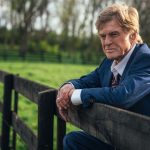 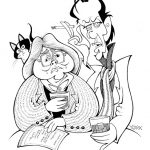 “CAN YOU EVER FORGIVE ME?” PROBES THE ISSUES OF ART AND ACCEPTANCEillustrated, Review