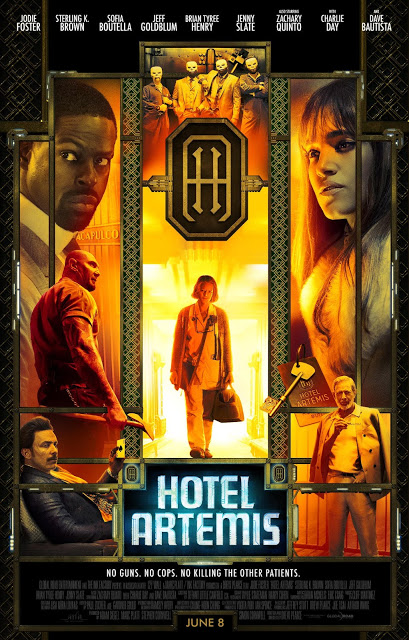 The new thriller HOTEL ARTEMIS is a fun, frothy, and assuredly made B-movie with an A-list cast. It’s not a lot more than that, but as diversionary entertainment, Hollywood could do a lot worse. (And often does.) Its most marked characteristic is that Jodie Foster is the star, returning to the big screen after a five-year absence. One wishes that she might’ve returned in something more highbrow, a bit worthier of her accomplished resume, but at least she’s having fun in this pulpy concoction.

HOTEL ARTEMIS starts with a bang as a 2028 Los Angeles is under siege. It seems that the megalomaniac corporation that owns the city’s waterworks has decided to cut off the water supply to the public to control the violence and lawlessness that has run amuck. Now, the City of Angels is experiencing riots, and the streets look like a Third World hell. Even worse, the hordes are looting, and the chaos is bringing out the underworld in full force.

Chief among them, for story purposes, are a group of bank robbers led by brothers (Sterling K. Brown and Brian Tyree Henry). They’ve hoisted a ton of loot and some errant diamonds they didn’t expect in their haul, but when the gang is ambushed by riot police, the two brothers get shot and require immediate medical attention. They head over to the Hotel Artemis, the secret hideout for criminals that caters to their every wanton need. At the Artemis, they can check in, lay low, and even receive emergency surgery.

Running the run-down, art-deco hotel is a character known only as “The Nurse” (Foster). She wears many hats there, checking the criminals in, catering to their room service needs, and yes, nursing their wounds. She also strictly enforces the rules, including the first one that states all weapons must be checked at the door. Of course, rules are meant to be broken, and it won’t be long before almost every one of her ten commandments is in ruin as much as the hotel’s wallpaper.

One of the fun conceits of the movie is that despite the rooms all being dilapidated to a fault, they nonetheless contain all the modern amenities needed to cater to the killer clientele. Holographic phones, state-of-the-art gizmos, heat-sensor tags – they’re as prevalent there as the old-fashioned, turn-key doors. It’s very much a mix of the old and new, as every dystopian future must be since Ridley Scott created his visionary BLADE RUNNER in 1982.

Even the tools that the Nurse employs to bring the badasses back to life are ultra-mod, including laser scalpels, fully-functional operating room accouterment, and other fancy do-dads to patch everyone up. Helping out with some of the care is a hulking Nurse’s aide (Dave Bautista) called Everest. He also serves as the hotel’s muscle when some of the vermin start rattling in their cages. Inexplicably, for a hotel that bans weapons, there are also machines on the premise that can create instant graphite firearms.

It doesn’t make much sense that such a rule-laden hotel would have those kinds of machines available to guests, but then writer/director Drew Pearce’s script isn’t all that interested in logic. His screenplay intends to be ‘too cool for school,’ giving his film Tarantino-type savvy at every turn, as in the way his criminals are assigned the names of their hotel rooms, which all happen to be vacation destinations. Brown is called Waikiki, Boutella gets the French moniker Nice, etc.

It all plays like second-hand Tarantino, or even Elmore Leonard, with a whole helluva lot of JOHN WICK thrown in too. (Name-dropping that Keanu Reeves franchise must have helped greenlight this one.) What Pearce should have spent more time on was pushing to the forefront more of his own original thinking. His concept of a business-run government denying essential human rights could’ve helped all this play as a much more savage social satire, but he seems more interested in exploring the action/adventure elements of this saga.

Unfortunately, those action scenes are merely serviceable and not particularly inspired. The biggest set-piece gives Boutella a chance to strut her stuff, but it misses being genuinely memorable by being so blanded written and staged. In the ho-hum scene, her assassin takes out a batch of bad guys in a tight hallway, armed with only a stash of the Nurse’s scalpels. She tosses the blades around but finds no imaginative way to slice and dice with them. They might as well be Ninja stars for how boringly they’re employed.

Just like those scalpels, the film fails to cut through in more meaningful ways as well. Jeff Goldblum’s droll arrival late in the picture as the crime kingpin should’ve been chock full of possibilities, but then he’s given very little to do in his time onscreen. More talent is wasted, including both Zachary Quinto and Jenny Slate in their supporting roles as well. Quinto is given only one emotion to play – rage, and comedic treasure Slate isn’t handed one quirky line to utter.

Even worse, Pearce strains to create pathos throughout. The Nurse tears up thinking about her deceased son continually, and Brown’s baddie bitterly talks of what might have been if he wasn’t burdened by his ne’er-do-well brother. Pulp like this doesn’t need maudlin excesses; it needs snap, crackle, and pop. But even though a ton of the cast ends up shot, beat up, or killed, most of the violence is shockingly tame. Only Charlie Day’s motor-mouth criminal meets a truly gruesome and fitting fate.

In its favor, the movie does move fast, and the production design by Ramsey Avery is exceptionally gritty. Foster is made up to look like an old lady, and she does create a quirky, eccentric biddy.  Still, Pearce needed to give her more to do and say that was truly memorable. Having her repeat the line “It’s just another Wednesday” again and again doesn’t cut it. As Regina George said about the term fetch in MEAN GIRLS, “It’s not going to happen.”

If HOTEL ARTEMIS had a script as impressive as its cast, this could’ve been a genuine sleeper and worthy of becoming a franchise. Instead, it’s most likely to become a popular VOD rental down the road. This one could’ve been five stars if it tried harder, but suffice it to say, better nights out await elsewhere. 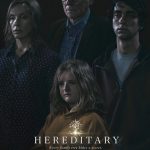 “HEREDITARY” IS UNSETTLING HORROR THAT STRUGGLES TO SETTLE ON AN ENDINGnon-illustrated, Review 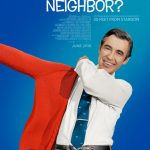 “WON’T YOU BE MY NEIGHBOR?” SHOWCASES THE POWER AND POLITICS OF FRED ROGERSnon-illustrated, Review