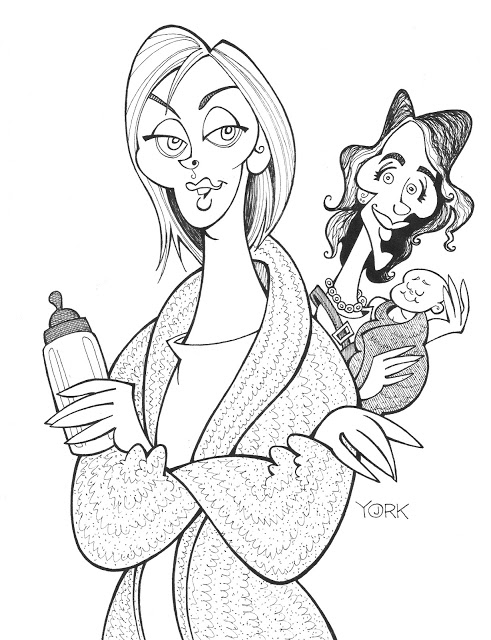 Original caricature of Charlize Theron and Mackenzie Davis in TULLY

It’s very early in the year, but the Oscars very likely have their first Best Actress nominee. Charlize Theron gives such a commanding, blistering, and raw performance in the new dramedy “Tully” that the Academy would be fools to ignore it. The rest of the film is almost as strong as she is but make no mistake this is one complex and affecting film about motherhood. Directed by Jason Reitman, it’s the third film he’s made with screenwriter Diablo Cody after “Juno” and “Young Adult”, and it’s clearly a sublime partnership. Their latest triumph explores the overwhelming job that motherhood is and showcases all sides of it, from the hilarious to the harrowing to the heartbreaking.

Theron plays Marlo, a New York suburban mom with two kids who’s about to give birth to a third. She’s already struggling mightily to hold it all together. Every day there’s more to do, less time to do it in, and the ginormous stress starts eating at her soon as her swollen feet hit the floor. It doesn’t help that her husband Drew (Ron Livingston) is of the old school variety, the kind of man who thinks he doesn’t have to do much around the house because he’s the breadwinner. That means most of the cooking, cleaning, and caring for the kids falls on Marlo’s shoulders. And it’s wearing her down, mind, body, and soul.

Marlo is at her emotional rope’s end because of it, and she’s always on the verge. Theron’s performance walks that razor’s edge, showing every frustration, each harried moment, and all the fatigue dragging down her character. Marlo is also a physical wreck, a woman who doesn’t get enough sleep and is chronically fatigued. She shuffles around in sweatpants and baggy sweaters as the house gets dirtier, the kids get noisier, and her husband gets lazier. She’s about to give life to a new baby, and yet her own life force is slowly draining out of her altogether.

Complicating matters further is the fact that son Jonah (Asher Miles Fallica) is one handful and a half. He’s got emotional issues and may even be autistic. Marlo doesn’t know what to do about all his erratic behavior. Instead, she tolerates his kicking of the back of her seat while driving until she explodes at him. She also lets him scream at all of life’s petty irritations, but barely can summon the strength to soothe him. Marlo and Drew describe their boy as “quirky,” but he’s got real problems. He’s disrupting school as well as their lives on a daily basis.

Everything becomes a battle for Marlo – keeping Jonah in school, putting a meal on the table, finding time to bathe, even getting her husband to talk to her. He shuts her out at night, retreating to the bedroom to play video games with headphones on. Drew’s brother Craig (Mark Duplass) only adds to her consternation. Craig and his wife are wealthy, over-achievers who can’t help but look down at Marlo’s messy mothering. She always seems just one step away from having a total meltdown, and Theron lets her character’s eyes hint at the traces of madness seeping through the fatigue.

Then her world changes after she gives birth to her third child. Craig generously pays for a nanny to come by each evening to help her out and it is a godsend. The 26-year-old nanny’s name is Tully (played by Mackenzie Davis of “Halt and Catch Fire” fame), and she’s a free spirit, albeit one with a serious work ethic. Tully instantly takes over the house, manages Marlo’s baby effortlessly, and starts taking care of mom too. Not only does she give her the precious “alone time” she desperately needs and craves, but Tully ends up becoming a sort of therapist to her, along with a best friend, muse, and a regular shoulder to cry on.

Tully seems too good to be true when she quickly organizes the home, cleans it from top to bottom, and finds a place for all the errant toys as well. She even makes cupcakes for Marlo to take to Jonah’s school as a peace offering. Ultimately, Tully becomes the ‘spouse’ Marlo really needs, and they even have a simpatico banter together, quipping back and forth in sharp, pithy dialogue the way only Cody can write for her characters.

In Tully, Marlo starts to see the kind of caretaker she wants to be, and their bond becomes what keeps her going. As much as Tully turns into a super nanny, the real job she does is help return Marlo to a functioning, whole person. With the aid of Tully, Marlo learns to love her life again, live and let live each day, and kick the postpartum depression to the curb.

The movie struggles some in its third act, as everything is percolating, and Tully helps Marlo even bring Drew around to becoming a more active husband and father. The drama starts to wane until a shocking, out-of-left-field rug-pull occurs towards the very end that may leave audiences feeling a bit stymied. Still, the whole of this film is a smart and involving study of American motherhood, and it’s great that the story never tries to turn the two women against each other. That Hollywood cliché may have helped launch a number of thrillers and Lifetime movies, but it has no place here. This film is far more feminist and humanist.

Cody’s writing and Reitman’s direction ensure that all the characters are vivid, and the performers excel. And in Theron, they have one of the best actresses in the world working at the top of her game here. Marlo is right up there with Theron’s best work, like that of Mavis Gary in “Young Adult,” Aileen Wuornos in “Monster,” and Imperator Furiosa in “Mad Max: Fury Road.” And it sets the bar very, very high for any other actresses hoping to figure in film awards competition this year. 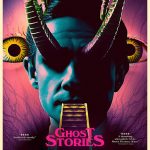 “GHOST STORIES” IS AN AMBITIOUS ANTHOLOGY OF GHOSTS AND THAT WHICH HAUNTS USnon-illustrated, Review 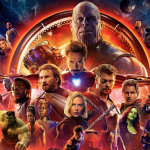