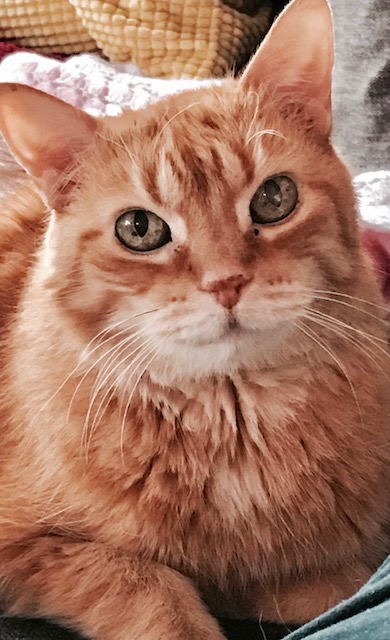 The last time I wrote about something other than movies or television here at The Establishing Shot was when my cat Smokey Joe died from stomach cancer on December 30, 2015. I wrote a tribute to him then, declaring that technically I was still writing about entertainment because he was such an amusing pet for 13 years. Today, I am writing another eulogy for my other cat, Agent Orange, who passed away today after a long battle with kidney disease. He was a part of my life for over 15 years, and during that time he was my best bud and number one companion. And he too was as entertaining as any pet could be.

He came into my world when I was dating flight attendant Paige Carpenter. She would eventually become my wife, but before she moved in, Agent Orange did. He had been living with her dad David back in Madison after his original family rehomed him. They weren’t very good to him, hadn’t even given him a name, didn’t believe in keeping animals in the house so he would come to David’s house seeking shelter from inclement weather and a bite to eat. He was referred to by David, his wife, and Paige as “that orange cat,” then eventually addressed him as Agent Orange. An ironic name, as he never defoliated anything and wasn’t the least bit caustic.

Agent Orange’s original owners eventually asked David if he wanted to make the cat his own. David took him in, but he already had a cat named Chloe to look after, and Chloe wasn’t too keen on sharing her home with another feline. That’s when Paige met me. When she told me of his plight, I suggested that she bring the orange tabby down to Chicago to live with me. I was a recent divorcee, my ex-wife had gotten custody of our beloved cat, and I missed sharing my life with a feline friend. So, she brought Agent Orange to my apartment down from Madison one weekend to see if we’d hit it off. Did we ever, it was love at first sight for the both of us! 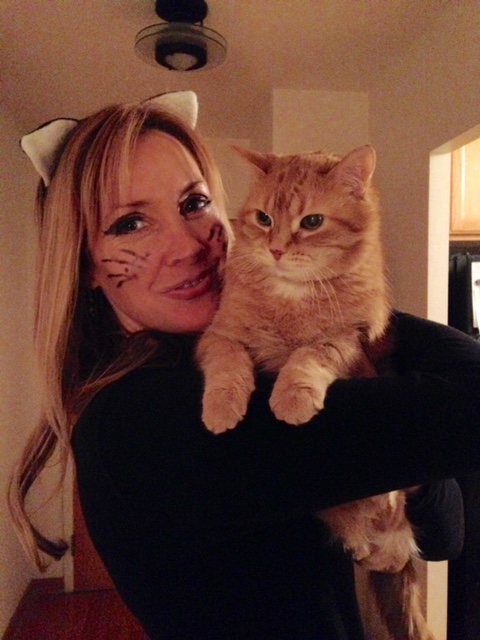 Two cats in my apartment for Halloween…the one on the left is Paige.

Despite Paige giving him the name Agent Orange, a cheeky joke if there ever was one, this orange kitty was anything but destructive. He immediately struck me as being the sweetest little guy. He walked right over and engaged with me, meowing his hello’s. Then throughout the weekend he was avidly interested in all that was going on in the apartment, from the breakfast I was making to the laundry I was doing to the caricatures I was cartooning. He talked to me, always looked me in the eye, and wanted to be by my side no matter what I was doing. Naturally, he slept on the bed with me from the start too and regularly woke me up in the morning for some AM nuzzling.

We were thick as thieves for those months before Paige moved in. And when she made our family a trio, we all got along so well that you’d think he was our child. Pets are often anointed as “fur babies,” and Agent Orange was our pride and joy. Not too long after that, Smokey Joe joined the family, and he was immediately smitten with the Agent as well. They were now brothers and would quickly become best friends too.

Smokey Joe was in many ways the opposite of Agent Orange. He was mischievous, droll and tentative around strangers. His disposition only enhanced the warm vibes Agent Orange gave in contrast to any and everyone who came into contact with our family of four. Agent Orange loved visitors and always came up to greet whoever came through the door. Smokey Joe would be affectionate if he deemed them worthy of attention. Often, friends and guests wouldn’t see all that much of Smokey Joe as he frequently stayed away from strangers, unsure if he wanted to participate. But they saw a lot of Agent Orange. He was always up for being sociable. 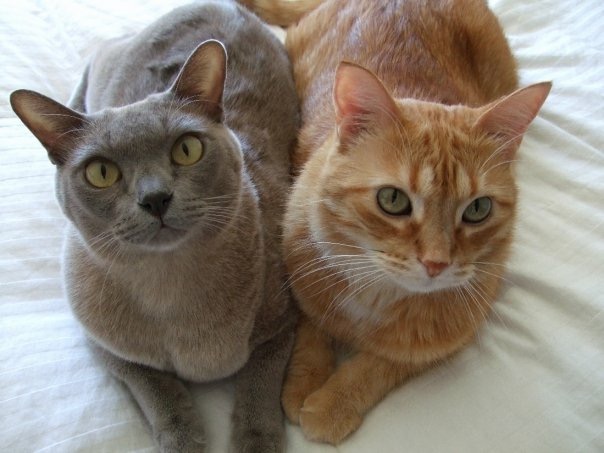 Smokey Joe and Agent Orange, at each other’s side through thick and thin.

He loved people and enjoyed being petted by any and all hands. The Agent loved sitting on the couch and being part of the conversation with us and everyone who came by. And if we were in the kitchen making food, Agent Orange just had to be a part of it. He was likely hoping for a few nibbles of human food too, but we were careful to not indulge him with a diet that didn’t suit his situation. Still, it was just one of the many behaviors of his that became routine and a big part of our daily existence.

We had to be careful with what Agent Orange ate as he had some minor health issues from the get-go. Because he had been an outdoor cat with his first family, he had developed an upper respiratory infection and had diminished lung capacity. He tended to have GI issues too. He was generally very healthy, but we always worried about how long he’d be with us. One of the things that made Smokey Joe’s death so shocking was that he had no health issues before his cancer showed up. We always worried that Agent Orange would go first, but alas, fate had a different pecking order.

Even after losing his brother in the short two months it took that nasty stomach tumor to claim Smokey Joe, Agent Orange remained the most positive and good-natured of pets. He missed his brother but didn’t let it shunt the remaining years he had left. He was always exceedingly friendly to us and everyone. Always engaged, always purring, always happy to eat. And his enthusiasm for life was a constant inspiration to both my wife and me. 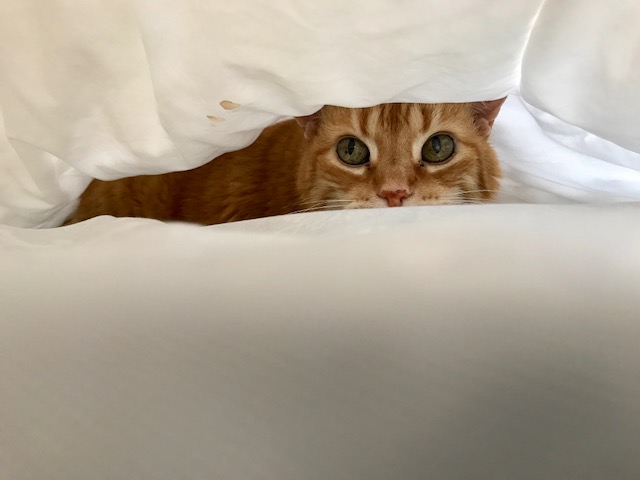 Agent Orange playing “Hide & Seek” with us under the covers while we made the bed.

ge participated so thoroughly in everything and with such joy for all the 15 years he was a part of our daily lives. He loved watching the handyman fix the sink and sitting on the couch enjoying “Seinfeld” reruns with us. Our cat especially liked playing ‘Hide & Seek” with us throughout the apartment. He also loved to trek down the hallway during our walks to the garbage chute. And it was a real treat for him to be picked up and given a tour of the world five feet above his normal eye level. Every time we’d come home, he’d come running to the door. And if he thought we were taking too long to awaken on a weekend and enjoy the morning with him, he’d bat at our noses with the relentlessness of a boxer working the bag in a gym.

In the last year, he became even more entertaining as he started to become a merry prankster.  Agent Orange loved to steal my place on the couch whenever I’d get up, but he wouldn’t do so until I was looking. It was almost like he was saying, “Hey bub, you didn’t want to sit here anymore, did ya’?” It made Paige and me laugh every time. Even when his health started to fail in the past months, he would still steal my seat. It never got old.

I slept a lot on that sofa the past weeks as his health declined rapidly. After a visit to the vet on Monday of last week, she told us that his advanced age (estimated at 19 years) and his weak kidneys were getting the best of him. He wasn’t eating and needed to be on fluids. There was little we could do but keep him as comfortable and hydrated as we could. Paige and I wanted to be near him while he slept, and he usually split his time between the bed and his bean bag chair in the living room. Thus, Paige took the bed, and I claimed the sofa in case he needed us during the night. 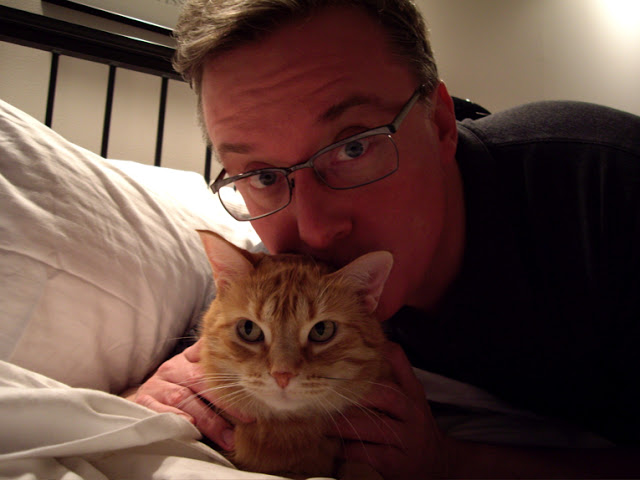 The Agent snuggling with yours truly.

While on the couch all those nights, Agent Orange would come over for a nocturnal visit. I’d pick him up, and we’d cuddle for 20 minutes or so, stroking his back to make him feel safe. This last Sunday evening, when he joined me on the couch, things were different. This time he faced me and kept eye contact with me the whole time. It was almost like he wanted to remember my face, and for me to see his before he had to say goodbye.

Today, with the help of a loving veterinarian who makes house calls from a company called Lap of Love, we gently ended Agent Orange’s suffering. Yet even on his last day, he got up out of his bean bag to go over and greet her when she arrived. He walked with great difficulty, but that wasn’t going to stop him from being the head of the welcome wagon. In his last moments, as he quietly went to sleep, our beloved boy gazed upon Paige and me with love still in his eyes.

I’ve never met a soul as sweet as his. He was loving and friendly and always present, even in those final moments. Now, he’s in heaven with Smokey Joe and the many other cats and human friends who passed before him. My wife and I have holes in our hearts that can never be filled, but he was our precious boy for 15 years. Every single day with him was a gift. 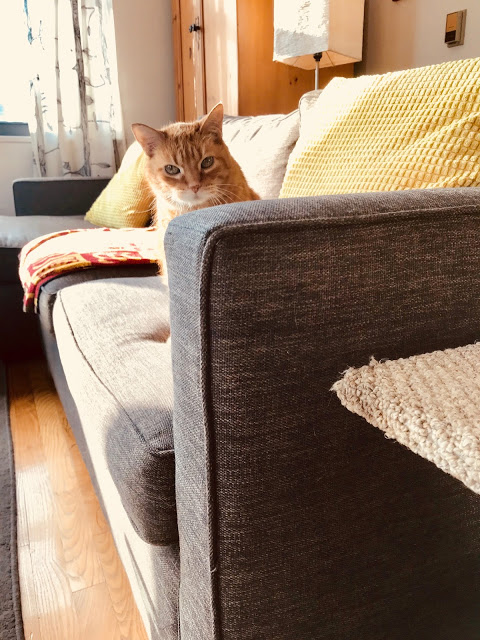 Agent Orange, stealing my seat on the couch.

Paige and I often laughed about the fact that we’d say “I love Agent Orange so much” as those words had probably never been uttered before by anyone else. If you heard such a statement at face value, you’d likely grimace and wonder how anyone could love such a weapon of mass destruction. But if you knew Agent Orange the cat, you’d not only understand the sentiment, but you’d agree wholeheartedly. He was just that kind of guy that summoned such affection. 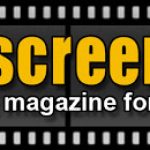 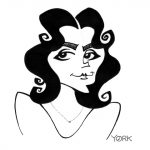