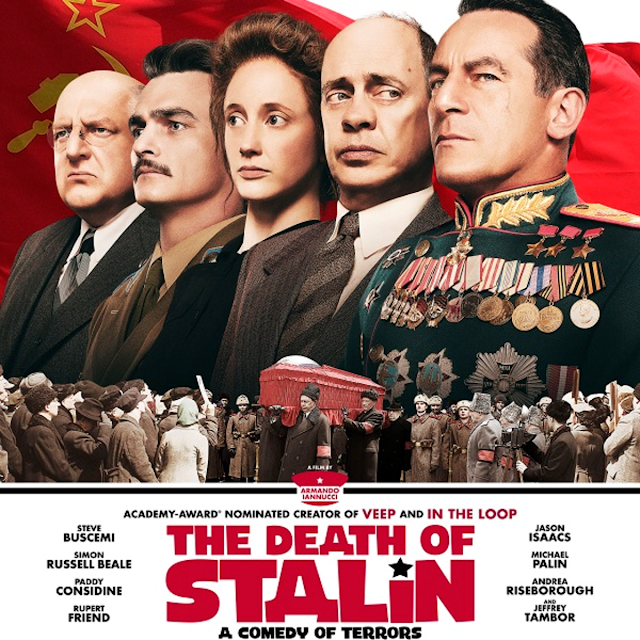 How absurd is our current political climate these days? So ridiculous that a porn star pay-off feels like just another day at the Oval Office? Increasingly crazy, enough so that the HBO comedy series VEEP now plays like a documentary? Risible to the point that watching cable news is almost sadomasochistic? Well, if so…boy, have I got a movie for you! It’s called THE DEATH OF STALIN, and indeed, it concerns the death of the most murderous dictator in the 20th Century. It’s not played as drama, however, but as a farce. And its resemblance to the insanity in our own nation’s capital these days is intentional and renders the material all the more provocative. Just watch and tell me this doesn’t suggest a cautionary tale.

After the brilliant UK comedy writer/director Armando Iannucci hit pay dirt in 2005 with his political spoof THE THICK OF IT for the BBC, and his comedy film hit IN THE LOOP four years later, he turned his lens to the White House and created the award-winning VEEP for HBO in 2012. He recognized that modern politics had moved to just this side of farce, so he dialed up the absurdity of his tale a touch and created these contemporary takes on the crazy quests for power in the 21st century. After the preposterousness of the 2016 political campaign in the USA, VEEP struggled a bit to keep up. The pettiness, stupidity, and craven ambitions that Iannucci and his writers wrote for President Selina Meyer (Julia Louis-Dreyfus) almost paled in comparison to the daily crassness of Donald J. Trump. So, where to go from there? How could Iannucci still make hay out of modern politics and ensure our laughter?

The answer, it turns out, was to look to history, specifically Russia of 1953, and to treat it as almost a political version of A MAD, MAD, MAD, MAD WORLD. In THE DEATH OF STALIN, the only grave part is the title. The rest, with the story concerning Stalin’s warring cabinet chasing power in his aftermath, is played as the darkest of black comedy. And it is one of the absolute best of its kind in the history of film.

As THE DEATH OF STALIN starts, a “Radio Moscow” broadcast of a Mozart concert is finishing going out across the airwaves. Then Joseph Stalin (Adrian McLoughlin) orders a recording of it, but the producers panic as they failed to tape the performance. The station manager Andreyev (played as a quivering bundle of nerves by Paddy Considine) thinks quickly, if not rashly, and brings back all the musicians, and some of the audience to listen to it all over again while it’s being recorded for the dictator.

Knowing full well that the irrational leader could have him killed if he doesn’t deliver, Andreyev pulls off the miraculous. The disc is made and sent off to Stalin, albeit with a stinging note inside the sleeve, courtesy of strident activist and concert pianist Maria Yudina (Olga Kurylenko). Her note savages the fearless leader and his killing of over 20 million political enemies and ‘undesirables.’  The scribbles have their intended effect and sting Stalin. He then suffers a cerebral hemorrhage and falls to his office floor. In the wee hours of the AM, he will finally be discovered, but as he lies comatose, there is little anyone can do to bring him back to life.

From there, all of the “king’s men” spring into action, selfishly maneuvering for power, blatantly trying to usurp competitors, and lying through their rotting, vodka-stained teeth to anyone in shouting distance to keep in the quest for power. The body isn’t even cold yet as these loyal supporters clomping about it, metaphorically and physically, jockeying for power.

Amongst the cretins are real Russian political hacks, rendered here as comic characters. Director Iannucci, his fellow writers David Schneider, Ian Martin, and Peter Fellows (basing their screenplay off of the French graphic novel of the same name by Fabien Nury and Thierry Robin), and a sterling cast of farceurs bring all of the terrible men to hilarious life. Chief among the exquisitely manic cast are Steve Buscemi as a flustered Nikita Khrushchev, Simon Russell Beale as the ruthless NKVD head Laventiy Beria, Jeffrey Tambor as the limp noodle of a Deputy General Secretary Georgy Malenkov, and Michael Palin as the stodgy Foreign Minister Vyacheslav Molotov.

Each of them is presented as a scheming shit, devious in every way as they barely wait for Stalin to kick the bucket before claiming dibs on his power. Amongst the outrageous acts perpetrated by the cabinet are the stealing of files, looting the coffers, shooting witnesses, threatening soldiers, and conning Stalin’s troubled children to use them to their advantage. Vasily (Rubert Friend) and Svetlana (Andrea Riseborough) add even more to the mess as Stalin’s son is little more than a drunken fool, and his daughter is a nervous Nellie whose paranoia is as unattractive as her rat’s nest hair.

The rest of the film chronicles the ups and downs of each of the players as they struggle for dominance, and the hysterical contortions each of these old men will go through to prevail. Based on the actual events, Iannucci pushes the history to comical lengths to underline how insane it all was. Still, such machinations don’t seem as out of bounds today given the daily clown show of American politics these past few years.

THE DEATH OF STALIN plays like a scathing editorial about our political system as well as the current POTUS and his absurd cabinet. Even the Russian angle seems almost too on-the-nose appropriate given what we know about all of their meddlings in our elections and their hold on our Commander-in-Chief. It’s both pants-wettingly funny, but more than a little chilling too.

One expects expert comic actors like Buscemi, Tambor, and Palin to thrive in material like this, but who knew that Friend and Riseborough could be so hilarious? (Friend couldn’t be farther here from his somber role on Showtime’s HOMELAND for all those seasons.) Riseborough has proven to be one of the best young actresses working today, and once again she demonstrates an ability to play anything asked of her, be it drama, romance, or farce. Hers is also a vanity-free performance as the beleaguered Svetlana is nothing if not a hag. But then everyone here looks unattractive with their ridiculous facial hair, unflattering Soviet uniforms, or ill-fitting suits. Such dress makes all the clowns appear even more ludicrous.

Everyone plays it reasonably straight, even Jason Isaacs, who truly excels as a farceur in his role here as a flabbergasted general. No one attempts to speak in a thick Russian accent either. Instead, they talk in their normal voices. It makes for purer performances and adds a contemporary quality to these shenanigans. If anything, Iannucci and his writers go out of their way to add more contemporary touches to the material, all the better to remind us of the parallels to our modern world. Chest bumps, overt cursing, and contemporary euphemisms are sprinkled throughout as well. Such an approach makes for one incredibly contemporary period piece.

Black comedy is a hard sell for Hollywood, and we shall see if such edgy material as this can reach the audience it rightfully deserves. For those who love VEEP, and can’t get enough of MSNBC or CNN, this is required viewing at the Cineplex. It may be cringe-worthy at times, what with its propensity for showing the Soviet world of violence, torture, and bloodletting, but for those who like their parables to be challenging and salty, do not miss this exceptional film. 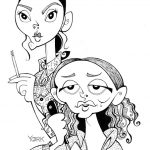 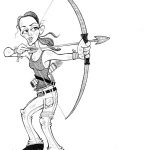 THE NEW “TOMB RAIDER” FEELS OLD, BUT HAS A FRESH AND GAME LEAD LARA IN ALICIA VIKANDERillustrated, Review