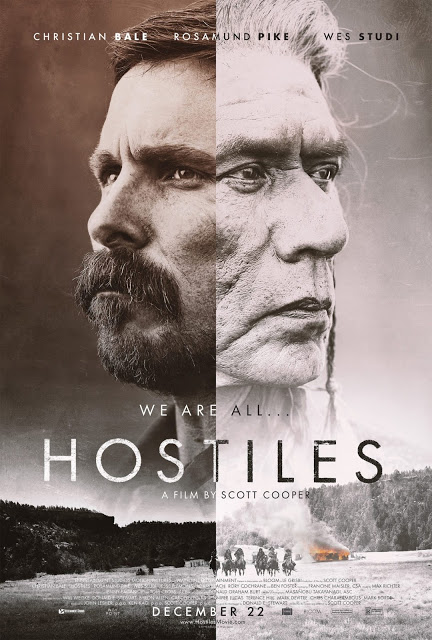 HOSTILES, just opening in Chicago today, is the last of the mainstream Oscar contenders. Written and directed by Scott Cooper (CRAZY HEART, BLACK MASS), it’s a prestige western, revisionist in its take on the hostility between the American army andthe American Indian of 1892. No one in this film is easily classified as a good guy or bad guy. Everyone is much more complicated than to be assigned such easy labeling, and it makes for a compelling adventure as well as complex character study.

The main character in the film, adapted from Donald E.Stewart’s original story, is army captain Joseph Blocker, a lifelong Calvary man who has little use for his enemy. He bitterly complains of the slaughter he’s seen firsthand done by the indigenous tribes and he loathes being ordered by his superior Colonel Biggs (Stephen Lang) to accompany a dying chief back to his Indian territory. The cancer-stricken Chief Yellow Hawk (Wes Studi) has been imprisoned for spearheading many attacks on the army and yet he will be allowed to return to his land to die as to restore some honor and peace amongst these warring factions.  Their rivalry would seem to be set up as the main conflict in the story, but filmmaker Cooper is more interested in defying obvious expectations. In fact, he turns a dozen or so western tropes on their ears as hes pools out a more surprising narrative. Most of what we observe is not exactly as it seems, including the hatred between these two sworn combatants. Blocker may seem like an unyielding bigot at first, but he’s more thoughtful. And the reticent chief is not a wily ‘wolf in sheep’s clothing’, waiting for his opportunity to strike and take a few scalps, but rather someone who has evolved past his hate. Each man will come to see the truer man inside as they face the elements and the wilderness together.

Cooper surprises us with how he handles a host of other stock characters too. Rosamund Pike plays Rosalie Quaid, an innocent ‘school marm’ type who is rescued after her family is butchered by a band of rogue warriors, but she isn’t some weak ninny out in the brush. Instead, she’s adaptive, shrewd, and soon becomes a trusted ally to Blocker. Meanwhile, certain supporting players act differently than we’d expect. Certain stars die earlier too. And others survive much longer than we’d assume.

Timothee Chalamat, having quite a big year onscreen what with this film as well as starring turns in CALL ME BY YOUR NAME and LADY BIRD, shows up too. He plays Private DeJardin and seemingly is set up as the classic boy who becomes a soldier in these sorts of stories, but his arc is short-lived and keeps up Cooper’s narrative surprises at every turn.

More confounding of expectations occur with Master Sergeant Metz (Rory Cochran), the close friend and loyal second to Blocker. He’s not quite the staunch and by-the-book soldier we assume at first. Similarly, the Chief’s son Black Hawk (Adam Beach) isn’t quite the hothead we expect him to be, even after his wife is raped in the story. Even Ben Foster’s Sgt. Wills is more complex than just being a new villain introduced halfway through the picture.

Bale isn’t getting much awards buzz but he gives one of hismost affecting performances in his long and distinguished career here. He doesn’t have a lot of dialogue, and the majority of his performance is reactionary,but his face conveys more than most actors do with pages of dialogue. And Pike is revelatory, running the gamut from hysteria to nurturing, and it’s one of the best supporting performances on film in 2017. It’s a shame she isn’t getting much awards buzz either.

All the actors make strong impressions, including Bill Camp as a badgering reporter, Jesse Plemons as a sensitive lieutenant, and late in the game, Scott Wilson as a crusty land owner. Studi and the rest of the actors who make up his Indian family – Beach, Q’orianka Kilcher,Tanaya Beatty and Xavier Horsechief – play dignity and soulfulness brilliantly, but their characters remain a touch two-dimensional. Perhaps the intent was to keep them mysterious throughout, never quite knowing what they’rethinking or about to do, but they’re underdeveloped. It’s especially confounding given that the story’s aim is to look a tall the hostile parties involved with better clarity.

Despite many violent set pieces and a sense of dread throughout, HOSTILES is rather inspiring in its final analysis. The more the characters in HOSTILES are forced to be together, to rely on each other as they struggle through the terrain and the treachery around them, the more they learn to rely on each other. It’s a fitting and timely lesson to those in power in this country today who would marginalize or forbid a people from their rights or ability to enter this country simply because of their race or religion. If Captain Blocker can learn to unblock, perhaps there is hope for those in D.C. too often displaying an utter blockheadedness in their thoughts, words and deeds. 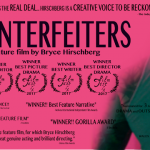