But better late than never, right?

My feelings about Lewis were always decidedly mixed. I greatly admired his work, of course, as he was a brilliant comic, a daring and experimental film director, a passionate humanitarian, and a surprisingly superb dramatic actor. (Everyone remembers his great turn in Martin Scorsese’s THE KING OF COMEDY, but how many of you remember his heartbreaking work on the TV series WISEGUY in the 1980s?) I love many of his films, most notably THE BELLBOY and THE NUTTY PROFESSOR. I’ve watched both of them many, many times. I also enjoyed his earlier work with Dean Martin, both the films and the nightclub act, though sometimes his manic persona could grate.

Even more grating was his snide demeanor and often self-pitying self-absorption that came out in a lot of his personal life, interviews, and those moments as himself. A lot of such bile was often on display in the waning hours of those marathon Muscular Dystrophy Telethons he hosted for decades. He would get cranky, was clearly tired, and embittered about his critics who criticized his work for the charity. Granted, there was something a bit too possessive about Lewis constantly referring to the children he was helping raise money for as “my kids” or “Jerry’s Kids. It became such a prevalent part of his persona that when comedian Martin Short wanted to create an imitation of the man for the variety series SCTV, he based his withering impersonation of the comedian upon one of Lewis’ bitterest diatribes during a late telethon hour. We laughed at Short so hard because we all recognized the angry man that Lewis so often was.

Still, like Sinatra or Streisand, or any other overly egotistical and insecure performer, it is their talent that always shines through to the forefront. Therefore, I can overlook a lot of Lewis’ anger and frustration towards show business. Maybe he never felt loved enough, and it certainly was the case in his childhood, as well as his decades in Hollywood. He’s not spoken of with the likes of Chaplin, Keaton and the brothers Marx. Still, he was a giant and should have gotten better acclaim that he received. The tributes to him in the past weeks have been wonderful. I hope Lewis saw them from the heavens.

There is so much rich work to remember and that’s why I will always treasure happening upon one of his classic comedies, or that hilarious bit where he pantomimes to “The Typewriter” song, or his stellar supporting turn opposite Robert De Niro in that 1982 dreamed about show biz that should have netted him a Best Supporting Actor Oscar. Lewis ultimately did win the Jean Hersholt Humanitarian Oscar in 2009, but his contribution to the art of cinema was as more significant than all of his charity work. Funny, but Jerry was both sides of the theater masks – both comedy and tragedy. It’s hard not to think of the two Mr. Lewis’ when remembering him.

But mostly, I’ll remember how much he made me laugh. 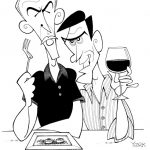 COOGAN AND BRYDON MAKE FOR A DELICIOUS COMEDY TEAM IN “THE TRIP TO SPAIN”illustrated, Review 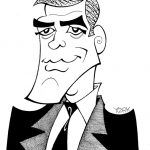