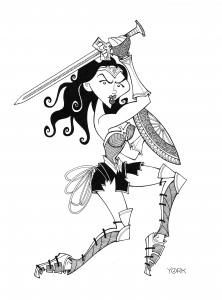 Why has the new big-screen version of WONDER WOMAN struck a chord with so, so many?

Perhaps it has something to do with loyal fans waiting for decades for a WW movie and their joy at seeing it materialize so spectacularly. Maybe it’s because Gal Gadot already won audiences over with her scene-stealing turn in last year’s otherwise dour BATMAN VS. SUPERMAN: DAWN OF JUSTICE and fans were ready for more of her clever take on the role. Certainly, a lot of it had to do with talented filmmaker Patty Jenkins avoiding the dark, aloof tone that has characterized the DC style for too many big screen outings now.

No matter, the WONDER WOMAN movie did huge box office its opening weekend and was the number one film worldwide. Praise for the movie was near universal too, holding at a 93% “certified fresh” rating at RottenTomatoes.com. I believe that there are many factors that contributed to its sterling success, probably too many to list in this blog. Still, I can think of ten right off the bat that made it so wondrous. (Warning: Spoilers lie ahead.)

WONDER WOMAN IS AN OPTIMIST
The vicious snark of Deadpool is hilarious. As is Tony Stark’s glib banter. And I understand why Batman is so dark and dour – his parents were killed in front of him – I get it. But Princess Diana (AKA Wonder Woman) is earnest, kind, and a believer in humanity. She’s no cynic trying to keep an ugly world at bay. She wears her heart on her sleeve and that makes her unique in the superhero movie world. It also makes her quite the elixir considering the depressing news dominating our newsfeed almost daily these days.

GAL GADOT IS TRULY FUNNY
Not only was Allan Heinberg’s WONDER WOMAN script exceedingly clever, but Gadot manages to be many things – heroic, relatable, and yes, very funny. She plays the ‘fish out of water’ angle of the story here with great line readings and expert physical humor. Particularly memorable is when she struggles to feel comfortable in the confining dress styles of the early 20th Century. Her acting achievement in this film reminded me a lot of what Christopher Reeve did when he took on SUPERMAN in 1978. He made being stalwart incredibly appealing as he portrayed his confident Kal-El side, but he also showed real comic chops vamping as Kal-El’s corny and klutzy Clark Kent. Diana doesn’t create such an alter-ego, but as Gadot plays the role, she is always noble and pure, and the actress knows how to make such affectations often appear humorous, especially as she doesn’t quite understand all the cynicism around her. Here’s hoping that Gadot is an early Best Actress Oscar contender for her complex, nuanced, and truly accomplished performance in this equally amazing movie.

PATTY JENKINS DID A SUPER JOB DIRECTING IT
It’s great that Jenkins was chosen to helm the film as there has been too much of a white, male, fanboy sensibility permeating comic book adaptations. Her natural insights into knowing how to fight the good fight in the male dominated business of Hollywood clearly helped her understanding of the Amazon princess’ resistance to the prejudices of global patriarchy. But the fact is, Jenkins is a great director no matter what her sex. She knows how to keep the focus on the story, let the characters drive the action, and shoot set pieces with clear and clean through lines. Jenkins also knows that while such set pieces are rousing, she takes the stand that war is still hell. She never loses sight of that in how the battles are shot. Jenkins better be handed the sequel, and she should be fielding dozens upon dozens of other offers after this singular achievement.

WONDER WOMAN IS NOT OGLED
Sure, too many male characters make remarks about Diana’s looks in the film. One even wants to be dropped on her home island because his lust is elevated by the idea that everyone there would be just like her. And yes, Steve Trevor makes Diana wear glasses to hide her beauty, which is a bit sexist as well. Such moments are my only real quibbles with the film, but at least Patty Jenkins’ camera never ogles her. There are no lecherous POV or up-the-skirt shots like a few that made their way into BATMAN VS. SUPERMAN. Jenkins made sure to keep such things at bay. Even Wonder Woman’s costume doesn’t have the plunging neckline as it did in the comic books and the Lynda Carter TV series from the ’70s. This movie is all the better for avoiding easy sexism. And frankly, so is the audience.

CHRIS PINE BREAKS YOUR HEART
When Chris Pine was announced as Steve Trevor, we knew he’d ace the funny aspects of the flying ace. (He’s an expert comic performer – just check out his roles in SMOKIN’ ACES and INTO THE WOODS.) But who knew he’d break our hearts here? When he dances with Diana in the snow and confesses he has no idea what a normal life is like, there is such sadness in his admission that it creates a lump in one’s throat. And Pine does his best screen acting ever when Trevor sacrifices himself by taking out the threat of the bombs on that big plane in the third act. As he realizes doing so will win the war, his face shows pride, but then it turns to fear at the prospect of dying, and ultimately, he looks sad as he wonders if Diana heard him tell her he loves her. It made me cry. I’ll bet it made everyone watching in theaters cry. Such a moving movie moment. Here’s hoping Pine’s an early contender for an Oscar too.

THE STAKES OF WORLD WAR I GROUND THE STORY
There’s nothing wrong with fighting the Loki’s of the galaxy, or made-up blob monsters mixing Kryptonite with Lex Luthor’s DNA, but a genuine historical war adds so much weight. In “The war to end all wars”, millions died or returned home maimed, and Jenkins makes sure we are keenly aware of such stakes at play throughout WONDER WOMAN.

THE VILLAINS ARE TRULY VILLAINOUS
David Thewlis, Danny Huston, and Elena Anaya have all played villainous characters before and they’re so very good at it. Here, they also play baddies, and they truly know how to bring out a character’s evil side. Action movies need strong bad guys. The success of good vs. evil stories depends on them. This film knows that and wrote three, count ’em three, truly vicious and evil adversaries into the story for our intrepid heroine to fight.

THE ACTION SCENES REFLECT DIANA’S CHARACTER
Sure, there’s plenty of Zach Snyder’s slow-motion tropes to accentuate the action here. He did develop the story and produce the film, after all. But here, when Jenkins slows the action down, it’s not done to show off filmmaking technique, it’s to highlight Diana’s strategic fighting style. The Amazonian isn’t out to be a killing machine, she’s out to stop more carnage. That’s why she doesn’t slaughter at will. Instead she is shown tripping up opponents by sliding their legs out from under them with hers. Diana often takes away their weapons too, or smashes them, rendering them useless as well. She also just knocks out a lot of the German soldiers. Granted, Diana does kill some, but by and large, her fighting remains humane.

THE BACKSTORY IS FASCINATING
Often a backstory can bog down a movie, but in this one, it’s utterly fascinating. The island of women could be a film all its own. All their training, the legend of Zeus and Ares, the hierarchy – it makes for a great narrative wholly on its own before Steve Trevor’s plane bothers to crash into the island’s waters. And in future films, if Diana ever returns home, it will be a welcome addition to future tellings.

NONETHELESS, SHE PERSISTED
Could the timing of a strong woman persisting, and winning come at a more appropriate time? Whether it was Ariana Grande returning to Manchester after the horrors of the London concert bombing, or his female victims united against Bill Cosby in court, or Angela Merkel emerging as the leader of the western world when Trump dumped all over NATO and pulled the USA out of the Paris accord agreement, this week was all about women standing tall and showing incredible heroism. Interestingly, Gal Gadot described feminism as equality, essentially stating that the word stands for people recognizing women as equals. Diana/Wonder Woman certainly demonstrated her leadership and equality to any male on screen, if not her downright superiority in every way. So many women demonstrate similar strengths all day long in every capacity throughout the world too. Thus, WONDER WOMAN is truly capturing the zeitgeist of the moment. She is that moment. 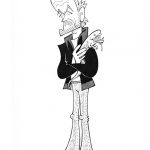 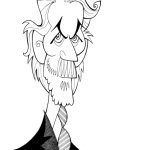