Yesterday was the one-year anniversary of Robin Williams’ death. It was a devastating loss, one I’m still not over. And now, to add more celebrity tragedy to the mix, Uggie, the acting dog who rose to international stardom in THE ARTIST (2011), has passed too. The 13-year-old was euthanized due to his losing battle against a prostate tumor. His passing has me in a mournful state as his work affected me in a way that few movie stars have. Many other film fans would say the same thing as THE ARTIST was a wonderful charmer of a film, and he was one of the keys to its phenomenal success. In fact, his work in that Best Picture winner is arguably the greatest animal performance ever captured on film. 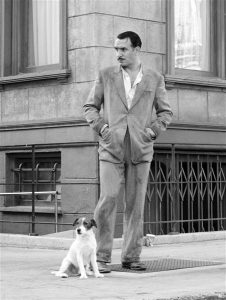 Uggie with Jean Dujardin in THE ARTIST.

THE ARTIST was perhaps the most unique winner of the Academy’s top prize ever. It was from France, in black and white, and for the most part, a silent movie. Producer Harvey Weinstein fell in love with it when it screened at Cannes and he backed it with his heart and money, all the way to Oscar night where it took five awards. And during awards season there was a very concerted effort to nab a supporting actor nomination for Uggie. Such was the triumph of his performance and the impact of his accomplishment.

Some may argue that most of Uggie’s performance was mere dog tricks. That’s partially true, just as any actor hits a mark or expresses emotion on cue, be they human or canine. Uggie’s performance was so much more than that though. There was something soulful going on in his eyes, manner, and actions. He was capable of expressing the dramatic, as well as the comedic. It was a truly rich performance, filled with personality. And the way he played off of Jean Dujardin was simply amazing to watch. They had such fabulous chemistry that when the French actor starting sweeping awards season, he always gave credit to Uggie in his acceptance speeches. 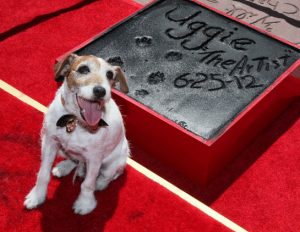 Uggie with his paw prints at the TCL Chinese Theater in Hollywood, CA.

Just revisit the film and you’ll see why. (Watch the clip below for the climactic scene where Uggie pleads with George Valentin to not commit suicide. You’ll be in tears!) Uggie was that astonishing throughout the film. And the little guy even had more screen time with Dujardin than any other actor in the film, including ingénue Berenice Bejo. And his best friend role to Dujardin’s Valentin is the most crucial to the story throughout the movie. After all, Uggie saves Valentin in that climactic scene, as well as perishing from the fire in the dramatic second act. The intensity of Uggie’s acting in those scenes is not cues and tricks. Uggie was an intuitive actor. And it’s his realism in those scenes that helped give the film gravitas.

Uggie had quite a career, starring in commercials, TV shows, and WATER FOR ELEPHANTS as well. Yet, it was THE ARTIST that put him on the map. It made him a star. It led to a best-selling “biography.” And it nabbed him the honor of being the first animal to ever leave footprints in the cement at the legendary Grauman’s Chinese Theater on Hollywood Blvd.

Uggie leaves behind a loving and amazing family of humans and fellow canines, headed by the masterful trainer and owner Omar von Muller. He also leaves behind millions of fans like me. His legacy is there forever preserved on film, and watching him work was one of my greatest pleasures as a moviegoer. Thank you, Uggie. You truly lived up to the moniker “artist” as well as “man’s best friend.” 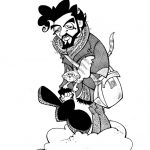 WHY OSCAR ISAAC IS THE MOST INTERESTING ACTOR WORKING TODAYillustrated, news 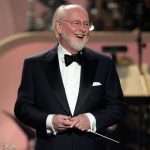 JOHN WILLIAMS GETS HIS DUE FROM THE AFInews, non-illustrated