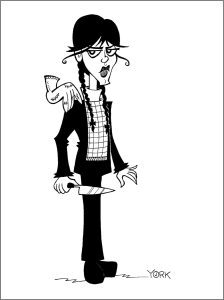 One might think that Netflix should have launched their new Addams Family spinoff WEDNESDAY, about Morticia and Gomez’s macabre daughter at Halloween. Yet, opening it on the Wednesday (of course) before Thanksgiving is actually perfect. It’s a feast of gallows humor, terrific acting, a teen angst plot worthy of any CW show, and wholly binge-worthy over the extended holiday. I dare say, it may be a series to that will appeal to the entire brood. Oh sure, its heroine at times gives Manson girl vibes, but she’s strong, moral, and even sweet at times. And in the title role, Jenna Ortega gives one of 2022’s best performances hands down. (Yes, that would be a reference to Thing.)

Ortega has big shoes to fill as Christina Ricci gave such an iconic performance as the character in two Addams family movies two decades ago. (Ricci is in the cast here, a wonderful bonus.) Ortega makes the role her own, however, playing Wednesday as a coolly droll Goth girl – edgy yet poised and delightfully deadpan. Her Wednesday’s emotions run from A to G, but Ortega does wonders with all the nuanced notes. It’s a disciplined performance that is a case study in comic economy. She stares down all comers and I don’t know if I ever saw her blink in the entire eight-hour run.

Good thing that Wednesday is cool as a cucumber too because the creators of the show, Alfred Gough and Miles Millar, throw a lot of plot at her. She’s trotted off to a private school after a run-in with her previous school’s swim team. As revenge on the jocks for picking on her little brother Pugsley (Isaac Ordonez), Wednesday dumped hungry piranha in their pool. Her parents (Catherine Zeta-Jones and Luis Guzman, strong in supporting parts) understand her anger but think she needs to make friends so they enroll her in their alma mater – Nevermore Academy.

The school has a Hogwarts vibe to it, albeit of the gothic horror kind, with a student body overrun with supernatural powers. Wednesday immediately rubs everyone the wrong way and her run-ins with various adversaries are bitchily comic hoots. Wednesday’s slew of insults and wicked bon mots are worthy of the snark Paul Rudnick wrote for Ricci in ADDAMS FAMILY VALUES.

Wednesday clashes headlong with the school’s posh and brittle Dean Weems (Gwendoline Christie), her perky roomie Enid (Emma Myers), the town sheriff (Jamie McShane), and student queen bee Bianca (Joy Sunday). There are also three boys interested in her: BMOC Xavier (Percy Hynes White), townie Tyler (Hunter Doohan), and nerdy beekeeping student Eugene (Moosa Mostafa). It’s a credit to the show that they don’t lean too hard into the RIVERDALE vibe with Wednesday staving off the drooling boys. Instead, the main plot is a mystery in the Nancy Drew way with Wednesday trying to figure out who’s turning into a wolfish beast in the woods and killing various locals.

By the middle of the season, the show gets bogged down some with too many competing story threads, including some extended flashbacks showing her parents as lovesick teens at the Academy. Some of the seriousness of the murders can cast a pall over the fun too, but anytime Wednesday is onscreen getting the best of someone, the show is buoyant. Ortega’s performance is surprisingly physical too with her running all about playing detective. Wisely, the showrunners give the single-handed Thing (Victor Dorobantu) plenty of screen time as Wednesday’s guardian, bestie, and Watson to her Sherlock. Dorobantu is a comic whiz, telling us so much with his gestures. And the (ahem) digit-al effects of Thing scampering about are truly special.

Tim Burton directed a number of episodes and is one of the producers too. You can see his touch in everything from the quirky production design, the stop-motion monster effects, and his wily way with actors. All of the cast is good with Myers deserving special mention, along with Fred Armisen who shows up in the penultimate episode as a charming and rather dapper Uncle Fester.

Still, this is Ortega’s show and she is riveting from her first appearance to the last here. Her timing and delivery belie her young age. I started to jot down some of her better quips but stopped because there were simply too many of them. She makes WEDNESDAY one of the year’s best shows, and if Netflix is smart, they’ll renew this show in a snap. On second thought, in the manner of the Addams Family theme from the 1960s TV show, make that two snaps. 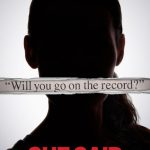 “SHE SAID” IS WELL DONE BUT MISSES GREATNESSnews, non-illustrated, Review 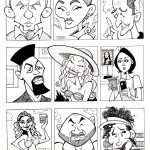 “GLASS ONION: A KNIVES OUT MYSTERY” LAUGHS AT THE TROPES OF MYSTERIESillustrated, news, Review