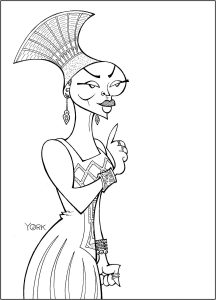 The first BLACK PANTHER movie stood out in the Marvel Cinematic Universe for many reasons. Its vast and diverse cast, stunning production design and costumes, and pointed commentary aimed at colonialism all established it as a unique action film with genuine depth and gravitas. Certainly, the film had a sense of humor, a rather wry one at that, but this was a superhero movie laden with seriousness, a million miles from the likes of Ant-Man’s shenanigans and Tony Stark’s snark.

The untimely death of the film’s leading man Chadwick Boseman only added to the franchise’s solemnity. So much so, that the filmmakers, including director Ryan Coogler, chose to kill off T’Challa in this sequel, rather than recast the role. Indeed, BLACK PANTHER: WAKANDA FOREVER starts with T’Challa’s untimely death, echoing Boseman’s shocking passing, and the mourning of the character (and by proxy, Boseman) takes up most of the first act. Little is explained about just how the Wakandan king died in the screenplay by Coogler and Joe Robert Cole, but it is attributed to some rare illness that sister Shuri (Leticia Wright) could not cure even with all her scientific acumen.

The death of the king shocks everyone in Wakanda, and all the major characters returning from the first film are given their moments to mourn on screen. Angela Bassett makes the most of her time as Queen Ramonda and portrays the dual grieving of both leader and mother with soulful dignity as few others can. She’s also utterly resplendent in her various frocks designed by Oscar-winner Ruth Carter, especially a delicate cream number worn for the funeral.

As the main plot kicks in, Wakanda finds itself dealing with interlopers trying to take advantage of the vacuum left by the passing of T’Challa. Various western nations, including the USA and France, are overly anxious to get their hands on the country’s Vibranium, Wakanda’s chief natural resource. (You’ll remember that Vibranium can power everything from electrical grids to weapons of mass destruction.) Helping protect the Vibranium against all comers is Namor (Tenoch Huerta), the leader of a group of underwater mutants off the coast of Mexico who also has an axe to grind with white colonialists. His intention in coming to Wakanda’s aid is to join forces with them and hold down the West with threats of Vibranium Armageddon.

Such themes, not surprisingly, echo those of the original film, but here the tone is wholly more grave than gratifying. The first film was able to weave inspired comedy and breathless action into the pointed narrative, but this sequel huffs and puffs trying to lighten its load. There’s little true levity, but when there is some, it feels strained. During an MIT college visit, Coogler tries to turn Okoye and Shuri into a comedic duo as they search the campus for science major Riri (Dominique Thorne), a Vibranium expert. Unfortunately, the banter between the two women feels amateurish and the quality of the humor feels only a few steps above ‘dad jokes.’

Martin Freeman returns as nervous CIA wonk Ross, and he has a few inspired comedic moments with his boss/ex-wife played by Julia Louis-Dreyfus, but those brief exchanges aren’t enough to properly lighten the film’s consistently dour mood. (Even the score seems to be stuck in minor keys.)  Huerta’s immortal villain is powerful and can fly, but he’s not all that scary and there’s no oomph to his performance. And despite Wright’s way with comedy in the first movie, her part this time out is far too pensive.

Even the action lacks buoyancy. There are numerous underwater fight sequences, but with all their slow-moving action, they too feel bogged down. Riri is underdeveloped, there are too many faceless blue minions battling on behalf of Namor, and the film struggles to make the most of Lupita Nyong’o’s Nakia character. Essentially, she’s here for one big plot reveal at the very end, but before that, the film fails to make the most of the Oscar-winning actress’ charms or skills. And perhaps it was the theater projection, but a lot of the cinematography and visual effects in this sequel look exceptionally murky. Are they supposed to be that way to reflect the overall sense of gloom?

The MCU seems to be swinging the pendulum a lot lately with some projects pushing the silly (SHE-HULK: ATTORNEY AT LAW) and others, like this one, stuck in the morose. Of course, it’s an utter shame that Boseman is gone, and it’s noble of Coogler, et al. to face the matter head-on in the story, but WAKANDA FOREVER shouldn’t feel like a 3-hour funeral. Boseman’s last take on T’Challa was his Emmy-winning turn in a comedic episode of the MCU animated streaming series WHAT IF? The plot there imagined what would T’Challa be like if he fronted the Guardians of the Galaxy. Why, he’d be hilarious, the episode answered. No one’s expecting that here, of course, but at least there could’ve been more of a similar joie de vivre. 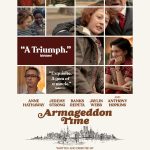 NOBLE INTENTIONS CAN’T SAVE THE MANY MISSTEPS OF “ARMAGEDDON TIME”news, non-illustrated, Review 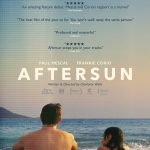