By Jeff York
Posted October 21, 2022
In news, non-illustrated, Review
THE “AFTER DARK” SHORTS AT THE CIFF SCARE UP PARODY AND WEIRDNESS2022-10-212022-10-21https://theestablishingshot.org/wp-content/uploads/2021/10/2021logo-1.pngThe Establishing Shothttps://theestablishingshot.org/wp-content/uploads/2022/10/mv5bntu1zgnkmmutnwm2os00ytlhltk2otktmwiyymezztzhzdfixkeyxkfqcgdeqxvymza2nta5mq._v1_fmjpg_ux1000_.jpg200px200px
0 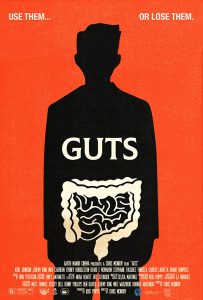 The Shorts series that the Chicago International Film Festival presents each year are a stirring collection of genres such as animation, documentaries, drama, and horror. The frighteners that make up the CIFF’s AFTER DARK shorts are almost always an eclectic range of truncated films from a number of varied countries and newbie filmmakers. They’re not always as terrifying or unsettling as a horror aficionado might wish for, but the select group is always worth watching for their chilling concepts and generally superb execution. This year’s batch is no exception and worth checking out virtually online or especially with an audience tonight at 10:30 PM. That’s when they’ll have their official premiere onscreen at the fest at the AMC River East 21 in the Streeterville area of Chicago.

This year’s AFTER DARK shorts, dubbed THINGS ARE NOT WHAT THEY SEEM, are indeed distinguished by their unusualness. Specifically, there are two key themes running through the lot: parody and weirdness. Some of the shorts are out-and-out comedies, satirizing the tried-and-true tropes of the horror genre with a zeal that even a casual fan would be able to recognize. And many of this year’s entries are just plain odd, aiming for a conceptual weirdness to unsettle an audience. That’s fine, especially as many of such shorts this year play out without traditional narratives or as much rhyme or reason as one might expect. But don’t worry, no matter how they spool out, there’s plenty in each to give you the heebie-jeebies.

Here are my capsule reviews of each of the entries this year:

Written and directed by Charlie Edwards-Moss and Joe Williams, O’GLORY concerns a psychiatrist and his assistant in 1970s England, examining the erratic Deborah, a young woman living in an isolated country house with her brother. The short is shot to look like all those old Hammer horror films from the period with its cockeyed camera angles, fish-eyed lens, and histrionic performances. It never goes whole hog in its satire, as Edgar Wright did in his faux trailer “Don’t” that was made to accompany the GRINDHOUSE double feature in 2007, but it shrewdly plays up the era’s tropes and stylization to maximum effect in this study of madness and the mayhem that ensues because of it.

Mixing real horrors of the Khmer Rouge with modern frightener sensibilities makes for some tough terror to watch in SWEPT UNDER from writer/director Ethan Soo. Alvin Heng plays Cam a refugee who escaped the regime during his childhood in Cambodia about to have a terrible night. He’s just moved into a new home and gets a strange gift from his adoptive sister Trisha (Lisa Dobbyn). It’s a rug from his homeland and it’s not exactly what one would call a housewarming present. Suffice it to say, Cam can turn his back on the past but the ghosts from his country of origin can’t as easily be swept under the rug.

Shot in rich tones of unsettling black and white, Fabio Colonna has written and directed a nightmarish study of a woman’s horrific nightmares. Her insomnia makes it difficult for her to sleep, let alone get a grasp what is real when she’s awake. Thus, the lines blur between nightmare and reality, as she confronts a series of terrifying shadows, discombobulating noises, and all sorts of nasty things that go bump in the night. The look of the film is both unsettling and gorgeous, and though the ending is a bit soft, it’s quite the rollercoaster ride up until then.

If you’re going to parody slasher films, especially when such satire has been done to death, you better be as cheeky as GIRLS NIGHT IN. This is a very cleverly executed short from director Alison Roberto and writer Landon LaRue, even if it’s not quite as fresh as the others in the showcase. Jess Adams plays Becca, a bespectacled young woman certain that a killer is lurking around her windows. The first few minutes with her in panic mode riff on everything from WHEN A STRANGER CALLS to SCREAM. Things really perk up though when her friend Delaney (Skylar Benton) arrives to help her stand guard. Soon, they’re battling the masked intruder (Brian Michael Henderson) who’s gotten in the house, as well as each other over who’s hottest to stop his bloodthirsty rage. It’s acerbic, bloody fun, and well-acted by the comically-inclined two leads.

The most effective of the horror entries this year is SUCKER and it’s easy to see where this high-concept short could get turned into a full-length feature. Filmmaker Alix Austin’s story concerns Sam (Sophia Capasso) looking in on her uncommunicative friend Caitlin (Annie Knox). Sam hasn’t heard from her in days and is horrified when she discovers that her friend’s home is not only in complete disarray, but there’s an unwelcome intruder who has moved in with her. This terror tale is explicit, gross, and a technical marvel. The special effects are remarkably good for such an inexpensive, indie effort. Austin is a real talent and even makes the end credits memorable. Here’s hoping SUCKER lives to suck some more in a big-screen franchise.

Think of the horror-comedy short GUTS from writer/director Chris McInroy as RE-ANIMATOR meets THE OFFICE. Brody (Jeremy King), a mild-mannered office worker wants a promotion but suspects that his disability may be holding him back. His soft spot? The man’s entire intestinal tract appears on the outside of his body. He carries it around like it’s practically a fanny pack. This short quickly turns into a ripe parody of office politics as Brody confronts all the naysayers as he sets out to prove himself worthy of climbing the corporate ladder to better times. There’s a tremendous ‘squish and ish’ factor here, but the film is a real howl if you can (ahem) stomach it.

An exorcism goes wrong in LA CEREMONIA, the shortest of the shorts this year. Filmmaker Isaac Berrocal Bravo deftly creates one horrifying scene after another via blackouts, showcasing a devil who doesn’t play fair or show any mercy. The ending could be stronger, but up until then, it’s a real nail-biter.

The final short on the program is a thoughtful dissertation on loss and grief. In THE DINNER AFTER, Lucy Doyle plays Angela, a young British woman returning home after an extended time away from Mum and Dad (Joanna Brooks and John Ramm). They sit down to a tense dinner that starts to unravel over Lucy’s veganism and her parents calling her by the name of her sister Lauren. Is Angela who she says she is? And what kept her away so long? Such answers await, but as directed by Matty Crawford and written by Paul Carey, it’s not all neat and pat. This story too could easily lend itself to a longer feature. It’s that good.

The AFTER DARK series is in theaters tonight at the AMC River East as the Chicago International Film Festival finishes up this weekend. If you’re a fan of the horror genre, see these shorts with an audience to scream along with them. 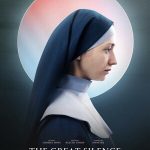 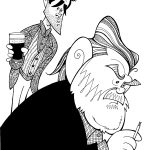 “THE BANSHEES OF INISHERIN” PAINTS THE END OF A FRIENDSHIP IN PITCH BLACKillustrated, news, Review