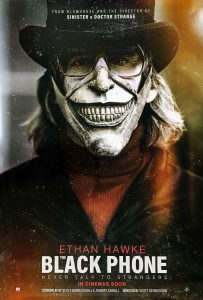 The short story by Joe Hill, upon which the new horror movie THE BLACK PHONE is based, tells a simple, deft, and harrowing story of child abduction in a mere 7,250 words. Writer/director Scott Derrickson and co-screenwriter C. Robert Cargill have adapted the yarn by adding a stronger sense of the supernatural to it, as well as other mysteries that add exponentially to the tense tale. The extra efforts increase the unsettling feeling throughout and will likely give audiences a lot more to think about after the credits have rolled. All in all, it’s a smart, detailed, and disturbing horror film, one that should get under your skin.

And yet, even with all those attributes, including a slyly, underplayed performance by Ethan Hawke as the kidnapper, the most notable qualities of the film are the expert performances by the two teen actors in the leads. They are Mason Thames playing Finney, the fifth boy who’s abducted, and Madeleine McGraw as his younger sister Gwen. As sharp a storyteller as Derrickson is, and his 2012 frightener SINISTER is one of the most harrowing horror films of the last 20 years, it’s his ability to direct younger talent, both under 14 at the time of filming, that stands out here.

The plot is fairly simple: a mysterious deviant is snatching young boys from a Denver suburb in 1978 and the sensitive Finney falls victim to him next. “The Grabber,” as he is called, drives a black van and fancies large, devilish masks to hide his identity. He cons Finney on the street, drugs him, and tosses him into the van. He then takes him to his home where he holds the boy in a dark, dank room with one barred window, a filthy mattress, and a dirty toilet.

There’s also a broken, black phone on the wall that will play a critical role soon, but as Finney wakes up, he’s terrified by his abductor sitting on the mattress with him, just watching. What his exact intentions are will remain a mystery to Finney for some time, as well as to those of us watching. The Grabber doesn’t say much and when he does, his delivery is in an upbeat, sing-song manner. We also don’t know exactly what’s happened to the other boys, though we can well imagine. Still, it’s one of the better parts of the film that such elements remain unknown. It places us in the fraught head of Finney all the more.

Whether he’s playing frightened, angry, plucky, or persistent in his will to stay alive, Thames conjures all of it vividly. He’s equaled by McGraw as she tries desperately to help local detectives find her brother, calling upon her clairvoyant skills to help in the search. Indeed, Gwen’s mystical talents add even more mystery to the proceedings. Are her dreams genuine visions of abduction or merely her imagination producing such pictures? Derrickson’s use of home movies further blurs the lines between what she is envisioning versus what she may have noticed in the neighborhood in the past weeks.

Such elements were a part of Hill’s original prose, as was the black phone ringing despite being broken. The phone seemed to be reaching out to Finney with messages from a previous Grabber victim, cajoling his latest catch to fight back. The short story made it clear that this was all in Finney’s imagination, a psyche deprived of food and sleep. In this adaptation, however, the filmmakers are suggesting that the phone is more of a vessel for legit supernatural assistance. Indeed, Finney not only talks to one victim but all four of the Grabber’s previous kills. It still might be mostly in Finney’s mind, but the possibility of there being more to it only adds to all of the mysteries at play here.

Gwen sees the ghosts too at times, but is it all in her head as well? That’s possible, knowing that both children have been steadily abused by their alcoholic widower of a dad (Jeremy Davies, doing what he can with a thankless role). Perhaps it is a coping mechanism for both, escaping into their own heads as a means of escape, whether being abused at home or by a stranger. No matter, McGraw’s range of emotions in dealing with all the trauma swirling around her plays as haunting as any ghosts entering Derrickson’s frame.

It was also wise to keep Hawke’s visage hidden, not to mention his back story and motivations. Such mysteries make the Grabber all the more insidious. Derrickson, et al. are suggesting that evil cannot always be easily explained. Sometimes, sick is just sick. And this film knows that even with its masks, ghosts, and clever jump scares, all the horrors you really need to understand are etched on the faces of the children reacting to the awful adults terrorizing them. 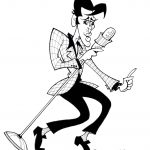 BAZ LUHRMANN GOES ALL OUT TO TELL HIS “ELVIS” BIOillustrated, news, Review 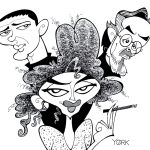