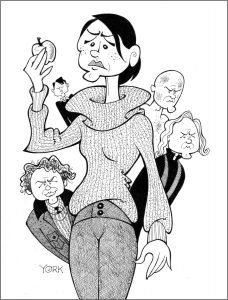 A beleaguered mind can drive any soul to the brink, especially one plagued by a distressing cocktail of anguish, guilt, and depression. In the case of young wife Harper (Jessie Buckley), wrestling with all three will turn her holiday away into a waking, unrelenting nightmare. Such is the premise for Alex Garland’s provocative new psychological thriller MEN. Ambitious, symbolic, and at times grotesque, the movie itself is a relentless mind f**k, a journey into the spiraling mind of its lead character as she encounters terrorizing men who exacerbate her trauma.

Harper thinks a trip far into the English countryside, far from her London flat, will help her acquire the peace and quiet she’s seeking after the shattering suicide of her husband James (Paapa Essiedu). Before he threw himself from their high-rise building, the couple had a nasty row about Harper’s decision to end their marriage. She felt suffocated by his domineering personality, and even in their last battle, he bullied and assaulted her. James even blamed her for any lethal consequences. Thus, his final act devastated her, gnawing at her psyche and leading her to examine those final events again and again. Will a week-long rest at a humble country cottage help ease her mind? Hardly.

After arriving, her issues only intensify due to the men she comes in contact with, all of whom echo a variation of bullying akin to her deceased mate. Geoffrey (Rory Kinnear), the owner of the cottage she’s renting, seems jovial and courteous enough at first, but when he chides her for helping herself to an apple off a tree in the yard, his passive/aggressive humor gets under the skin. From there, things grow increasingly tense for her. Harper discovers a dark tunnel on the grounds and is frightened when a man appears on the opposite end moving towards her. Then she discovers a nude man peaking in her windows and has condescending run-ins with everyone from the local policeman to the town vicar.

As exposed in the trailer, Kinnear plays the various roles of the men Harper encounters on her holiday, even a snotty 13-year-old boy via the magic of some deft CGI. Is Harper seeing things or does every man she meets, 13 or 30, seem to be cut from the same cloth? Garland lets such oddities percolate, enabling Harper’s grasp on reality to dissipate while leaving his audience just as discombobulated.

Buckley is superb, dialing up Harper’s madness with each subsequent scene, and yet demonstrating a fierce intelligence throughout as she tries to control her addled mind and the conditions around her. Kinnear does incredible work throughout, creating a half dozen distinct portraits of the male villagers, all giving off a veneer of civility while barely masking sexist contempt. Rob Hardy’s cinematography never oversells the jump scares but instead uses clever framing to reveal various horrors sneaking into the corners. The art direction, sound design, and dramatic score all further the exquisite sense of dread from the first moment to last, while even more visual effects in the third act push the Grand Guignol of it all.

Some of it pushes really hard, and the finale has to be seen to be believed. Still, Garland isn’t afraid to sail over the top to make his salient points. His timing is impeccable, of course, with the release of MEN coinciding with our nation’s continuing attempts to roll back women’s rights and lessen their citizenship. A more immediate tale about a woman battling back against female belittlement would be hard to fathom during this trying time and Garland’s take on the battle of the sexes is given all the more teeth because of it. Some of the narrative here may be hard to watch, but it will surely stick in your head long afterward. It did mine. That’s Garland’s intent; he wants to plant us right inside of Harper’s horrors as she fights to survive in a belligerent world of men. 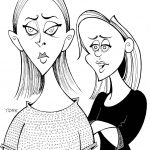 GRIEVING MAKES FOR FASCINATING DRAMA IN “ALL MY PUNY SORROWS”illustrated, news, Review, Uncategorized 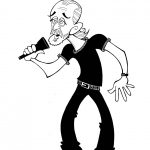