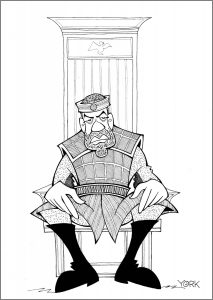 Original caricature by Jeff York of Denzel Washington in THE TRAGEDY OF MACBETH. (copyright 2021)

THE TRAGEDY OF MACBETH is William Shakespeare’s shortest and bloodiest drama. The story of an honorable warrior who is overcome by ambition has been told on many stages and screens, and now it’s the first solo film effort from one-half of the legendary filmmaking Coen brothers. It’s the first time Joel isn’t working with his brother Ethan, and his adapted screenplay and assured direction here is winning from the first second to last. The film is both highly theatrical and resoundingly cinematic, and it’s all done in a deft 105 minutes.

This Shakespearian drama couldn’t be a timelier film after the attempted coup in the United States this past January 6. After all, Macbeth is a character convinced that he deserves to be king, even if it requires utter skullduggery to achieve such goals. Still, Macbeth is a tragic hero, starting off in Shakespeare’s drama as a good man, a stalwart soldier, and a loyal servant of the king. Coen wisely cast Denzel Washington in the role, an actor who conveys integrity even when he’s playing shady characters. It keeps us rooting for this protagonist, even when he starts to antagonize.

The problems begin for Macbeth after receiving exorbitant praise from the Scottish King Duncan (Brendan Gleeson) over his bravery in battle. Proud and tall, Macbeth then encounters three witches who envision him becoming king. Could these soothsayers be correct? At home, Macbeth shares the witches’ prophecy with his wife and once the seed is planted in her head, Lady Macbeth (Frances McDormand) runs with it. Soon, she’s egging her susceptible husband on at every turn to expedite the succession by turning to treason.

But as soon as Macbeth kills Duncan to steal the throne, the new king becomes plagued by guilt. It consumes Macbeth, ratcheting up his paranoia and distrust of former friends and allies, turning him into an unstable and volatile monarch. Watching Washington spiral into madness is an incredible sight to see, one of the acclaimed actor’s most enthralling cinematic feats. And yet, Washington’s contribution is just one of the many breathtaking elements serving Coen’s fantastic vision.

The look of the film is astoundingly eerie, a blend of stylized sets from production designer Stefan Dechant and crisp black and white cinematography from Bruno Delbonnel. There are so many arresting images throughout, the film often plays like a fever dream for the audience. To counter such stylization, Coen wisely directs his cast to keep their performances grounded. The only performance that brushes up on the baroque comes from the estimable Kathryn Hunter as the three witches. (Yes, Coen decided to go with her as the face of the three.) Hunter’s soothsayer is a slithering, contorting snake of a sorceress, rasping “something wicked this way comes” while bending her body in ways that don’t seem humanly possible. It’s one helluva freaky-deeky performance, easily the most unsettling of the year.

McDormand, Coen’s wife, does an excellent job too, never overdoing the veiled sexual threats embedded in Lady Macbeth’s lines. Instead, Coen encourages her to play up Lady Macbeth’s backbone instead, giving her endorsement of her husband a ramrod certainty. Corey Hawkins’ Macduff makes decency exciting too, and all of the other supporting players register vividly throughout. All told, this version of Macbeth may very well be the finest film adaptation of the Bard since Kenneth Branagh’s auspicious debut with HENRY V in 1989.

Of course, one hopes that Joel Coen returns to filmmaking with his brother Ethan. They’re two of our foremost feature filmmakers and it’s doubtful their partnership is kaput. Still, if Joel is going to work alone, here’s hoping that his future output is as sharp and brilliantly told as his version of THE TRAGEDY OF MACBETH. 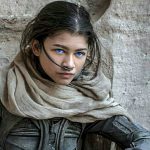 THE CHICAGO INDIE CRITICS ANNOUNCE OUR NOMINATIONS FOR THE BEST IN 2021 FILMSnews, non-illustrated, Review