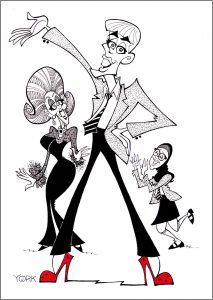 The new movie musical EVERYBODY’S TALKING ABOUT JAMIE is ironically titled as too few of such stories concerning the LGBTQ community get talked about enough. Quite often, when such stories do make it to the big or small screen, there is a feeling of dread in the telling as prejudice and discrimination are part of the community’s daily battles. But this new film, opening in theaters today and on Amazon Prime next Friday, is by and large an utterly jubilant one. It’s a compelling character study of a high schooler trying to live his best life, striving to be free to be who he is, and that includes being recognized as a gay man and one with dreams of becoming a professional drag queen.

EVERYBODY’S TALKING ABOUT JAMIE is adapted from the 2017 West End musical of the same name which was based on the true story of Jamie Campbell, an openly gay teenager in the UK who wanted to attend his high school prom in drag. That became a controversial move in his small, conservative, mining town of Country Durham, and the story became a media sensation. The stage musical and this movie both run with that concept, turning Jamie’s story, albeit changed in various respects, into the story of a teen who wants to live fabulously and very much in the public eye. Jamie’s brave, at times brazen, and he loves the limelight.

Here, the character’s name is Jamie New (a bit on the nose, I grant you), and he’s played by newcomer Max Harwood in one of the most auspicious movie musical debuts since Barbra Streisand starred in the film FUNNY GIRL back in 1968. Like the character of Fanny Brice that Streisand played in that story, Jamie just knows he’s ‘the greatest star.’ Jamie can sing, dance, and he’s beautiful too. (Hello, gorgeous!) It’s not surprising that he’s drawn to the glamorous life of show biz, especially coming from a poor small town where economic opportunities are extremely limited, let alone those for creative types.

Jamie has a vivid fantasy life, and he imagines himself fronting musical numbers with his classmates dancing around him. It’s a similar concept to the one employed in the film musical CHICAGO where Roxie Hart imagined herself and those in her orbit performing song & dance numbers in synch with each plot point. And as helmed by Jonathan Butterell, in his feature directorial debut here, those numbers come with neon lighting, sharp choreography, and exceedingly clever staging.

That’s not to say that Butterell’s film is all pizzazz. It’s got a lot of the same working-class angst that characterized Stephen Daldry’s 2002 film BILLY ELLIOT. Jamie’s mother Margaret (Sarah Lancashire, subtly bringing the pathos) worries about her non-traditional son in such a traditional community. Jamie’s father (Ralph Ineson) abandoned them for another woman and wants little to do with Jamie because the working-class stiff isn’t comfortable with the concept of homosexuality. Jamie faces prejudice at school too, being bullied by a number of cretinous youth, and marginalized by Miss Hedge (Sharon Horgan), his 11th-grade teacher.

Fortunately, Jamie has his BFF Pritti (Lauren Patel, another newcomer and a delightful one at that) to lean upon. He also becomes friends with Hugo Battersby, a thrift store owner who moonlights as drag queen Loco Chanelle at a popular club. As played by Richard E. Grant, Hugo is both flamboyant and sensitive, urging Jamie to fly his rainbow flag but also sharing troubling memories of the AIDS crisis. Grant is always great, and here, he is both hilarious and heartbreaking.

It’s not only extraordinary that such a tale gets told with such confidence and clarity, but that the narrative is happy to see that most of Jamie’s victories are small ones. The film resists the temptation to turn him into a bigger celebrity or have him perform on a BRITAIN’S GOT TALENT kind of show. Instead, Jamie’s ‘wins’ are gaining the respect of those in the town, being loved for who he is, even when he’s more than a bit bratty, and being able to wear a pair of glittery red pumps that would have made Judy Garland envious. The scene where he triumphantly struts his stuff in his crappy and cramped backyard, proudly showing off his new shoes, is touching like few scenes in a film this year. Frankly, the whole movie is just as moving from start to finish.

Tom MacRae has adapted his play faithfully and he’s keen at writing song lyrics too. The melodies by Dan Gillespie Sells, also from the stage play, aren’t quite as good and they lack a certain hummability. Still, the music displays a variety of motifs and is as affecting in the smaller numbers as well as the big showbizzy ones. Mark Everson’s editing wisely doesn’t try too hard, and Christopher Ross’s cinematography captures both the sheen of Jamie’s world as well as the shite.

Of course, it all comes down to how much audiences will want to talk about Harwood as Jamie, and the young actor manages to hold us in the palm of his hand throughout. Harwood’s got crackerjack comic timing and star quality aplenty. He and the entire cast of mostly unknowns ground the story in reality too despite all the fashion and flair. It’s a shrewd reminder that Jamie’s dreams are often a necessary escape from the drudgery and despair of such downcast towns, and that story couldn’t be a more fitting one to a world continuing to labor through the limits and fears wrought by a global pandemic.

EVERYBODY’S TALKING ABOUT JAMIE is very specific about the LGBTQ world, but it’s also universal in what it has to say about the need for everyone to be loved, respected, and seen for who they are. It’s got a lot of showmanship, but mostly, it’s got a helluva lot of heart. And more power to the filmmakers here for wearing it on Jamie’s sequined sleeve. 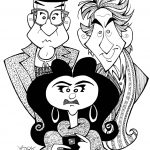 “ONLY MURDERS IN THE BUILDING” BUILDS ITS BIGGEST MYSTERY AROUND THE DETECTIVESillustrated, news, Review 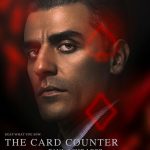